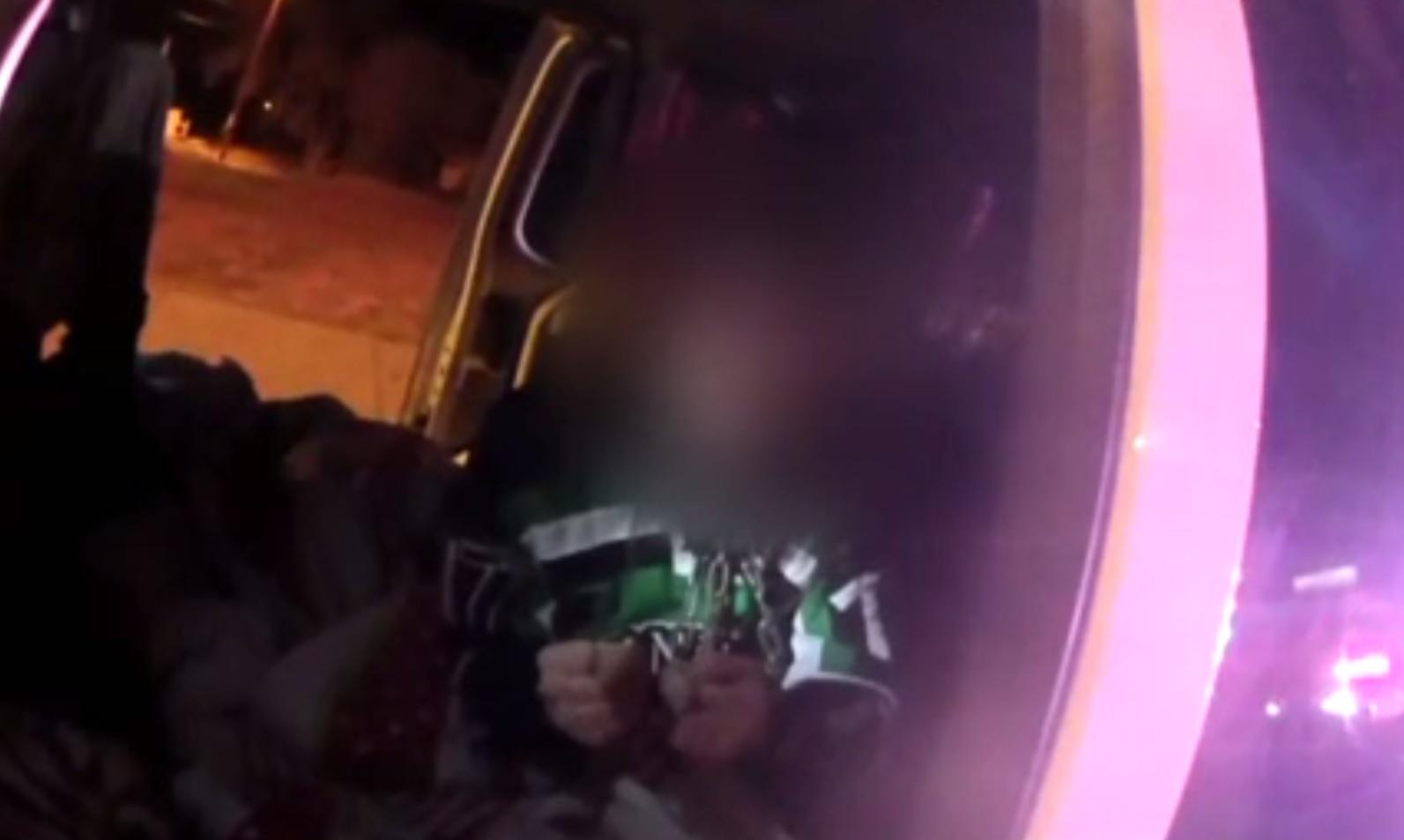 ALBUQUERQUE, N.M. -- Newly released video shows New Mexico police officers stopping a van that was wanted in connection with a Nevada kidnapping and then finding a woman bound by chains in the back of the vehicle.

Video from one of the officer's cameras shows the woman alive but shaken. "Oh my God, thank you," she tells the officers, her cuffed hands clenched into fists in front of her.

More than a year of planning went into the kidnapping, authorities said. The woman was stalked by an ex-boyfriend and his companion before they dragged her away from her apartment in Las Vegas in late January.

The suspects -- Jack William Morgan and companion Samuel Brown, who identifies as a woman and prefers to be called Sophie -- have pleaded not guilty to federal kidnapping charges and are awaiting trial later this summer in Nevada.

Dash and lapel camera video shows the late-night traffic stop on Jan. 30 in Espanola. After being unchained and helped out of the van, the woman told officers she had been dragged from her home almost 12 hours earlier.

"He dragged me out of the place, and I fought so (expletive) hard cause I was like, this is how you die," the woman told officers.

After police take Morgan and Brown into custody, video shows Morgan singing "Amazing Grace" while sitting in the back of the police cruiser. Brown is placed in the back of another police car and tells officers she's frightened.

According to a criminal complaint, Las Vegas police were called to the woman's apartment complex after witnesses reported seeing a woman wearing only undergarments being dragged down three flights of stairs. She was bound and gagged.

A witness told police the woman was put into a white van with Texas license plates.

Morgan's cellphone location led authorities to New Mexico, where police stopped the van. Officers reported hearing the woman screaming for help as they had Morgan and Brown get out of the vehicle.

The woman told New Mexico State Police investigators that duct tape was wrapped around her neck and across her face and that Morgan tried to hogtie her but she resisted.

Morgan was accused of choking the victim, resulting in her losing consciousness. The woman also had cuts and scrapes on her arms, legs, neck and face.

Morgan had contacted the victim a week before the kidnapping, and the two had coffee, court documents say. Brown was accused of following her to learn where she lived and then went door-to-door pretending to collect church donations to pinpoint her apartment.

A search warrant affidavit filed by New Mexico authorities stated that the woman told investigators Morgan was going to take her to a cave to "brainwash her to be his wife."