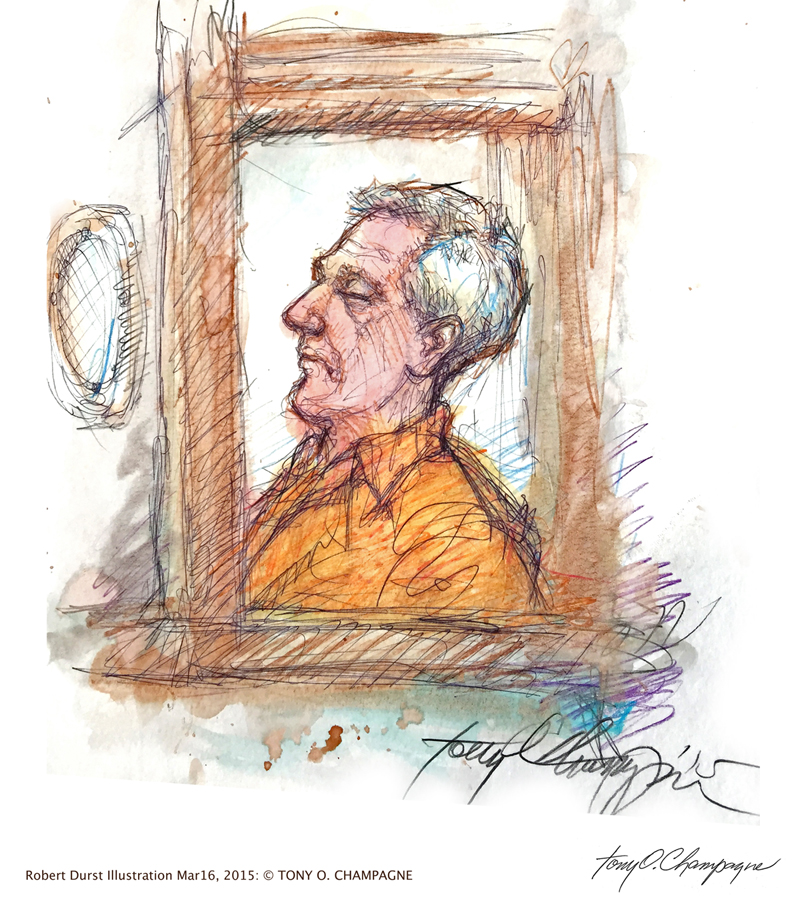 NEW ORLEANS -- A police report says real estate heir Robert Durst was in possession of a revolver when he was arrested at a New Orleans hotel on a murder charge in the 2000 death of his friend in Los Angeles.

Durst agreed Monday to face the murder charge in Los Angeles in the shooting 15 years ago of a mobster's daughter who vouched for him after his wife disappeared. But one of his lawyers said the trip may be delayed by possible new charges in Louisiana.

Durst was arrested on a murder warrant just before Sunday evening's showing of an HBO serial documentary about his links to three sensational killings -- his friend in Los Angeles, Susan Berman; his wife in New York, Kathleen Durst; and Morris Black, an elderly neighbor in Texas.

The heir to a New York real estate fortune was arrested over the weekend and had a revolver on him, according to a police report. On Monday, he shuffled into a courtroom with his hands shackled at his waist, wearing sandals and an orange jumpsuit. He appeared to fall asleep before the hearing, and later turned to the gallery and smiled. He answered "yes" to a judge's questions about waiving extradition.

Magistrate Harry Cantrell said Durst could now be taken to California, and that he could get pain medication in the meantime after attorney Dick DeGuerin said Durst has had "neurosurgery."

But DeGuerin later said outside court that the trip to California may be delayed because New Orleans prosecutors are considering other unspecified charges against him.

Louisiana law requires a permit to carry a concealed weapon. It was not immediately clear whether Durst had one to carry the revolver.

In the finale of HBO's "The Jinx: The Life and Deaths of Robert Durst," Durst was asked about similarities in handwriting in a letter he wrote and another linked to one of the killings. Later, filmmakers said Durst wore his microphone into the bathroom.

What followed was bizarre rambling in which Durst said, apparently to himself, "There it is. You're caught" and "What the hell did I do? Killed them all of course."

Durst participated in the documentary, giving an extensive interview to filmmaker Andrew Jarecki. Durst's lawyer, Chip Lewis, said nothing his client revealed changes the fact of his innocence.

Lewis spoke with "48 Hours" correspondent Erin Moriarty via Skype about his reaction to the documentary.

"I never in a million years thought what we were going to be left with were the mutterings of this elderly gentleman as he's in the restroom," Lewis told Moriarty, who has covered the case for more than a decade.

Defense attorneys told Moriarty that they would fight to keep the audio out of court, saying Durst had an expectation of privacy in the restroom.

Jarecki told "CBS This Morning" on Monday that he didn't notice the bathroom audio until months after the crew's second interview with Durst.

Lewis said he has no doubt the timing of the arrest was orchestrated in coordination with HBO's broadcast of the final episode. Jarecki told "CBS This Morning" that producers were "amazed ourselves that he hadn't been arrested for so long," but that authorities had never communicated with them about any pending arrest.

He said investigators have had the bathroom audio for "many months."

Durst, 71, has always maintained his innocence in the 2000 murder of Berman, whose father was an associate of Las Vegas mobsters Bugsy Siegel and Meyer Lansky.

After Berman's death, Durst moved to Texas, where, curiously, he lived as a mute woman in a boarding house until his arrest in 2001 after dismembered parts of the body of his elderly neighbor, Morris Black, were found floating in Galveston Bay.

Robert Durst -- the oldest son of the late real estate mogul Seymour Durst, whose Durst Corporation manages 1 World Trade Center -- became estranged from his family when his brother Douglas was chosen instead of him to run the family business.

Robert Durst had known tragedy from an early age - he said that when he was seven, his mother committed suicide by jumping off a building.

In 1982, Durst reported that his wife Kathie had suddenly disappeared from their cottage in South Salem, New York. No one was ever charged.