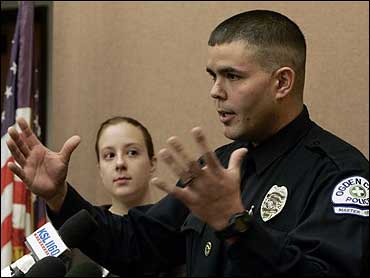 An off-duty police officer having an early Valentine's Day dinner with his wife was credited Tuesday with helping stop a rampage in a crowded shopping mall by an 18-year-old gunman who killed five people before he was cut down.

A day after the shooting, investigators struggled to figure out why a trench-coated Sulejmen Talovic opened fire on shoppers with a supremely calm look on his face.

The teenager wanted to "to kill a large number of people" and probably would have killed many more if not for the off-duty officer, Police Chief Chris Burbank said.

Ken Hammond, an off-duty officer from Ogden, north of Salt Lake City, jumped up from his seat at a restaurant after hearing gunfire and cornered the gunman, exchanging fire with him until other officers arrived, Burbank said.

"There is no question that his quick actions saved the lives of numerous other people," the police chief said.

"I feel like I was there and did what I had to do," Hammond told reporters. After spotting the gunman, he told his pregnant wife to take cover in the restaurant and went to confront the suspect.

Police said it was not immediately clear who fired the shot that killed Talovic.

Talovic had a backpack full of ammunition, a shotgun and a .38-caliber pistol, police said. Investigators knew little about Talovic, except than he lived in Salt Lake City with his mother and three younger sisters, police said.

Police say they have no motive for the rampage. Talovic had some minor juvenile incidents and dropped out of the Salt Lake City school system in November of 2004, reports CBS News correspondent Sandra Hughes.

"He was such a good boy. We don't know what happened," says Ajka Omerovic, Talovic's aunt.

Talovic drove to the Trolley Square shopping center — a century-old former trolley barn with winding hallways, brick floors and wrought-iron balconies, and immediately killed two people, followed by a third victim as he came through a door, Burbank said. Five other people were then shot in a gift shop, he said.

The victims were identified as Jeffrey Walker, 52, Vanessa Quinn, 29, Kirsten Hinkley, 15, Teresa Ellis, 29, and Brad Frantz, 24. Four people were hospitalized — a 44-year-old woman and a 53-year-old man in critical condition, and a 34-year-old man and a 16-year-old boy in serious condition.

Dean said his assistant manager called him, saying "someone's in the store killing people." The place was "all shot up," Dean said. He said three or four of the victims were shot inside.

As investigators began interviewing the 100 to 200 witnesses, people placed candles and flowers at two memorials outside the mall for the victims. Business owners surveyed the damage, and shoppers who had fled returned to pick up cars they had to leave parked overnight.

Marie Smith, 23, a Bath & Body Works manager, said she had seen the gunman through the store window. She watched as he raised his gun and fired at a young woman approaching him from behind.

"His expression stayed totally calm. He didn't seem upset, or like he was on a rampage," said Smith, who crawled to an employee restroom to hide with others. He looked like "an average Joe," she said.

Outside the mall, candles and flowers were left as memorials to the victims, who were identified as Jeffrey Walker, 52, Vanessa Quinn, 29, Kirsten Hinkley, 15, Teresa Ellis, 29, and Brad Frantz, 24.

"Thank goodness he was there," said Greiner, who is also a state senator. "You don't want to ever say it's good we were there and killed somebody, but it's probably good someone was there."

Accountant Jeff Barlow was on a date at a restaurant when he looked outside and saw the gunman firing from the hip.

"I thought it was some kind of joke — some kind of movie or stunt," Barlow said. "I didn't believe it was happening. And then I saw a man go down in a courtyard. I realized this was serious. These are real bullets flying around."

Also Monday night, a business meeting in Philadelphia turned deadly when a gunman, apparently angry over money, killed three men and critically injured a fourth before exchanging gunfire with police and then killing himself, police said.