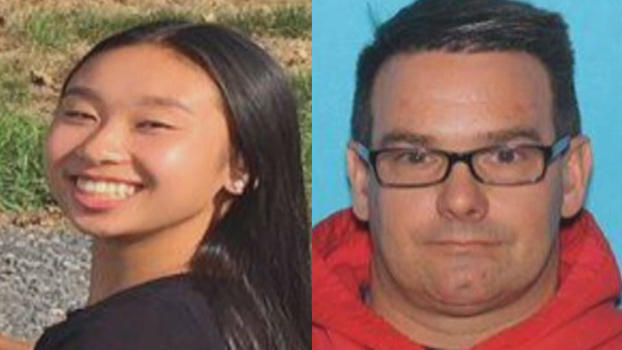 ALLENTOWN, Pa. -- On March 5, the same day she was reported missing, Pennsylvania teen Amy Yu and the 45-year-old man with whom she was allegedly in a relationship took a one-way flight to Dallas and then took a connecting flight to Cancun, Mexico, Allentown police said at a press conference Friday. Allentown police Capt. Bill Lake said Yu left the country willing with Kevin Esterly.

He pleaded with Yu to contact her family or get in touch with law enforcement in Mexico. On Thursday, authorities in Mexico issued an Amber Alert for Amy. The alert posted to Twitter on Thursday night says police believe the 16-year-old Yu and Esterly are in Mexico, and the teen may be in danger.

Lake said Yu was dropped off at a school bus stop March 5, but never boarded the bus to her charter school. She instead went to the Philadelphia International Airport with Esterly, where he bought the one-way tickets, Lake said. Lake said authorities have received numerous tips as a result of media attention and asked the public to call in if they have any information.

Authorities say the pair may have been involved in a romantic relationship. Yu's family previously said the two met at church years ago, and the girl is friends with one of Esterly's daughters.

School records show Esterly signed Yu out of school 10 times between Nov. 13 and Feb. 9. Police say the teen had changed school documents to list him as her stepfather.

Yu's mother, Mui Luu, told CBS News' Meg Oliver that she knew Esterly and trusted him. Esterly and Yu had gotten so close she often went on his family's vacations.

Luu says she also found text messages that suggested Esterly was romantically involved with her daughter, who is 16 -- the age of consent in Pennsylvania.

Oliver asked Mui Luu, "What do you want to tell Amy?"

Esterly's wife Stacy Esterly, in a statement released through a lawyer to the Allentown Morning Call, said that she and her husband fought about his relationship with Yu. She also pleaded with the teen to come home.

Esterly is facing an interference with custody charge, a third-degree felony, police say.