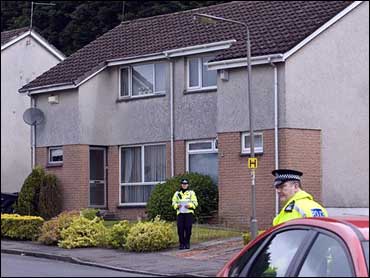 British police raided buildings near Glasgow and in central England and made a fifth arrest on Sunday, as the hunt intensified for suspects in the fiery attack on the Scottish city's airport and foiled car bombings in London.

On Saturday, two men rammed a flaming Jeep into the main entrance of Glasgow airport, shattering the glass doors and sparking a raging fire just yards away from people lined up at check-in counters.

On Friday, police thwarted an apparent plot to set off a coordinated bomb attack in central London when an ambulance crew outside a nightclub spotted smoke coming from a Mercedes that was found to be rigged with explosives. They found a second Mercedes filled with explosives hours later.

"We are learning a great deal about the people involved in the attacks here in Glasgow and in the attempted attacks in central London. The links between them are becoming ever clearer," said Peter Clarke, head of Scotland Yard's counterterrorist unit.

"I'm confident, absolutely confident, that in the coming days and weeks we will be able to gain a thorough understanding of the methods used by the terrorists, the way in which they planned their attacks and the network to which they belong."

The two men from the Glasgow attack were in police custody Sunday, the apparent driver under guard in Royal Alexandra Hospital with severe burns. Glasgow's Assistant Chief Constable John Malcolm said they were the only two in the Jeep.

A road in front of the hospital was closed Sunday as police carried out the controlled explosion, and ambulances were taking emergency patients to another hospital, police said. All other wards were open, police said. No explosives were found.

Early Sunday, police arrested two people — a 26-year-old man and a 27-year-old woman — on a major highway in Cheshire in a joint swoop by officers from London and Birmingham. Staffordshire Police Chief Superintendent Steve Loxley said officers raided addresses in the central town of Newcastle-Under-Lyme near the highway where the two were arrested.

A fifth suspect, a 26-year-old man, was arrested in Liverpool, and two homes were searched there, police said.

The latest police searches were taking place in a residential area about seven miles west of central Glasgow, police said in a brief statement. That is about one mile from the airport.

"We can confirm as part of the ongoing inquiry into the incidents in Glasgow airport and London, a number of houses in the Renfrewshire area are being searched," it said.

CBS News correspondent Sheila MacVicar reports that neighbors said a house being searched was rented a month ago to two Asian men.

"Al Qaeda has imported the tactics of Baghdad and Bali to the streets of the UK," said Lord Stevens, a former London police chief and Brown's terrorism adviser.

The new terror threat presents Brown with an enormous challenge early in his premiership — at a time of already heightened vigilance one week before the anniversary of the July 7, 2005, London transit attacks.

Brown, a Scot who replaced Tony Blair as prime minister on Wednesday, urged Britons to remain "constantly vigilant" about security. He said "Everything is being done in our power ... to protect people's lives."

"We will not yield, we will not be intimidated, and we will not allow anyone to undermine our British way of life," he told the British Broadcasting Corp. in a TV interview.

Glasgow police chief Willie Rae said a suspicious device was found on a man wrestled to the ground by officers at Glasgow airport and hospitalized in critical condition with severe burns. Despite speculation about a suicide belt or explosives, police later said the item had been found to be safe.

John Smeaton, who saw the attack, said the man shouted "Allah, Allah" as he was detained.

Police did not say whether the SUV that struck Glasgow airport was carrying explosives, but photographs of forensic officers inspecting the charred vehicle on Sunday showed several gas canisters next to it.

"What you've also got in Glasgow is ... an Iraqi-style bomb where you're going for a fortified target, and the fortified target was the airport lounge," former Scotland Yard Commander John O'Connor said on Face the Nation. "They couldn't just leave the car there, walk away, make the call to the mobile phone to complete the circuit and detonate, because it would have been seen immediately. So the only way they could deliver that, in as a destructive way as possible, was to drive it straight through up to front doors, a possible drive through the front doors, and then detonate on impact."

Glasgow airport reopened Sunday, although some flights were canceled. Cars were not allowed to drive up to the terminal building, and a tow truck arrived to remove the crashed Jeep.

Security also was stepped up at three of London's main airports — Heathrow, Gatwick and Stansted — as officials severely restricted access to drop-off and pickup areas used by cars, searched some vehicles, and urged people to travel to airports by public transportation.