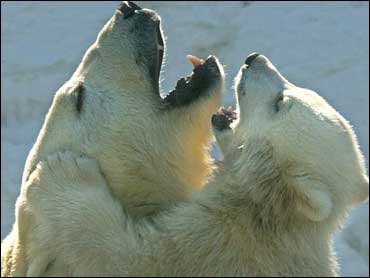 Polar bears and hippos are among more than 16,000 species of animals and plants threatened with global extinction, the World Conservation Union said Tuesday.

According to the Swiss-based conservation group, known by its acronym IUCN, the number of species classified as being in serious danger of extinction rose from about 15,500 in its previous "Red List" report, published in 2004.

The list includes one in three amphibians, a quarter of the world's mammals and coniferous trees, and one in eight birds, according to a preview of the 2006 Red List. The full report is published later this week.

"Biodiversity loss is increasing, not slowing down," said Achim Steiner, the conservation group's director general. "The implications of this trend for the productivity and resilience of ecosystems and the lives and livelihoods of billions of people who depend on them are far-reaching."

The Red List classifies about 40,000 species according to their risk of extinction and provides a searchable online database of the results. The total number of species on the planet is unknown, with 15 million being the most widely accepted estimate. Up to 1.8 million are known today.

People are the main reason for most species' decline, mainly through habitat destruction, according to IUCN.

Polar bears are threatened by global warming and melting ice caps, because they are conditioned for the icy environment and depend on Arctic ice floes for hunting seas. They are predicted to suffer a 30 percent population decline in the next 45 years.

The hippopotamus population in war-ravaged Congo, meanwhile, has plummeted by 95 percent, mainly because of unregulated hunting for meat and ivory in their teeth.

"Regional conflicts and political instability in some African countries have created hardship for many of the region's inhabitants, and the impact on wildlife has been equally devastating," said Jeffrey McNeely, chief scientist at IUCN.

Freshwater fish have suffered some of the most dramatic population declines because of human activities that damage their habitat, like forest clearance, pollution and water extraction. In the Mediterranean, more than half of the 252 endemic species are threatened with extinction. Seven species, including two relatives of carp, are already extinct, IUCN said.

The conservation union warned that the decline in wetlands and freshwater ecosystems will also damage supplies for humans of food, clean drinking water and sanitation.

Some 784 are listed as extinct — only a small increase from 2004 — while 65 are found only in captivity. But the situation looks a little brighter for some others, such as the white-tailed eagle and Indian vultures.

"Reversing this trend is possible, as numerous conservation success stories have proven," Steiner said. "Biodiversity cannot be saved by environmentalists alone — it must become the responsibility of everyone with the power and resources to act."