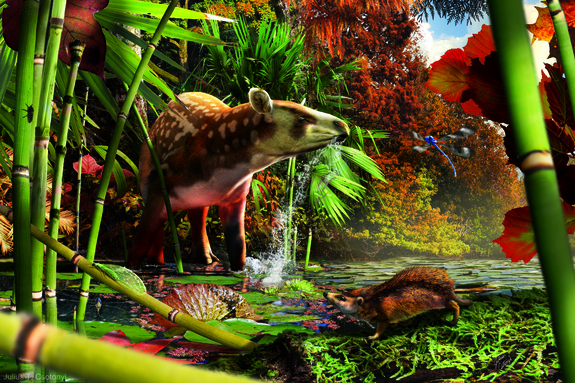 A miniature hedgehog smaller than a mouse and a pint-sized tapir are the first mammals ever found at a fossil site in British Columbia known for exquisitely preserved plants, insects and fish.

The new fossils date back about 50 million to 53 million years ago, to the warm Eocene Epoch, when British Columbia's climate was similar to that of Portland, Oregon, today. These are the first two mammals ever found at the dig site in Driftwood Canyon Provincial Park, and they fill in a gap the size of Canada.

"We know a lot about this time interval in Wyoming and Colorado. We know a bit about it in the high Arctic," said study researcher Jaelyn Eberle, the curator of fossil vertebrates at the University of Colorado Museum of Natural History. "But we know nothing about what was going on in between."

Scientists made this gap-filling discovery by accident. Study researcher David Greenwood of Brandon University in Manitoba and his colleagues were quarrying for plant fossils in the lakebed shales of Driftwood Canyon Provincial Park, when a student cracked open a rock and found a miniscule bone inside. [See Images of the New Hedgehog & Tapir Fossils]

"When they looked at it under a hand lens, they realized it was a fossil vertebrate," Eberle told Live Science. The bone turned out to be a partial jaw and some teeth belonging to a previously unknown species of hedgehog, dubbed Silvacola acares, from the words for "tiny forest dweller" in Greek and Latin.

This little hedgehog would have been only about 2 inches (5 centimeters) long, smaller than a house mouse. Its molars were a mere millimeter (0.04 inches) long, so small that paleontologists declined to chip the animal's tiny jaw from the rock surrounding it. Instead, the study researchers sent the whole hunk to Penn State University to be scanned with high-resolution computed tomography (CT), a technique that yields virtual slices of the interior of an object.

The tapir was equally surprising. Greenwood and his colleagues found it in coal-rich rock beds in the park, the site of a swampy spot in the Eocene and a rare place to find vertebrate fossils.

"It was just kind of, 'Whoa, not expected,'" Eberle said.

The tapir is a species of the Heptodon genus, which is part of a group that is the oldest in the tapir lineage. Species ofHeptodon would have been about half the size of modern tapirs, which weigh around 330 to 660 pounds (150 to 300 kilograms). (During the time these creatures lived, other animals were pipsqueaks, too -- the earliest known horse, which started out evolutionarily the size of a mini schnauzer, shrunk to housecat size during the warmest part of the early Eocene.) Heptodon probably ate leaves, which makes sense as it shows up in many forested Eocene environments, Eberle said.

The early Eocene was a steamy time on Earth. The breakup of the supercontinent Pangea came with no small amount of volcanic activity, which released billions of tons of carbon dioxide into the atmosphere. These emissions, among other greenhouse gases, heated the globe by about 11 degrees Fahrenheit (6 degrees Celsius) over roughly 20,000 years. The areas that now comprise Colorado and Wyoming hosted tropical rainforests, and ferns and trees thrived in the Arctic.

"This is the height of global warming since the extinction of the dinosaurs, so it's the time interval that people look at a lot for trying to understand global warming today," Eberles said.

A forest of mixed conifer and broadleaf trees carpeted Northern British Columbia, with palms and spruce living side-by-side, Eberle said. It would have rained often and frozen rarely, not unlike the climate in Portland today, 700 miles (1,126 kilometers) to the south.

"British Columbia is adding a new dimension to that time interval," Eberle said. "Not everything was hot and tropical."

The researchers reported their findings today (July 8) in the Journal of Vertebrate Paleontology.