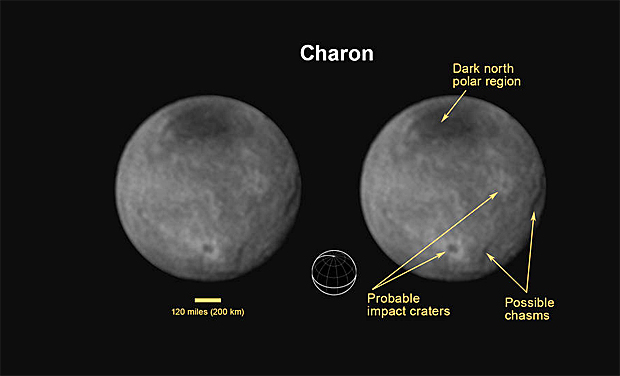 The image of Charon and the apparent chasms are "the first clear evidence of faulting and surface disruption on Charon," William McKinnon, a scientist with the mission's geology and geophysics team, said in a NASA web post. "New Horizons has transformed our view of this distant moon from a nearly featureless ball of ice to a world displaying all kinds of geologic activity."

Pluto and Charon, which is half the dwarf planet's size, make up what scientists describe as a "binary planet," orbiting a common center of mass well above Pluto's surface, rotating in gravitational lockstep every 6.4 days.

Planetary scientists believe Charon formed from debris blasted into space when a large body slammed into Pluto in the distant past. Other remnants of the collision make up the dwarf planet's four other known moons.

The latest image from New Horizons, captured on July 11, shows a 60-mile-wide crater in Charon's southern hemisphere with bright rays extending from its circumference that indicate a relatively recent impact. In this case, "relatively recent" means sometime in the last billion years or so.

Charon's north polar region also is intriguing. It is roughly 200 miles across and much darker than the surrounding terrain. Scientists are hopeful that increasingly sharp pictures and other data from New Horizons will help explain the differences in brightness.