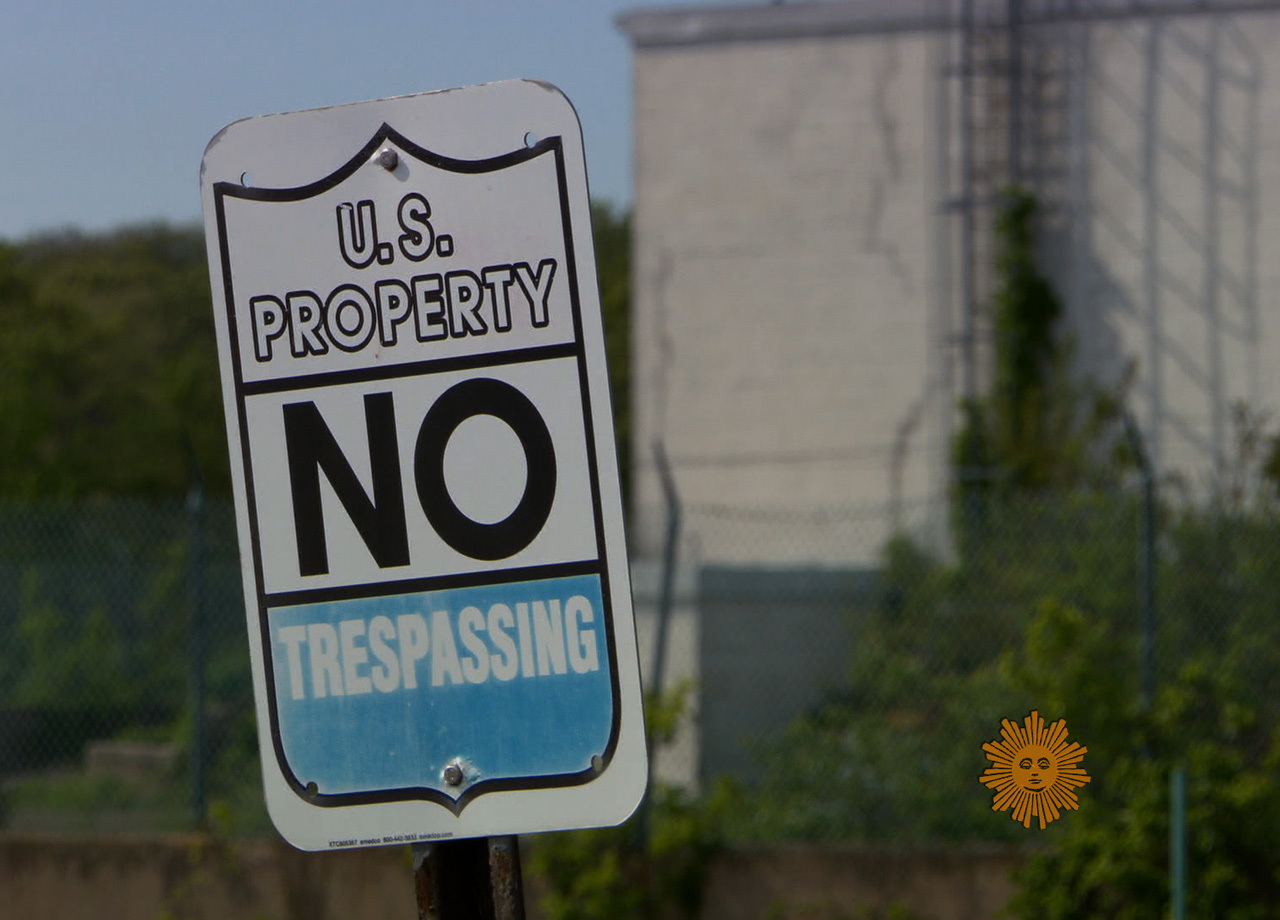 (CBS News) A place that's off-limits to most of us was in the news this past week. The federal government announced it has granted a license for a new foot-and-mouth vaccine . . . a vaccine developed at the Plum Island Animal Disease Center. With correspondent John Miller we get a rare inside look:

Plum Island sits at the end of New York's Long Island like a question mark. For nearly 60 years, controversies and mysteries have engulfed it.

And no wonder. The island is controlled by the Department of Homeland Security. Its labs are staffed by scientists from the United States Department of Agriculture. They come and go by special government ferries, guarded by armed officers.

We were asked not to film the docks on either side.

So what really goes on here? The USDA says scientists study diseases that can affect livestock, primarily overseas, to develop vaccines.

And although the government says the germs stored on the island affect only animals, that doesn't mean they're not dangerous. And information about them is strictly protected for security reasons.

"I cannot comment on our list of pathogens and the inventories and all those things that are sensitive information," said Luis Rodriguez, a research leader work for the Agricultural Research Service, an arm of the USDA on Plum Island.

Microbiologist Marvin Grubman said Plum Island used to be a battery for the Army before the First World War and into the Second World War - the idea being the island was going to protect New York City from invading armadas.

So today, why is Plum Island still guarded like an armed camp?

"Post-9/11 security in the U.S., and of course around the world, has increased because of the potential threat of the bioterrorist weapon," said Grubman. "So since we work with diseases of animals, it's in the U.S. interest not to allow potential terrorists to come in here and obtain a virus and distribute it around the world."

Is that the far-fetched plotline of a novel? Maybe not.

When Afia Saddiqui, an MIT graduate working as a scientist for al Qaeda was captured in Afghanistan in 2008, Plum Island was on a list of targets she kept.

Grubman said that the majority of the work being done at Plum Island is focused on foot and mouth disease virus. "Foot and mouth disease is an economically important disease," he said. "For instance, the outbreak of 2001 in the United Kingdom resulted in the slaughter of millions of animals and the loss of billions of dollar to the economy."

Grubman has worked on the island for some 36 years. He was evacuated during an outbreak in 1978 of the highly-contagious foot and mouth disease (formerly - and perhaps more aptly - called hoof and mouth) which overwhelmingly affects cattle.

"There was construction going on on the island and there was a release of virus from the laboratory," Grubman said, though he added that the virus never left Plum Island or reached the mainland.

Back then, animals were kept outside in pens, as seen in CBS News footage. When the virus escaped, it quickly spread from one animal to the next.

More than 200 animals had to be put to death.

A vocal critic of Plum Island is Michael Carroll, who detailed his reasons in his book, "Lab 257." He says the USDA's record of running the island is "somewhere between dismal and abominable. Their record is really a record of mishaps, outbreaks, people getting infected."

After the 1978 outbreak, biocontainment facilities (that's sealed laboratories and holding cells) were built and all animals were moved inside.

But just five years after that, there were two more outbreaks - this time, inside the biocontainment units.

"We have learned from those lessons," said Rodriguez. "So there are a lot of procedures. It's like an onion where you have layer over layer of safety procedures."

The Department of Agriculture says Michael Carroll hasn't been on the island in more than a decade. But Carroll told Miller he does not believe the changes have made a difference.

"I think there have been a bunch of what I would call façade improvements," Carroll said. "But in reality it's the same place it always has been."

The very history of Plum Island - a post-WWII Army biological weapons lab, the decades of secrecy and today's tight security - all seem to conspire to feed the rumors about what really goes on here.

The less that was known, the more people invented: Stories like that of the Montauk Monster, a creature spawned in the lab that escaped into the sea. Rumors about alien experiments.

But the most pervasive story is the one about Lyme disease. Carroll, a lawyer who admits he has no background in science, contends in his book that Lyme disease was fostered on Plum Island and spread.

Researcher Grubman denies the claim: "There is no scientific basis for suggesting that Lyme disease originated on Plum Island. In fact, the scientific evidence indicates that it did not."

And every other scientific expert we spoke to agrees. Durland Fish, the Lyme expert at Yale University, has said of Carroll's conclusions, "He should stop making these things up. It just scares people."

"The facts are they were researching hundreds of thousands of hard and soft ticks," said Carroll. "And at the same time, an unknown bacteria has found its way into the mouth of the Connecticut River in Old Lyme, ten miles away, where tens of thousands of birds fly."

In fact, a person can only get Lyme disease when a black legged tick infected with a very distinct bacterium attaches to the body and passes it on.

Researchers insist that neither the black legged tick nor the Lyme disease bacterium were ever on Plum Island.

There is, however, no controversy about this: Plum Island is in serious need of improvements.

"Here is a research facility that was built 55 years ago and yeah, it needs upgrading, of course, to meet modern capabilities," said Grubman.

Rodriguez likened the facilities to an old building, "and as any old house as we all know, it take more resources to keep 'em up but it is safe and it's functional.

The Department of Homeland Security plans to move the operations off Plum Island, to Manhattan - not Manhattan, New York, but Manhattan, Kansas, in cattle country.

But it doesn't look like it will happen any time too soon.

"It'll probably be eight to ten years until it's functional, so we have to be able to maintain the capabilities that we have here," said Grubman.

The move to Kansas was cut from the federal budget this year, and opponents say if foot and mouth disease escapes the lab there, it could do the most damage the fastest. But that objection hasn't stopped the plan.

Researchers Marvin Grubman and Luis Rodriguez say they understand people like a good mystery, but they say what really goes on at Plum Island is a better story.

"We're one of the best-kept secrets for scientific research in animal health in the U.S.," said Rodriguez. "We're very well-known internationally. If you ask any veterinarian anywhere in the world, they all know about Plum Island. For a scientist, it's really hard to take sometimes that you know that people when they talk about Plum Island, the first thing they talks about a monster or something like that.

"I think our good science speaks for itself, and hopefully people will see that."