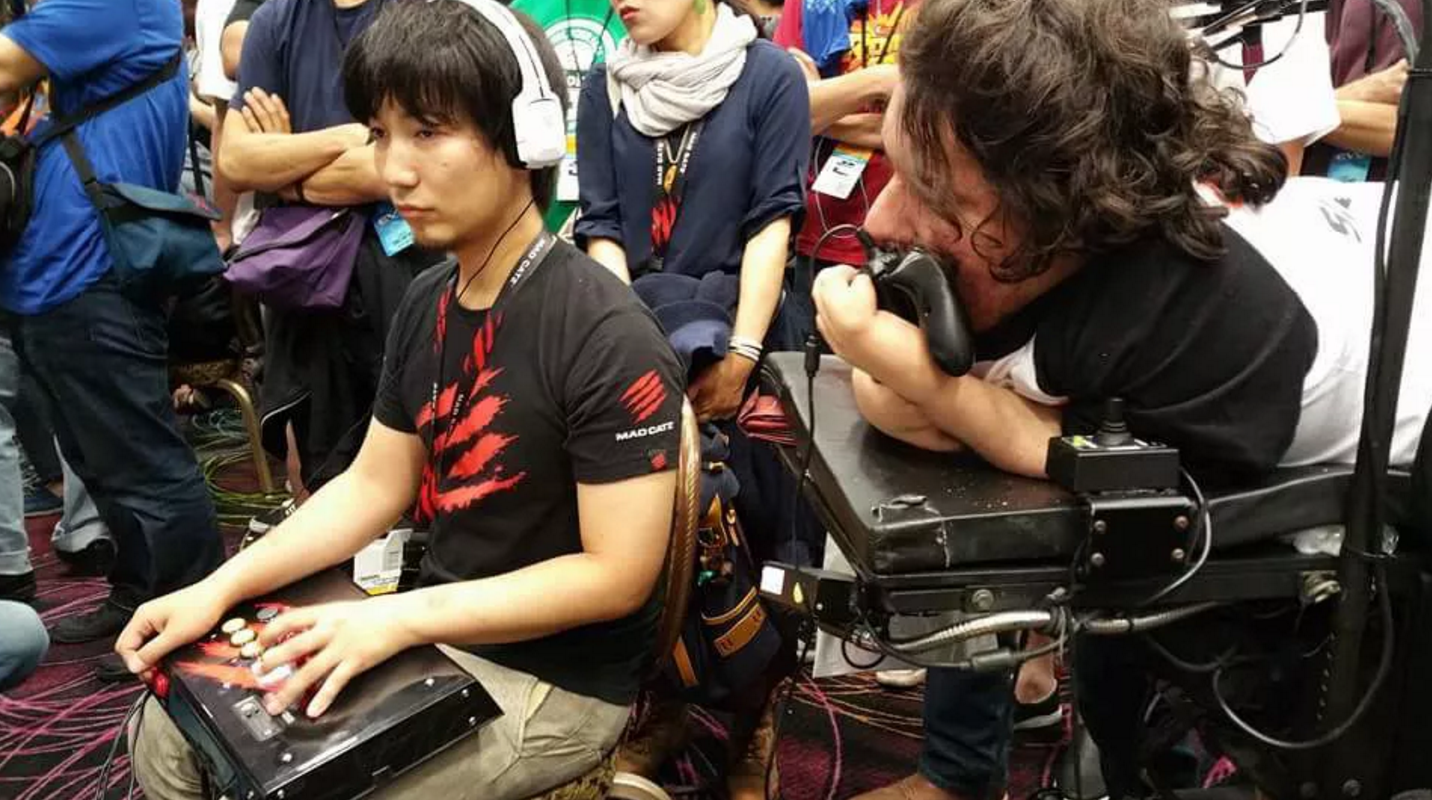 This is part of CNET’s “Tech Enabled” series about the role technology plays in helping the disability community.

Mike Begum is out to become one of the best Street Fighter players in the world.

And he doesn’t even need hands to do it.

Born with arthrogryposis, Begum has limited muscle development, so he plays the game using his face. The 28-year-old from Texas, better known as BrolyLegs, rose to become the top-ranked Chun-Li player online in Ultra Street Fighter IV and obliterates most opponents in his path.

He’s one of the 33 million disabled gamers in the US who have found a way to thrive in today’s sophisticated competition, according to the AbleGamers foundation. Because, let’s face it, video games have come a long way from text-based adventures that had you slowly type in commands on a keyboard. They move faster, require split-second reflexes and run on complicated controllers packed with buttons and joysticks.

Fortunately, gamers like Begum aren’t alone. Organizations around the world like AbleGamers work to help disabled people find new adventures through video games. People with disabilities are also finding workarounds, whether through custom-built hardware or software tricks, to ensure that they can stay competitive with the best players out there.

One in five gamers is disabled, according to a 2008 study, using games to improve their lives at home. For those who can’t leave their houses, games are a way to explore and go on adventures without going anywhere. Video games also offer a chance for players to be on an equal playing field, regardless of their disabilities. That’s one of the reasons Street Fighter pulled Begum in. People would give confused looks to Begum when they were matched up but then desperately scramble in fights once they started losing.

“Once you’re playing, it’s like the gloves are off,” he said. “I appreciate that more, because that’s what I’m there for, the competition.”

In his case, a simple tweak to the button layout upped his game.

Most fighting games allow players to remap your buttons for different commands, a feature added because people like to switch to arcade-style sticks.

Begum, who got his start playing Nintendo’s Super Mario Bros 3, changed the button layout to work with his unique play style. He plays on an Xbox 360 controller, putting his left cheek on the control stick and pressing buttons with his tongue inside his right cheek. Begum feels he has an advantage playing with his face, feeling less prone to input error, he said.

There are limitations. He can’t reach buttons away from the face of the controller, making shooting games nearly impossible. When he’s playing Super Smash Bros. Melee, Begum can’t dodge, shield or grapple, since all those buttons are on the shoulders. Still, he got fourth place at a tournament in Dallas, playing entirely on offense.

“That side has always been a demon to me, Begum said about the shoulder buttons. I’ve never been able to press them both,” Begum said.

In Kearneysville, West Virginia, about 90 minutes from Washington, DC and Baltimore, there’s a facility with a gamer lounge, two offices and a massive showroom packed with controllers, games and consoles. The space is filled with gaming treasures, like the only copy of Fallout’s original concept art, the Simon memory game signed by creator Ralph Baer and a 12-feet-high model of Songbird from Bioshock: Infinite. I’m in the Accessibility Lab set up by AbleGamers.

Visitors come by for consultation, where they get to test out different controller options to see what best fits their needs. I was there to tour the facility and meet Christie Moyer, who came from Maryland on a Saturday for one of those sessions.

Moyer has cerebral palsy in her right arm and leg, and suffers pain in her left hand when she plays, from stretching her hand across the keyboard for long periods.

“When I get home, I don’t even want to play video games, because that’s extra stress on my hands, and I just spent eight hours at a desk,” Moyer said. “We’re here trying to save that aspect of my life.”

AbleGamers was the right place for her. There are custom controllers it helped create, like the Adroit Switchblade, as well as hard-to-find one-handed controllers. I arrived before Moyer and found AbleGamers founder Mark Barlet and Jessie Hall, the head of research and development, preparing for her visit. They had just gotten a shipment of the last seven multifunctional panels from a company that was going out of business.

“It’s varied from person to person what we can do. Ultimately, the goal is to exploit movement,” Barlet said.

Originally built for graphic designers, the panels were custom keyboards where you can stick keys anywhere on the board and program each button to specific features. Graphic designers would use it for Photoshop to assign shortcuts to specific buttons, but Barlet saw that it could be retooled to be a custom controller.

When she got her hands on the panels, she started imagining where she would put each button, and what function she would assign. She could use her thumb to shoot, and her palm to reload, as she was experimenting with the layout.

Moyer also tried out the 3D Rudder foot panel controller, which would help her move and see in first-person games. The new play style will be tough to pick up, but she’s optimistic about being able to overcome her disability and start gaming again.

AbleGamers isn’t the only organization to help disabled gamers. Special Effect serves a similar role in the UK. It’s modded controllers to function like the joystick used by people in motorized wheelchairs.

The organization helps up to 300 gamers a year and thousands more by providing resources online, said Mark Saville, a spokesman for Special Effects.

Saville remembers helping a Call of Duty player by giving him a foot switch by the side of his wheelchair, in combination with voice control to play. That turned his game around.

“He’s in a wheelchair, he wasn’t just getting by in the game, he was absolutely busting it,” Saville said.

Barlet sees video games more as tools for disabled gamers to create “rich, social experiences” that they wouldn’t be able to have otherwise.

“You want to be able to have friends and achievements in life,” he said. “And sometimes, disabilities don’t allow that. That’s why video games are so important.”

Moyer missed playing games with her husband and hopes AbleGamers can help her. The two bonded over long campaigns in Civilization VI.

“That’s important, that multiplayer aspect,” Moyer said. “I wouldn’t have to be sitting on the couch next to him, we can play a two-player game, and that’s awesome.”

She bought Star Wars: Battlefront as a gift for her husband, Ben Moyer, but has never been able to competitively play against him. Recently, she’s been coaching him from the sideline as he plays The Witcher 3, but wants to be able to join him in multiplayer games where they can interact and engage with each other on the screen.

Advocates are also pushing for software developers to make their games more accessible.

Ian Hamilton, an accessibility specialist and contributor to Game Accessibility Guidelines, has been at the forefront of working with developers for disabled gamers.

“We’ve all experienced it at some point, that moment of frustration that takes you out of the moment, wrecks your immersion and enjoyment,” Hamilton said. “Just picture that amplified.”

Lucy Greco, a blind gamer who is also an accessibility specialist at UC Berkeley, calls this an “electronic curb cut.” While those curb cuts on sidewalks were originally created for people in wheelchairs, they ended up being helpful for strollers, bicycles and skateboards.

“Accessibility opens the opportunities for everyone, not just people with disabilities,” Greco said.

And for Begum, he’s using the opportunities to represent the disabled gamer’s potential. He’s received thank you messages from players around the world, and inspired a disabled player from Denmark to travel to Texas and learn under his wing.

“I was fortunate enough to work with my disability,” Begum said. “I think what I want to do is help other people overcome that.”

This article was originally published on CNET.