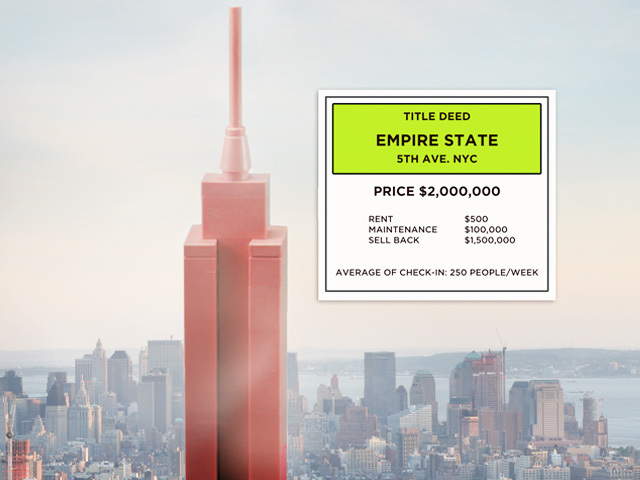 (CBS) - Ever wished you could collect rent on the Empire State Building? Well, now you can...sort of.

A new app currently in development is looking to turn your city into one giant Monopoly board. Built with the Foursquare API, Foursquaropoly is a social game that mimics the classic board game.

Players start with $100,000 to purchase available properties when you check in. If a visitor checks in to a space that has an owner, they must pay rent.

Properties can be bought and sold just like in the classic board game. Obviously, the more coveted locations will sell for big bucks. Being a landlord can be high maintenance, as you will have to pay rent weekly to keep your assets.

The app started off as a student concept piece by Deanna McDonald, Sean Tiraratanakul and Jaclyn Shelton for the Miami Ad School in New York City.

Naming and branding will change before the social game is released. Most likely because trademark issues that could arise, unless the developers can work out a licensing deal with Hasbro.

We reached out to the developers to inquire about a release date or beta test. At the time of this writing, they have not responded.Check back for updates.