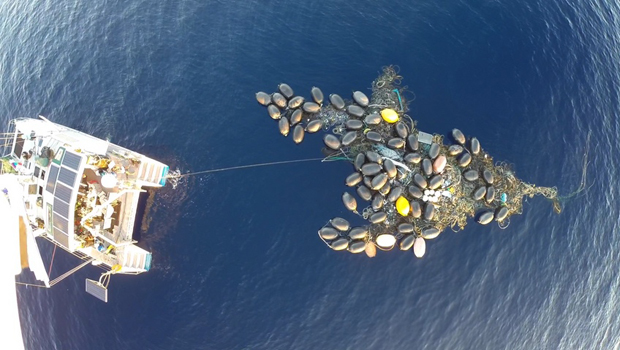 After returning from the Transpacific Yacht Race -- an annual sailboat race from Los Angeles to Honolulu -- in 1997, Capt. Charles Moore was guiding his boat through the doldrums when he noticed some plastic debris floating in the water.

Though it didn't seem like an overwhelming amount of trash, he recorded log entries every hour, noting the bits of debris in the water. Toothbrushes. Bottle caps. Eel traps. Floating nets. Soap bottles. On and on it went.

Given that he was in the Pacific Ocean, halfway between California and Hawaii, with nothing nearby, it was odd to find such a long stretch of trash, Moore said.

"It's the most remote part of our world," Moore told Live Science.

When he reached solid land, Moore told scientists about what he found, then returned two years later to assess the extent of the garbage patch using more scientific sampling methods.

And thus began the story of the great Pacific garbage patch, a swath of plastic debris, chemical sludge and other trash the size of Texas that is trapped in a vortex between ocean currents. [See Images of the Pacific's Trash Island]

Now, 15 years later Moore has returned to the garbage patch, along with five other people, to track its extent once again and study its impact on marine life. The expedition is part of Moore's organization, Algalita Marine Research Institute, a nonprofit focused on reducing marine plastic pollution. People learned more about Moore's voyage at the Cabrillo Marine Aquarium in San Pedro, California, on Sunday, where he answered questions from his boat via a live satellite webcast.

One thing they've discovered so far is that there may be more trash on the ocean surface than previously thought. A 2014 study in the journal Proceedings of the National Academy of Sciences found that the ocean's plastic may be mysteriously disappearing, with much less debris in the water than had been predicted, based on the global rates of plastic production and disposal.

But that estimate relied on trawling for trash with nets. On his current trip, Moore did a similar 4.5-mile (7.2 kilometer) trawl of the ocean, but also used drones to assess the extent of trash from above.

"We found 100 times more plastic by weight with the drone, than we estimated from the trawl," Moore said.

The team is also studying the impact of the plastic on marine life. So far, they have found that about 35 percent of the fish they sampled have swallowed some plastic, Moore said.

The team has also found more permanent fixtures in the garbage patch's landscape. For instance, the team has discovered a "trash island" more than 50 feet (15 meters) long, with "beaches," a "rocky coastline," and "underwater mountains" and reefs made up of ropes, buoys and other plastic debris, Moore said.

Moore speculates that the island formed after the tsunami that battered Japan in 2011 swept a tremendous amount of ropes, buoys, mooring lines and anchors out to sea from Asian aquaculture farms that were harvesting mussels and oysters.

"It's showing signs of permanence," Moore said. "There will be a new floating world in our oceans if we don't stop polluting with plastics."