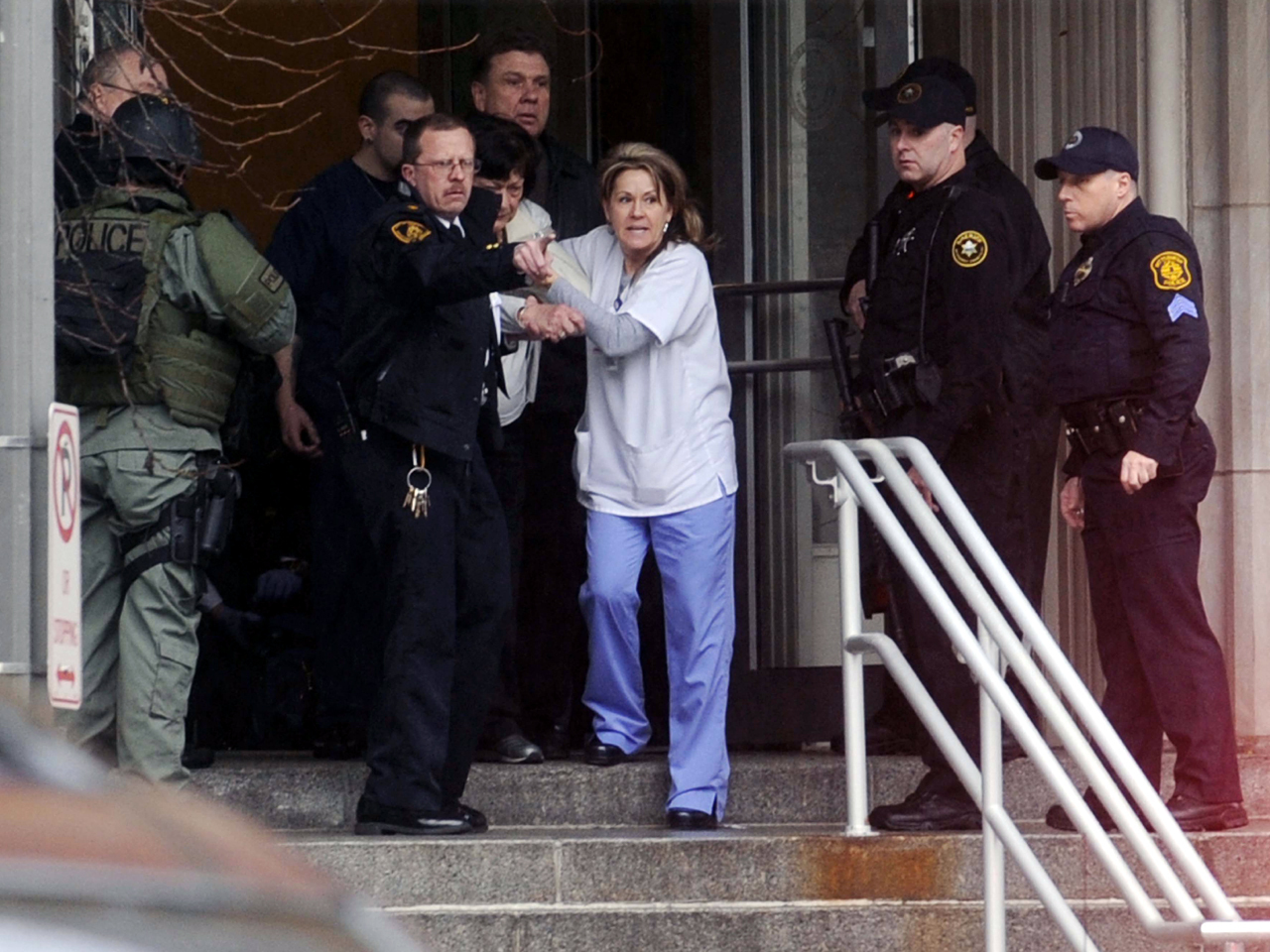 CBS/AP) PITTSBURGH - Investigators have identified that John Shick of Shadyside was responsible for the shooting at Western Psychiatric Institute and Clinic at the University of Pittsburgh on Thursday during a press conference.

The 30-year-old man walked into the lobby the building and opened fire. The man had two semiautomatic pistols traced to Texas, one of which has been identified as stolen. He shot seven people -- including 25-year-old Michael Schaab, of Edgewood, who was pronounced dead at the scene at 3 p.m., about 80 minutes after the shooting began, according to the medical examiner. An eighth person was hurt, but officials say that injury was not gunshot-related. The surviving victims are all expected to recover.

During today's press conference, authorities confirmed that at least one University of Pittsburgh police officer shot and killed Shick to end the rampage. Shick had been trying to escape, but found himself locked out because he did not have a passcard. After shooting into a window panel that did not shatter, he went into a stairwell leading to the parking garage, which is where he met armed officers.

Authorities said there was a name on the victim at the time of death, but he had no identification on him. They tried various ways to identify him, but they had issues looking up his driver's license information. The gunman's fingerprints were run through a nationwide database used by police and federal agencies, including the FBI and CIA, to no avail, the Allegheny County Medical Examiner's Office said Friday.

Police haven't said what prompted the shooting or whether they think the gunman had any connection to the clinic or his victims. They say it's too early for them to have determined if Shick has any criminal history or mental health problems, and confirmed that there was no indication that he spoke to anyone. However, the mother of the slain worker said Friday that she doesn't believe the shooter knew her son.

Mary Schaab, the dead victim's mother, told The Associated Press on Friday that authorities have told them "absolutely nothing" beyond notifying them of her son's death. A state trooper from a barracks nearest to their Greensburg home brought the news to the family late Thursday night.

Until the trooper arrived, the family was glued to television news reports but assumed her son was safe, Schaab said.

"We sat and watched the news for hours and not even thinking (he might be a victim) because he worked on another floor, an upper floor," Schaab said. The shooting occurred in the first floor lobby.

Schaab said her son had worked at the clinic since graduating with a psychology degree from Pitt, and was going back to school to get his master's in occupational therapy. He had also recently gotten engaged.

Michael Schaab had just one sibling, a sister Nancy, 26, who was fatally shot during a domestic dispute in October 2010. Her live-in boyfriend is serving 6 to 15 years in prison for voluntary manslaughter.

Schaab said her son loved his job and that his patients and their families thought highly of him.

"I have letters from patients' families that just raved about him, about how good he was to their spouses or mother or father," Schaab said. "He was the best person in the whole world."

The clinic was open Friday and police and extra security could be seen checking employee's identification as they entered the front lobby, where authorities say the shootings occurred.

Gregory Brant told the AP he was barricaded in a first-floor waiting room when the gunfire began about 1:40 p.m. Thursday. For 15 minutes, it was fear and pandemonium.

Brant, 53, and six other people, including a young girl and her parents, were in a waiting room when the chaos began. They cowered in a corner, hoping they wouldn't be seen. But the men in the room quickly decided that if the gunman entered, they'd rush him.

"We were kind of sitting ducks," Brant said. "Luckily, he didn't see us in there, and we didn't make eye contact with him."

Officials at the University of Pittsburgh Medical Center said they were treating five patients aged 35 to 64, including two who had undergone surgery. The hospital isn't releasing patient names, but said a 49-year-old man and a 64-year-old woman were still listed in serious condition Friday morning.

John Leight Sr., of Shaler Township, told the AP that the 64-year-old woman is his wife, Kathryn Leight, a receptionist at the clinic, but otherwise declined comment when reached at home.

"At this point I still don't know what happened," he said.

Leight's son, John Jr., told the Pittsburgh Post-Gazette that the family has been told his 64-year-old stepmother had been shot four times and underwent emergency surgery. He said the woman remained in intensive care, but had been taken off a ventilator and was breathing on her own.

Two others were treated and released, according the hospital officials.

One of the injured was a police officer who was grazed by a bullet. The injured people included employees and a visitor, said Dr. Donald Yealy, chair of emergency medicine at the university's medical school.

The clinic is a couple of miles from downtown, near the heart of the Pitt campus and its affiliated medical center.

Pitt sent out email and text alerts shortly after 2 p.m. to warn people of the shooting.

"An active shooter has been identified at Western Psychiatric Institute. Several injured," the alert said. "Possible second actor in Western Psych. Lockdown recommended until further notice. If safe to do so, tell others of this message."

Reports about a possible second gunman and a hostage situation at the clinic or at a nearby hospital were unfounded, UPMC spokesman Paul Wood said later.

Ravenstahl said authorities are still investigating whether the gunman reached the second floor of the clinic building, since there were reports of shell casings there.

SWAT teams shut the street off and adjacent buildings were put on lockdown. But a few blocks away people went on with their business. Most students are on spring break, though offices and buildings are open.

The psychiatric clinic has 292 beds but reported more than 372,000 outpatient visits and just over 11,000 emergency room visits in 2010, along with $79 million in research funding.

UPMC chief executive Jeffrey Romoff said the health network was "deeply, deeply saddened by today's events" and expressed "deepest sympathy to the victims and their families."