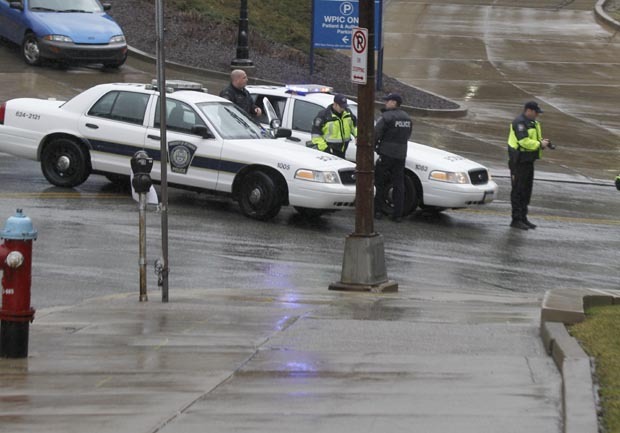 (CBS/AP) PITTSBURGH - A man armed with two semiautomatic handguns entered the lobby of a psychiatric clinic at the University of Pittsburgh on Thursday and opened fire, killing one person and wounding several others before he was shot dead, apparently by campus police, the mayor said.

The mayor stopped short of confirming the gunman was fatally shot by at least one University of Pittsburgh police officer who responded. But he confirmed "police acted admirably and did engage in gunfire."

Shooting witness Gregory Brant said he was in a waiting room on the first floor of the clinic building when pandemonium broke out.

"We heard a bunch of yelling, some shooting, people yelling, `Hide! Hide!" he said. "Everyone's yelling, `Stay down!"'

Brant, 53, and six other people, including a young girl and her parents, barricaded themselves inside the waiting room. But he said they did not feel safe because there were doors with windows along adjacent walls.

"The way the room was arranged, if he (the gunman) had gone to either window and would have seen us in there, he could have done whatever he wanted," Brant said.

The group crouched in a corner, hoping the gunman wouldn't see them as he went past, Brant said. The men in the group decided on the spot that if the gunman entered the room, they would rush him.

"We were kind of sitting ducks," Brant said. "Luckily, he didn't see us in there, and we didn't make eye contact with him."

A witness, who did not want her name disclosed, was inside Western Psych and said a man came in and started firing, CBS affiliate KDKA Pittsburgh reported. "I believe first he hit the receptionist and then just started shooting, said the witness. "At that point, I hit the ground and the Pitt police drew their guns and was shooting back, so it just was pretty much chaos, but it was pretty much under control very quickly - as much control as it could be."

One of the injured was a police officer who the mayor said was grazed by a bullet. Officials didn't say if that officer shot the gunman, whose identity and relationship to the clinic, if any, weren't disclosed. The injured people included employees and a visitor, said Dr. Donald Yealy, chair of emergency medicine at the university's medical school.

Neighboring buildings were placed on lockdown for hours, police said.

University of Pittsburgh Medical Center spokesman Paul Wood said media reports about a possible second gunman and a hostage situation at the clinic or at nearby UPMC Presbyterian hospital were unfounded.

A SWAT team was on the scene shortly after the shooting. A street was blocked off, and the area thronged with police. Most students are on spring break, though offices and buildings have been open.

The University of Pittsburgh Medical Center said it had received some patients from the shooting. It said two patients were in intensive care, two were released and three were being admitted. All were expected to survive.

The clinic, Western Psychiatric Institute and Clinic, is located in the city's Oakland neighborhood, a couple of miles east of downtown, and is affiliated with the University of Pittsburgh Medical Center and one of several affiliated hospitals adjacent to the university campus. Other schools are nearby, including Carnegie Mellon, Carlow and Chatham universities.

Pete Finelli, who lives two blocks from the clinic and once worked there as a student nursing assistant, said security guards are always at the part of the building where it the shooting is believed to have occurred, on the ground floor.

Patient rooms are on the upper floors, he said, but anyone on the first floor would have to be someone being either admitted or discharged.

"The only place a person would be on the first floor is the emergency room," he said.

Pitt sent out email and text alerts shortly after 2 p.m. to warn people of the shooting.

"An active shooter has been identified at Western Psychiatric Institute. Several injured," the alert said. "Possible second actor in Western Psych. Lockdown recommended until further notice. If safe to do so, tell others of this message."

Lawton Snyder, executive director of Pitt's Eye and Ear Foundation, said he and two other staffers were locked down about a block away, in a building that connects to the clinic. He said it was unnerving.

"Obviously I'm terribly sad for those injured. We're just hoping everybody's OK and things are resolved quickly and that they can apprehend those who are responsible," he said.

Patient Kevin Bonner, who was staying on the building's ninth floor, several floors above the shooting scene, said there was a normal atmosphere there, with patients in the common room listening to music, watching TV, drinking and eating snacks. Bonner said no one at the hospital had told them what was going on.

"They are probably just trying to keep a calm atmosphere," he said.

He said he had been napping and awoke to hear an announcement on the intercom: "Bronze Alert on the first floor."

"I didn't think I was hearing my ears right until I looked out the window" and saw police cars and a sniper, he said.

The alert and lockdown ended Thursday evening, but the University of Pittsburgh Medical Center asked that people avoid the clinic while the investigation continued. People were free to go when and where they pleased at the two network hospitals nearest the clinic, UPMC Presbyterian and UPMC Shadyside, which also had been locked down earlier in the day.