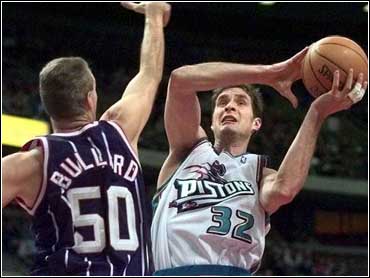 Grant Hill didn't take long to show the Detroit Pistons that he was ready to come back from a bruised back.

"It's incredibly obvious to say this, but we are a much better team with Grant on the floor," Pistons coach Alvin Gentry said. "It was good to have him out there. It was really, really good."

Hill helped the Pistons win their second straight after losing eight of nine. Things went much better this time than when he tried to play last week, struggling through a game-and-a-half before returning to the sidelines.

"It's still sore, but it isn't limiting me like it did the last time I tried to play," he said. "I could do everything pretty well, and that was nice."

"It was nice to have Grant back, because he gives all of us an edge," Stackhouse said. "He played really well, and that meant I could rest a bit."

Kelvin Cato scored 23 points and matched a career-high with 12 rebounds for the Rockets, who played without injured Steve Francis for the second game in a row. Bryce Drew matched his career high with 20 points.

"We need Steve back, but Bryce has done a great job running the team," Cato said. "We're not losing any steps there on offense, just maybe a little on defense. We played well, but Grant's a star. I knew he woulcome back before the All-Star Game."

Right from the tip, Hill looked like he hadn't missed a game, scoring 18 first-half points to help the Pistons take a 46-41 halftime lead. Cato kept the Rockets in the game with 15 points and seven rebounds.

Hill kept it up at the start of the third, scoring eight points in the first 3:30 to help Detroit extend its lead to 60-49.

Houston pulled within 60-54, but the Pistons went on a 9-0 run to take a 15-point lead. Terry Mills started the surge with a 3-pointer.

Hill finished the quarter with a driving layup, giving him 16 points in the quarter and Detroit a 80-67 lead.

Williams scored six quick points, but it still wasn't enough to put the game away. Hill's turnover gave the Rockets the ball with a minute left, trailing by six.

After a basket by Drew, Hill threw the inbound pass away and Detroit fouled Thomas. He hit both free throws to pull the Rockets within 103-101 with 40.4 seconds left.

But Hill calmly hit a 12-footer from the left wing, and after Cato's short jumper, Stackhouse made a pair of free throws.

"It wasn't pretty, but I'm not worried," Stackhouse said. "It's always hard to maintain a big lead in this league, but we made the plays at the end that we needed to make."

Drew, though, tried to look at the rally as a positive.

"That just showed us that no matter how far down you are, you can always come back," he said. "If we had won, we would have definitely snuck out with one because they were in control. But I guess it was encouraging to get close at the end."