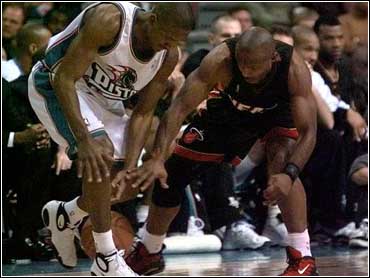 In two years with Miami, Terry Mills played just 51 games, and only one last season. Monday night, the Heat saw what they missed.

Mills had six 3-pointers one shy of his career high as the Detroit Pistons, winless in three games since the All-Star break, beat Miami 95-87.

"We knew he could shoot the 3," Alonzo Mourning said. "He didn't play with us because he was never in shape."

Mills, who has had the same doughboy shape since high school, didn't exactly disagree. He just used different terms.

"There's no revenge factor," said Mills, who scored all 18 of his points on the 3-pointers. "I was never healthy enough to help Miami. But it is always great to play well against a team that you used to play for."

Grant Hill scored 26 points and Jerry Stackhouse and Lindsey Hunter each had 22 for the Pistons, who have won three in a row at The Palace and 13 of their past 17 at home.

Mourning scored 20 points for Miami despite having his nose broken before fouling out with 2:24 remaining. Jamal Mashburn added 14 for the Heat, who went 1-3 on their four-game road trip.

"I look at it this way: When we play them again, it's going to be an all-out war," Mourning said. "I guarantee it."

That would be April 12 at The Palace.

The Pistons, who had a five-point halftime lead, hit six 3-pointers three by Mills to take a 75-64 lead into the fourth quarter.

But the Heat scored just three points the rest of the way, a free throw by Voshon Lenard and a jumper by Mashburn with 11.2 seconds remaining.

Miami was forced to foul and the Pistons had five free throws plus a basket by Jerome Williams down the stretch.

"Terry was the savior tonight," Stackhouse said. "That's what I have been saying. We need to realize that we can't rely on anyone but the 12 guys in this room."

Mourning's layup with 5:19 left in the quarter was the first field goal of the second half for Miami, which had five free throws to that point.

Hill, Stackhouse and Hunter accounted for all of Detroit's points in the second quarter.

With 3.0 seconds left in the half, Stackhouse whom the Heat tried to acquire last August slammed down an alley-oop pass from Hill to send the Pistons off with a 47-42 halftime lead.