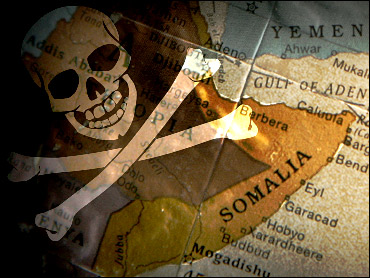 WASHINGTON - A Somali pirate who already had been ordered to spend 30 years in prison for attacking a U.S. Navy ship off the coast of Somalia was sentenced Thursday for an assault on a Danish ship that netted him and other pirates a $1.7 million ransom.

Jama Idle Ibrahim was ordered by a federal judge in Washington to serve a 25-year sentence for his role in an attack on the CEC Future. Because the sentence will run concurrently with a 30-year sentence already imposed in the case of the Navy ship, however, Ibrahim won't spend any additional time in prison.

The case in Washington is believed to be unique in that it's the first time a pirate known to have captured a ship and obtained a ransom was prosecuted in the United States. In 2008, Ibrahim and other pirates held the CEC Future captive for more than two months before being paid a $1.7 million ransom and departing.

Ibrahim and five other would-be pirates weren't as successful with a subsequent attack on the Navy's USS Ashland in 2010. The attack failed, and Ibrahim and the others were captured and taken to Norfolk, Va., where the Ashland is based.

Ibrahim pleaded guilty to both attacks and entered into plea agreements that require him to cooperate with investigators. That could include testifying against the others in the Ashland case, which is ongoing, and his cooperation could reduce his sentence.

Ibrahim, believed to be 39, told Judge Paul L. Freedman through a translator that he was sorry for what happened but asked that his sentence be reduced before acknowledging he wanted to accept the deal offered by prosecutors. His lawyer, Christian Connell, agreed to the sentence but said that the problem of piracy is bigger than Ibrahim, who got approximately $17,000 for his role in the attack. Piracy expeditions in the waters off Somalia are financed by people in the country who never leave, he said, and plenty of people are willing to carry out the attacks.

According to the International Chamber of Commerce's International Maritime Bureau, Somali pirates are currently holding 28 vessels hostage with nearly 600 people.

Freedman said he hoped the case would show other would-be pirates that they will be prosecuted, and he acknowledged the emotional toll piracy takes on sailors and their families. Sailors who were on the CEC Future wrote the judge letters explaining how the 71 days they were held captive changed them.

The ship's captain, Andrei Petrovich Nozhkin, said his wife and 16-year-old daughter now have to color their hair because it turned gray while he was held captive. The ship's cook, Iosif Yuzefovich Klebeko, wrote that he constantly feels anxious and fearful and is afraid to go to sea. He wrote that the pirates would "often demonstrate how they would cut off my head, just like a lamb, if they did not receive the money in time."

U.S. Attorney Ronald Machen, whose office handled the case, said after the sentencing that pirates like Ibrahim are nothing like the "swashbuckling heroes" portrayed in movies.