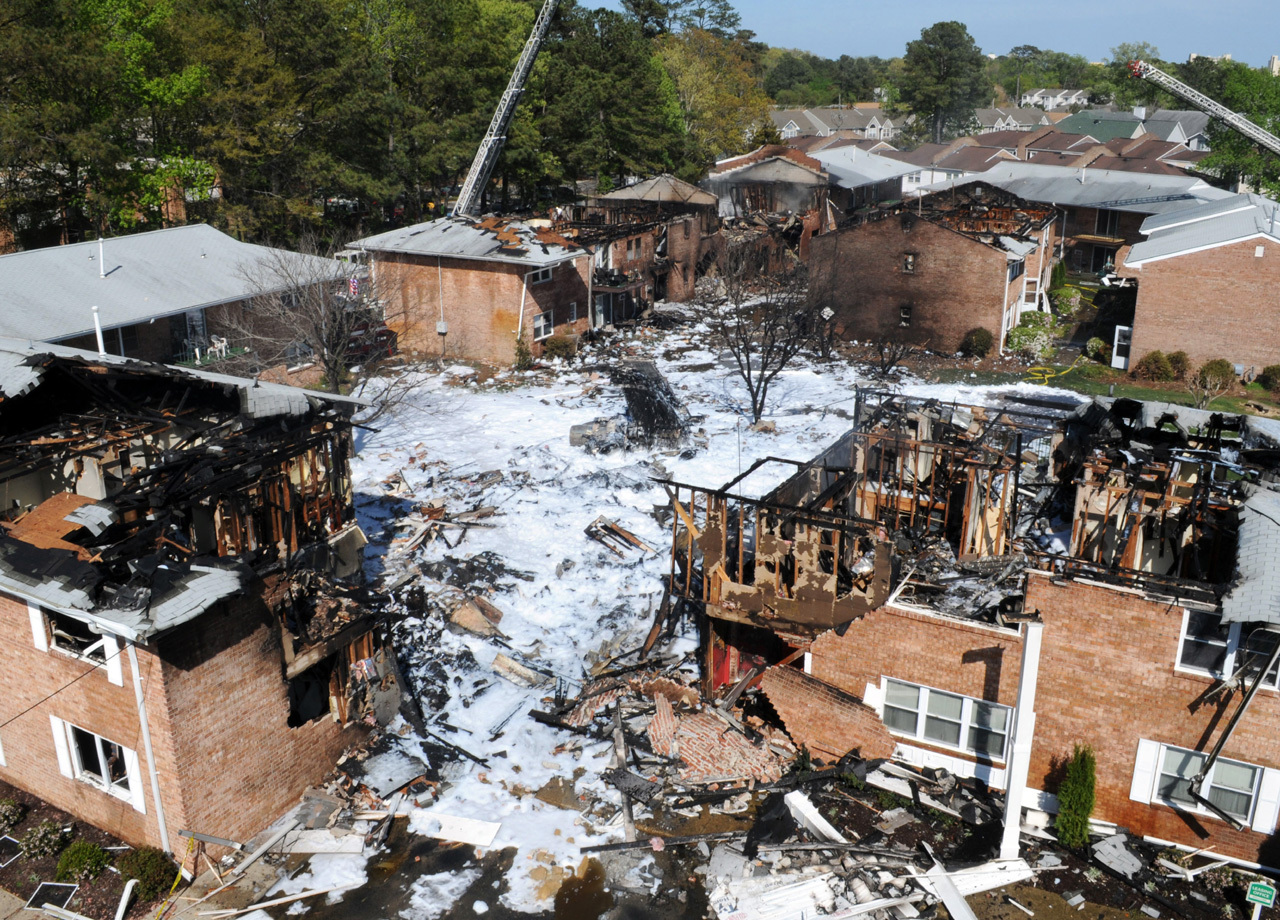 (CBS/AP) VIRGINIA BEACH, Va. - Zooming along at 170 mph in a fighter jet carrying thousands of pounds of volatile fuel, two Navy pilots faced nothing but bad choices when their aircraft malfunctioned over Virginia's most populated city.

"Catastrophic engine system failure right after takeoff, which is always the most critical phase of flying, leaves very, very few options," said aviation safety expert and decorated pilot J.F. Joseph. "You literally run out of altitude, air speed and ideas all at the same time," he said.

Somehow, however, the student pilot and his instructor and everyone on the ground survived Friday when the men ejected from their F/A-18D jet moments before it crashed in a fireball in an apartment complex courtyard. The pilots and five on the ground were hurt, but all had been released from the hospital.

Crews had carefully checked the apartments, and all residents had been accounted for early Saturday, fire department Capt. Tim Riley said Saturday. No deaths were reported.

That could change if, for instance, authorities did not know about a guest that had been staying in an apartment, Riley said.

Still, Navy Adm. John C. Harvey, commander of U.S. Fleet Forces, said Saturday during a news conference that he was surprised the crash had not claimed any lives and that he hoped to "keep this amazing miracle going."

CBS News Homeland Security correspondent Bob Orr reports the Navy has began its investigation to find out why the high performance fighter jet crashed just minutes after taking off from Oceana Naval Air Station, less than 10 miles away.

Military sources say the pilot in the front seat of the fighter was experienced but was training on the F/A-18. The other pilot, in the back seat, was a certified military trainer.

Capt. Mark Weisgerber with U.S. Fleet Forces Command said he did not know how many times the student pilot had been in the air, but the instructor was "extremely experienced."

Joseph said the airman being trained would have had 1 ½ years of intensive training before he taking flight from Oceana.

What it's like inside an F/A-18 jet on a training mission
Navy jet crashes into Virginia Beach apartments, pilots eject

Investigators will work from the outside of the site toward the center to gather parts from the jet and examine them, as well as check out the flight data recorders, Harvey said. The entire investigation could take weeks.

The pilots were able to safely escape the aircraft, which weighs up to 50,000 pounds fully fueled and armed, before it careened into the apartment complex, demolishing sections of some buildings and engulfing others in flames. Some 40 apartment units were damaged or destroyed.

The two-seat jet had dumped loads of fuel before crashing, though it wasn't clear if that was because of a malfunction or an intentional maneuver by the pilots, said Weisgerber.

Virginia Beach EMS division chief Bruce Nedelka said witnesses saw fuel being dumped from the jet before it went down, and that fuel was found on buildings and vehicles in the area.

The plane not having as much fuel on board "mitigated what could have been an absolute massive, massive fireball and fire," Nedelka said. "With all of that jet fuel dumped, it was much less than what it could have been."

While Joseph agreed the fuel loss could have been tied to the malfunction, he added, "I would say every action they took was an attempt to mitigate damage on the ground, up to and including the loss of life."

Remnants of the fighter jet's engines landed in the courtyard of the complex.

One of the pilots had to be freed from his ejector seat by neighborhood resident Nick Bean, who said, "He was bleeding a little bit and he still had his seat attached to him, so I pulled my knife out and cut him loose from his chair and dragged him out and got him as far away as I could."

Neighbors say one pilot's parachute snagged on a building near Pat Kavanaugh's back porch.

""He apologized very much for hitting our complex," Kavanaugh recalls, "and I told him, 'Don't worry about it, everything is going to be fine. Let's just get you outta here."

Chandler Blake Ferguson says he saw smoke and fuel pouring from the back of the plane.

Witnesses say it was obvious the pilots had little or no control.

"It just looked basically like he dropped out of the sky, pretty much," says Daniel Kavanaugh. "The front end of the plane started going down and then, boom - a huge black cloud of smoke."

"We heard the plane flying," one resident says, "and then, all of sudden, there was this terrible loud crash and everything shook."

On "CBS This Morning: Saturday," two people who saw the accident unfold described the scene to co-host Rebecca Jarvis. To see the interview, click on the video below: