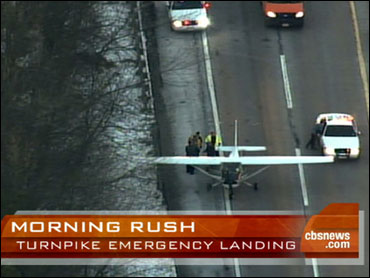 As a traffic pilot, Frank Vogt helps commuters plan their morning drive. But Monday morning, he became the traffic report when he was suddenly forced to land his plane in the middle of the New Jersey Turnpike.

The Cessna started losing oil and altitude, so Vogt set it down the only place he could.

He stopped by "The Early Show" to talk about the harrowing experience with Erica Hill.

How did he choose this particular spot on the highway?

"Well, at that particular time of morning it's still dark," Vogt told Hill. "It's pretty hard to pick out [a] landing field and stuff. And the highway was lit up and seemed pretty logically smart at the time."

Asked if he was concerned about landing while dodging cars on the road, Vogt said, "It's kind of funny, I lined up going with the traffic, and the volume wasn't that big. And I thought they'd probably see me, this weird aircraft coming landing. It worked out pretty good."

There was a traffic back up due to rubbernecking, but surprisingly, few people stopped to check on Vogt. "Once I actually landed, I didn't know what to do, so I pulled over to the right side of the road and people just started going by on the left side. No one stopped to help."

"Everybody's fine. That's got news. The plane is in the shop right now. Are you going to head back up, go back to work?" Hill asked.

"Well, not in that particular plane, but I'll definitely be flying again," Vogt vowed.

"Is it weird when you see that and you think 'That was me yesterday'?" Hill asked.

"Yes, absolutely," Vogt replied. "Just friends calling, it's like, you know, it's very surreal that I landed on a highway."