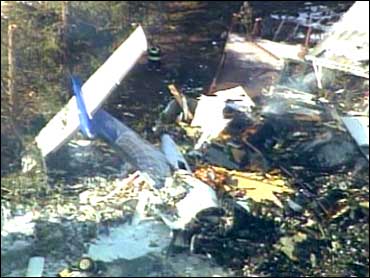 As investigators continue to gather clues into the deadly crash of Flight 3407, some experts say pilot experience may have been a factor.

Capt. Marvin D. Renslow finished training on a Dash 8 just two months ago, reports the Buffalo News. He had amassed 110 hours in the turboprop's cockpit, logging the bulk of his 3,379 total flight hours on the much smaller Saab twin-engine turboprop. First officer Rebecca Lynne Shaw had around 770 hours flying the Dash 8 and 2,244 total hours.

By comparison, Capt. Chesley Sullenberger, who successfully landed US Airways Flight 1549 in the Hudson River last month, had around 20,000 hours in the cockpit.

"There's a huge experience disparity. It should raise the eyebrows of a lot of people."

While Moss doesn't fault either of the pilots for the crash, he notes that regional commuter airline captains, who work long hours for modest pay, simply don't have the wealth of experience to draw upon when emergencies arise.

"In reading hundreds of accident reports, the more experience the pilot has, the more able he is to handle the unique situations of any emergency," Moss said.

"That is one advantage of flying a major airline: You have tremendously more experience. The bag of resources a crew has is much larger. In the Hudson, Capt. Sullenberger wasn't using procedures that are written somewhere. There's no training for what he did. It's all just experience."

The type of aircraft is also a likely factor, as most ice-related accidents in involve turboprop planes, reports CBS News correspondent Nancy Cordes from Washington.

Former Federal Aviation Administration chief investigator Steven Wallace says propeller planes, even large ones like the one that crashed near Buffalo, are far more susceptible to ice buildup than jets.

"Jetliners, one, they tend to climb up and down through the altitudes faster and icing only occurs in a 10 to 15 degree centigrade span," Wallace says. "And one difference with a big jet airliner, they typically have heated wings. They bleed air off the engines to heat the wings."

Turboprops, on the other hand, tend to have inflatable devices called boots mounted on the edges of the wings to knock ice off.

After two deadly turboprop crashes in 1994 and 1997, the FAA ordered flight crews to activate the boots at the first sign of ice accumulation, and prohibited propeller planes from functioning on autopilot in severe icing conditions.

But the NTSB, which investigates crashes, has long called for more stringent testing of turboprops and restrictions for flying in icy conditions.

"The pace of the FAA's activities ... remains unacceptably slow," according to an NTSB warning just four months ago.

National Transportation Safety Board member Steve Chealander said investigators already have collected about half the crash debris and want to finish by Wednesday, when a snowstorm is expected to hit the area and hamper the cleanup.

After a seemingly routine flight, the Dash 8 Q400 turboprop plane, operated by Colgan Air, endured a 26-second plunge before smashing into a house about six miles from Buffalo Niagara International Airport. The crash killed all 49 people on the plane and one on the ground.

Though ice has emerged as a possible contributor to the crash, Chealander has not ruled out other possibilities, including other aerodynamic or weight issues that could have made the aircraft uncontrollable.

The crash occurred so quickly and so violently - pitching and rolling the plane almost onto its back at one point and making it plunge 800 feet in just five seconds - that the pilot didn't have time to radio for help. So far, investigators have not found any mechanical problems with the aircraft, and they already have ruled out some causes of previous crashes, such as the loss of a propeller blade.

However, Chealander said investigators will research previous accidents and look for similarities.

On Monday, victims' relatives visited the crash site for the first time and placed red roses on a makeshift fence surrounding it and on the ground.

The site of the house on a quiet, tree-lined street in a middle-class neighborhood is now an almost empty dirt lot. All that is left are a garage with a scorched door, a basketball hoop, four steps leading to nowhere, a mailbox and the plane's enormous tail.

The two closest homes, each no more than two feet from the lot, appear almost untouched.

A tractor lifted the engine's burnt frame, pieces of dirt and charred metal hanging from it, from the lot Monday and put it aside to be investigated. Experts who helped identify victims from Flight 93's crash in a Pennsylvania field on Sept. 11, 2001, joined the search for remains.