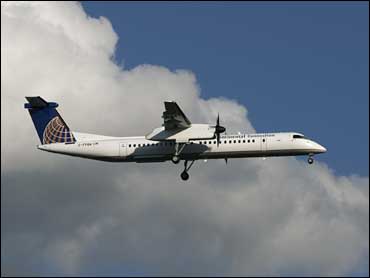 As the families of the victims prepare to identify the remains of their loved ones, crash investigators and air safety experts also have a difficult task ahead: determining how frozen water could have brought down a brand new plane with high tech deicing equipment.

Former Federal Aviation Administration chief investigator Steven Wallace says propeller planes, even large ones like the one that crashed near Buffalo, are far more susceptible to ice buildup than jets.

"Jetliners, one, they tend to climb up and down through the altitudes faster and icing only occurs in a 10 to 15 degree centigrade span," Wallace says. "And one difference with a big jet airliner, they typically have heated wings. They bleed air off the engines to heat the wings."

Turboprops, on the other hand, tend to have inflatable devices called boots mounted on the edges of the wings to knock ice off.

After two deadly turboprop crashes in 1994 and 1997, the FAA ordered flight crews to activate the boots at the first sign of ice accumulation, and prohibited propeller planes from functioning on autopilot in severe icing conditions.

But the NTSB, which investigates crashes, has long called for more stringent testing of turboprops and restrictions for flying in icy conditions.

"The pace of the FAA's activities... remains unacceptably slow," according to an NTSB warning just four months ago.

Last October, the NTSB renewed its criticism of the FAA over its snail-paced revisions of its recommended deicing procedures. In a blistering release it accused the FAA of complacency: "The FAA has stated that no unsafe conditions exist that warrant actions beyond those that have already been completed or are in the process of being completed. The Board is concerned that the FAA has reached this conclusion based on a lack of accidents or serious incidents. During the 1990s, a number of accidents occurred involving airplanes that had passed the certification standards and for which the FAA believed there was no unsafe condition requiring action. Before another accident or serious incident occurs, the FAA should evaluate all existing turbo propeller-driven airplanes in service using the new information available, such as critical ice shapes and stall warning margins in icing conditions."In general, smaller planes like the Dash 8, which uses a system of pneumatic de-icing boots, are more susceptible to ice buildup than larger commuter planes that use a heating system to warm the wings. The boots, a rubber membrane stretched over the surface, are filled with compressed air to crack any ice that builds up.

Still, what stumps the experts is that the plane that crashed on Thursday just rolled off the assembly line last year, and was outfitted with state of the art deicing equipment.

"This variant of the (plane) is a very advanced turboprop," says former NTSB Managing Director Peter Goelz. "It's got the latest bells and whistles, it's very popular among the regional carriers because it does a great job, it flies fast and it flies economically.

Because it flies so fast, Cordes reports, pilots tells us that once the crew lost control at 2,300-feet it probably took 15 seconds - or less - for the plane to plunge to the ground.

Every time ice brings down a plane, the volume rises on how best to protect aircraft from the all-too-common and all-too-disastrous phenomenon. And each time, the conversation fades before significant changes are made.

(CBS)
Authorities caution that they're still investigating why Continental Connection Flight 3407 dropped out of the sky onto a house Thursday night, killing 50 people. But recordings show the crew was concerned about ice buildup on the windshield and wings shortly before the crash.

With planes carefully designed for aerodynamics, a buildup of ice can affect their lift and handling. A crash blamed on ice killed 68 people in 1994 in Indiana, another killed 29 people in 1997 in Detroit.

Investigators know the plane's deicing system was turned on but can't yet be sure it was working - or whether it was activated, or when.

Planes are deiced before takeoff to remove any ice that collects beforehand. Sometimes, they must be deiced in the air as they descend and encounter the necessary mix of temperature and precipitation for ice to form.

If a midair deicing system isn't working, guidelines from the Aircraft Owners and Pilots Association Air Safety Foundation say pilots can take a number of steps, including changing speed, pulling the nose up or down, or trying a 180-degree turn to rid the plane of ice.

It's not known what steps the pilot in Thursday's crash might have taken if he was experiencing ice buildup. But the plane had been approaching the airport, and investigators said Saturday that it apparently was pointing in the opposite direction when it crashed.

Pilots of turboprop planes must turn on their deicing equipment when they notice buildup. The NTSB wants to go a step further and require them to turn the equipment on when conditions are right for icing.

Then there's talk of an automated ice-detection system like those used in jetliners - but some automated systems can cost upward of $500,000, according to The Wall Street Journal.

The plane that crashed was equipped with rubber bladders that can be inflated by the pilot to crack ice on the nose, wings and tail; the wind then sweeps away the cracked ice.

Many procedures and devices can help ensure icing is not dangerous, and pilots need to keep up on the latest developments, NTSB Vice Chairman Steve Chealander said.

"You can design everything in the world, but if the human being doesn't use all those things constantly and focus on them constantly, then you can have tragic consequences," he said.

"I'm not trying to draw any conclusions about this accident, I'm just saying in general, we can never let up our focus on all these types of things," he added.

Once activated on the newer model that the Buffalo pilot flew, the bladders inflate and deflate every 24 seconds automatically, a system that Chealander called "very sophisticated" at a Saturday briefing.

Not mentioning the Federal Aviation Administration by name, Chealander said the NTSB's recommendations to stiffen rules on deicing have gone unheeded for years.

FAA spokeswoman Laura Brown said her agency has not ignored the NTSB recommendations and has issued more than 100 airworthiness directives since 1994 that address icing.

"Their concern is this is not happening quickly enough," Brown said. "As with any safety improvement that is significant, we have to go through rulemaking to get there. It takes time."

In 2007, the FAA proposed requiring better ways to detect ice buildup or let pilots know about conditions that could cause ice buildup - in future airplane designs.

It also proposed methods that could help automatically detect ice or potentially icy weather and cue the pilot to turn on deicers. The rule is in the final stages of executive review.

In big jets, crews use heat from the engines to warm the wings and prevent ice buildup. But smaller commuter planes like the 74-seater that crashed Thursday had no such option.

"The big planes are using it off their jet engines," said Justin T. Green, an aviation attorney in New York who has represented the families of victims of air disasters.

The threat of icing looms so commonly that Robert Benzon, the chief investigator of the January splashdown in the Hudson River of a US Airways jetliner, described it as a cyclical menace during an interview last month.

"You do a rash of wing icing accidents," he said. "We rattle our sword. The industry gets its act together and then as time passes, things start to slip and 10 years down the road you get another rash of this type of accident. It's a difficult thing to overcome."