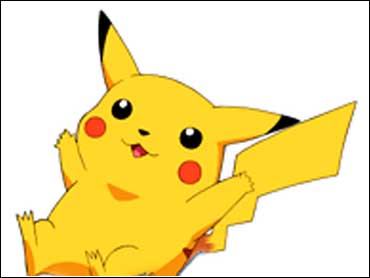 A new form of the street drug ecstasy is making the rounds. And what has officials particularly worried is that it's being marketed under a most innocent guise: the pills are engraved with a popular children's Pokemon cartoon character.

Police say pills laced with the hallucinogen PCP and stamped with the "Pikachu" cartoon character have been confiscated in Fairfax County, Virginia.

In some cases, the Pikachu pills contain ecstasy and PCP, also known as angel dust or phencyclidine. In other cases, they contain PCP only. Police say it's the first time they've seen those drugs combined, and it has officials concerned.

"People who think they're taking ecstasy and get a full dose of PCP instead ... they're going to get a much different reaction," said Glenn Druckenbrod, medical director of emergency medicine at Inova Fairfax Hospital.

While ecstasy users often end up in the emergency room - blood pressure, heart rate and body temperature all increase dramatically with ecstasy use - Druckenbrod said PCP use can produce violent and dangerous reactions.

"PCP produces such a violent reaction. I remember the days when PCP use was common. You'd need four or five people to hold that person down," he said.

PCP use has been in decline recently, and so far, there have been no PCP cases showing up in the emergency room, but Druckenbrod worries that the "Pikachu" pills could spark a revival in the use of the drug.

"I would hate to think that drug dealers are marketing to the Pokemon age group," he said. "But it's created an awareness. ... It's a marketing gimmick."

Authorities believe that the pills are being sold on the streets of Washington, D.C. with the target buyers ranging in age from mid-teens to mid-twenties.

Ecstasy manufacturers often mark their pills with a "brand name." Shamrocks, smiley faces and the Nike swoosh logos have all been found stamped on the pills.

"They'll sell the tablet, and users will come back and ask for the 'Pikachu pill,'" said police Detective Ken Larson.

Fairfax County Police first came across the orange and white pills in a drug bust in December. Initially they thought they had contained standard ecstasy, but subsequent lab tests revealed the PCP.

Ecstasy, also known as MDMA, is a stimulant that can at times produce mild hallucinogenic effects and it's difficult to predict how the drug will interact with PCP. Druckenbrod said it's possible that the two drugs could cancel out each other's effects.

"But no one knows for certain what would happen. And you don't know if you're getting half-and-half, or all PCP," he said. "The people who are making and selling this stuff certainly don't care about (a user's) well-being."