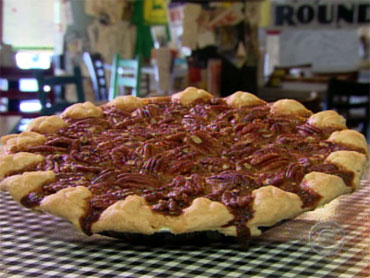 Putting a delicious pie on your table on a regular basis can be as easy as pie, or so our Bill Geist has discovered:


Down in Round Top, Texas, there's a small café with a big idea - a cure for pie anxiety.

Friends, do you toss and turn at night worrying where your next pie is coming from?

You'll receive the same pie that Bud "The Pie Man" Royer serves to flocks of fanciers making the pilgrimage to his pie palace.

He described his roster of pies:

The pie enthusiasts at Royer's Café wolf down lunch, eager to order dessert.

"The chocolate chip is our best seller," the waitress says. "The apple is by far my favorite. The key lime buttermilk is amazing."

One fellow at the counter said only chocolate chip pie for him: "I only eat the tollhouse, that's all I eat."

Suddenly comes an onslaught of pie!

"Oh my God!" comes cries to pie heaven. Served up are apple, pecan, pumpkin and buttermilk.

And don't forget to order a la mode. Bud applies a 50 cent surcharge if you don't have ice cream on your pie.

"You have to have ice cream on pie," he explained. "It's just wrong if you don't!"

We watched customers delight in butterscotch and tollhouse. They come not just to eat pie but to praise it.

"The pie is magnificent!" one woman said.

"The key lime buttermilk is amazing."

Geist asked one woman what she was thinking as she ate her pie: "I'm thinking heaven and I'm thinking I love Bud," for which the Pie Man delivers . . . a kiss. .

This all started in 1987 with Bud using Grandma's recipe to make a couple of pies a week.

"Not my grandma," he admitted. "It is an old family recipe, just not my family!"

How many pies does he sell now?

"During the week, we'll see a couple hundred pies just out the door here," he said.

How can one man bake that many pies? He Can't. Most are made in Houston these days (using Bud's recipes, of course).

He hopes to sell thousands more with his "Pie for Life" program - an annuity plan that guarantees pie in perpetuity.

And how much must that much pie cost?

The price varies according to the customer's life expectancy as determined by actuarial tables and pie charts. (Ahem.) But no one has figured the effect on life span of eating all those pies.

After some numbers-crunching, Bud gives me the news: "Well, rest of your life, once a month, one time check, one time fee: $6,869."

That's quite an investment in pie, but you can't really put a price on peace of mind … or for that matter, a piece of pie.

But what happens if he goes out of business? Is there pie insurance?

Nobody's signed up yet, but Bud is certain they will. As one customer explained, "When you figure what he charges for a pie, it's not a bad deal, especially if you live to 80 or 90 years old. Not a bad deal. It's only money. Can't take it with you!"

Bud is betting I'll only last another 180 pies. It's a sobering thought, realizing that each of us has a finite number of pies left . . . so, enjoy every bite.