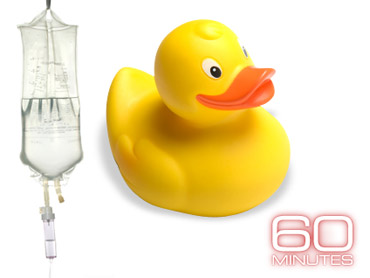 More than ever, people are worried about how all the chemicals we're exposed to are affecting our health: among them a family of chemicals known as phthalates, which are used in everyday plastics.

Not plastic bottles of water or soda, but soft and flexible things like shower curtains. They're also in shampoos and carpeting.

Phthalates are so ubiquitous, we all have traces in our bodies.

Recently the Environmental Protection Agency, EPA, put phthalates on a list of chemicals that "may present a risk" to the environment or human health. That's because they disrupt hormone activity and some preliminary studies show that they may be causing a slow and steady demasculinizing of men.

But if phthalates were on trial, a jury might find the evidence against them conflicting and inconclusive. And yet last year Congress took action, doing what Europe had already done: it banned certain phthalates in children's toys.

Congress came under pressure to act because of a study by Dr. Shanna Swan, an epidemiologist at the University of Rochester Medical School. Dr. Swan compared the levels of phthalates in a group of pregnant women with the health of the baby boys they gave birth to.

Swan told "60 Minutes" correspondent Lesley Stahl she found that the higher the level of phthalates in the mother's urine during pregnancy, the greater the problems occurred in young boys.

Asked what she found in babies, Swan said, "We found that the baby boys were in several subtle ways less completely masculine."

Dr. Snyder operated on one-year-old Griffin to correct something called "hypospadias," a birth defect that causes problems in urination.

"He's a healthy little guy who's, I think, going to get through the rest of life aiming without any difficulty at all," Snyder told Stahl.

"Thirty, 40 years ago, the best data we had then was that hypospadias occurred in about one in every 300 live male births. It's up to now about one in 100. So there's been a threefold increase," Snyder explained.

There's also been a two-fold increase in another abnormality: un-descended testicles. Snyder says something seems to be interfering in the womb with the production of testosterone, causing the male organs to form improperly. And he suspects it may be phthalates.

"You're moving in on these chemicals," Stahl remarked. "You don't think whatever we're seeing is smoking or diet or something else?"

"I think it's the chemical exposure that are most telling," Snyder replied.

He points to studies beyond Shanna Swan's that seem to link phthalates to low sperm counts and low testosterone levels in adult males.

"There's just too much incremental data that has built up to be ignored. I think it's a real phenomenon. I really, honestly do," Snyder said.

Look around Dr. Snyder's hospital and you see how phthalates can make their way into our bodies. They're in the IV bags and the tubing for instance. When premature babies - hooked up like this - were studied, researchers found that their phthalate levels soared.

Who would've thought chemicals embedded in plastic leach out. Well they do, in small amounts. But studies are beginning to suggest that even small amounts can have an effect. If it is shown definitively that phthalates are dangerous, it won't be easy to get rid of them.

It turns out they're also in things like car dashboards, steering wheels, gearshifts and even that "new car" smell.

Phthalates make fragrances linger longer - whether in cars, or in air fresheners.

Phthalates get inside us in a variety of ways, for instance, from products we put on our skin: they help lotions spread and women's make-up retain its color.

Swan says cosmetics alone could explain why women have higher levels of phthalates than men.

If you want to know if something you're using has phthalates, it's hard to find out: there's no requirement they be listed on labels. There are so many products with phthalates in the average home, Dr. Swan says they leak out in measurable amounts.

"We've measured indoor air and it does contain phthalates, as does the dust in your vacuum cleaner bag." And, Swan says, we're breathing it.

We also eat phthalates which have been found in meat. In fact, food could be our biggest source of them: milk, possibly from the plastic tubing at dairy farms. And according to government regulators, they're in tap water, tainted by industrial waste.

But before you start throwing out everything in your house, listen to Cal Dooley, president of the American Chemistry Council, an industry lobbying group.

Asked if phthalates are safe, Dooley told Stahl, "We believe they are absolutely safe. And if you look at every regulatory agency that evaluated the safety of phthalates, they have all determined that they are, in fact, safe for their intended use, the way they're being used in consumer products today."

But then came the headlines that read like a parent's worst nightmare: "Chemicals Feminizing Males" and "More Birth Defects Seen in Boys." Congress reacted, passing that law on phthalates in toys.

"We threw away perfectly good merchandise," he told Stahl.

He's had to throw away 3,000 toys and he has remade the rubber duckies and plastic ice cream without the offending phthalates. But what about a child's telescope in his inventory?

"It doesn't have phthalates in it," Woldenberg said. "Or, if it does, it would be on a small part on the inside. No one's gonna eat the telescope."

And yet under the law he's obliged to spend tens of thousands of dollars to test every single product in his inventory for the phthalates. Testing the telescope alone will cost him $8,600.

"So, even if it's not pliable, even if you just know intuitively that phthalates are not in this thing, you still have to have it tested?" Stahl asked.
"Not only that, we have to test even the components that are inside the toy. Even the stuff that no human will ever see," he replied.

Woldenberg says the law is good intentions run amok, and he points out that Congress overruled the findings of the CPSC, the Consumer Product Safety Commission, and the Food and Drug Administration, which say the levels we're exposed to every day are safe.

The CPSC, which studied phthalates in toys twice, even had volunteers chew on them to see if phthalates oozed out. So why all the alarm bells? It all started with experiments on rats.

Dr. Richard Sharpe in Edinburgh Scotland, one of the leading phthalate researchers in the world, exposed pregnant rats to phthalates and produced a string of abnormalities in their male offspring.

"So by giving pregnant rats phthalates you're inducing some of the same problems that human males are having and that you're seeing?" she asked.

There have been hundreds of studies on rats with similar findings.

But when Sharpe tried the same experiment on animals much closer to humans than rats - monkeys - he got an entirely different response. He tested phthalates on pregnant marmoset monkeys. And their offspring? Completely normal.

According to Sharpe, the monkeys had none of the effects found in humans or rats.

"If someone were to tell me there was a rat study that showed one thing, and monkey study that showed another thing, as a human, I would think that I'm closer to the monkey. I would lean toward that study, right?" Stahl remarked.

"Yeah. I would say take the species that's closest to man, and place more emphasis on that," Sharpe said.

So here's where we stand: a rat study on one hand, contradicted by a monkey study on the other. Then there's a string of new human studies that link phthalates to problems with masculinity, but each one of them is described as "small and preliminary." Even Dr. Swan, whose study led to Congress banning the phthalates in toys, speaks with uncertainty.

Asked if she's convinced phthalates are harmful to humans," Swan told Stahl, "I'm convinced that they pose a substantial possibility of harm. I cannot conclude they are harmful without confirmation of my study and additional data."

She says she needs more data to be sure, and yet she supports the congressional action on toys.

"The Consumer Product Safety Commission said that these toys have minimal to non-existent risk for these children," Stahl remarked.

"I don't think we have the data to conclude that," Swan replied.

"But they're saying you don't have the data to say the other thing, either: that they're harmful," Stahl pointed out.

Asked if the CPSC knows everything she does regarding the research, Swan replied, "I assume so."

"So, how can you look at the same data and come out with such different conclusions?" Stahl asked.

"I think that the interpretation of data is difficult and changing. And at each point in time we have to decide 'What is the action we as a society want to take. Do we want to be more cautious? Do we want to be less cautious?'" Swan said.

Some manufacturers have chosen "more cautious." Cosmetics maker Avon, Johnson & Johnson and S.C. Johnson - on their own initiative - are taking all phthalates out of their products.

What would he call it?

"Well, there are some consumers out there that have some concerns about our products. And we respect that," Dooley replied.

"I guess what I'm asking is, is the word 'phthalate,' does it have such a stigma that companies are going to demand you find alternatives 'cause they're too afraid the people won't buy their products?" Stahl asked.

"No, we're not concerned about that," Dooley replied. "We understand that consumers really value the products that contain phthalates; the market is still strong there. We're going to continue to produce 'em."

So while scientists and the EPA search for a definitive answer on whether phthalates are harmful or not, the question for the rest of us is: should we take precautions now?

"If I said to you, 'Are phthalates harmful to humans?' what would you say?" Stahl asked Dr. Sharpe.

But he has advised women to take precautions.

Sharpe said, "Well, I think that the public understandably get a bit fed up with people, like myself or other people saying, 'Well, look, you know, these chemicals might cause effects. But, on the other hand, they might not.' And they say, 'Well, look, what can I do for my baby in case they do?'"

"So don't use body creams. Don't go out and spray insecticide in your garden. Don't even do painting in the house. Get your husband to do it," he added.

"Phthalates are in all those things?" Stahl asked.

"I'm not saying it's phthalates," he replied. "I'm saying that what you want to do is avoid environmental chemicals in total as much as you can."

Can A Video Game Lead To Murder?