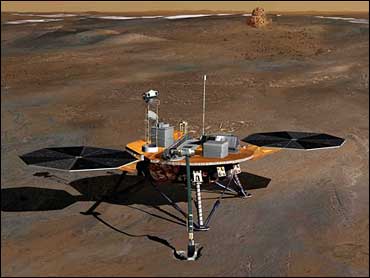 NASA's newest outpost in the solar system is a polygon-cracked terrain in Mars' northern polar region believed to hold a reservoir of ice beneath.

Hours after the Phoenix Mars Lander softly landed Sunday in the Martian arctic plains, it dazzled scientists with the first-ever glimpse of the Red Planet's high northern latitudes.

A flood of images sent back by Phoenix revealed a landscape similar to what can be found in Earth's permafrost regions - geometric patterns in the soil likely related to the freezing and thawing of ground ice.

"This is a scientist's dream, right here on this landing site," principal investigator Peter Smith, of the University of Arizona, Tucson, said in a post-landing news conference.

Phoenix landed on Mars after a 10-month, 422 million-mile journey. After a week checking out its science instruments, the lander will begin a 90-day digging mission to study whether the northern polar region possesses the raw ingredients needed for life to emerge.

"Life as we know it requires water and it requires organic compounds - the chemicals that make our cells work," says CBS News space consultant Bill Harwood. "Where the Phoenix is, they're pretty sure there's ice there under the surface. There may be organic compounds and if there are, then you really have an environment that could support life - either in the past or even in the present day."

Phoenix joins the twin rovers on the Martian surface, which have been exploring the equatorial plains since 2004. Unlike the mobile rovers, Phoenix was designed to stay in one spot and dig trenches in the soil.

The images confirm the lander unfurled its solar panels, hoisted its weather mast and unwrapped the protective covering of its 8-foot-long robotic arm. It will be several days before the arm will be unstowed.

"Everything just worked like a charm," said Goldstein, who kept up a Jet Propulsion Laboratory tradition by passing out bags of lucky peanuts on landing day.

Mission control erupted in cheers when a radio signal from Phoenix was detected after a hair-raising plunge through the atmosphere that required the lander to slow itself down from more than 12,000 mph to a 5 mph touchdown using a combination of friction, parachute and thrusters.

Mission managers pumped their fists and hugged one another after the confirmation signal was received.

"They will be remembered forever that they are the first people to explore the polar region of Mars. There's no telling what discoveries would be seen over the next 90 days," Jet Propulsion Laboratory director Charles Elachi said.

It was the first successful soft landing on Mars since the twin Viking landers touched down in 1976. Rovers Spirit and Opportunity used a combination of parachutes and cushioned air bags to bounce to the surface four years ago.

Phoenix avoided the fate of another polar explorer, the Mars Polar Lander, which crashed into the Martian south pole after prematurely shutting off its engines in 1999. Phoenix inherited the hardware of a lander that was canceled after the Polar Lander disaster and carried similar instruments flown on the ill-fated 1999 mission.

Phoenix's descent was nearly flawless. The only unexpected turn occurred when it opened its parachute seven seconds later than planned, causing the spacecraft to settle slightly downrange from the bull's-eye target, said Ed Sedivy, program manager at Lockheed Martin Corp., which built the spacecraft.

Phoenix planted its three legs in a broad, shallow valley littered with pebble-size rocks that should not pose any hazard to the spacecraft, project managers said.

During its prime mission, Phoenix will dig through layers of soil to reach the ice, believed to be buried inches to a foot deep.

It will study whether the ice melted during a time in Mars' recent past and will analyze soil samples for traces of organic compounds, which would be a possible indicator of conditions favorable for primitive life. Phoenix is not equipped to detect past or present alien life.

The $420 million Phoenix mission is led by University of Arizona and managed by the Jet Propulsion Laboratory.


For more information visit NASA's Phoenix mission Web site, and the mission pages at the University of Arizona.