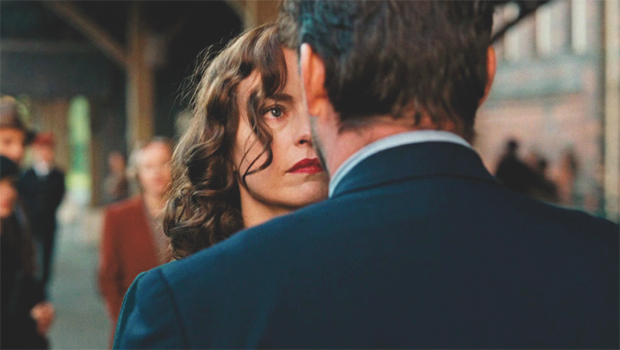 Nelly survived the Second World War, barely. Liberated from Auschwitz and horribly disfigured, she undergoes cosmetic surgery as a kind of rebirth, in a nation reeling from defeat. She dreams of returning to the life she knew before the war, which is all but impossible -- most of her friends and family were killed; her husband, Johnny, has gone missing.

Nelly's search for Johnny takes her to a nightclub in a bombed-out Berlin, where the man -- believing his wife dead -- doesn't even recognize her. But what he sees in the woman is an opportunity to defraud his dead wife's estate, by getting her to pretend to be Nelly, and with him split Nelly's inheritance.

Set in a Germany that is partitioned and in ruins, director Christian Petzold's new film, "Phoenix," is a hypnotic take on classic film noirs of the 1940s and '50s -- mysteries of crime and passion in which wounded souls come alive and where death is ever-present. With magnetic performances by Nina Hoss and Ronald Zehrfeld (who both starred in Petzold's masterful 2012 drama, "Barbara"), "Phoenix" perhaps most vividly recalls Alfred Hitchcock's tragedy, "Vertigo," in which James Stewart tries to reinvent Kim Novak as his dead love.

"We have someone whose body and identity is totally destroyed, but her soul wants to have her body and senses back," Petzold told CBS News. "And there's a man whose soul is totally walled in, [while] his body is living on. Sometimes in the movie his body recognizes her -- he looks into her eyes, he gives her a kiss, he smells her body -- but the channels to the brain are destroyed, he has no senses any more." It is, he says, the tragedy of a couple trying to "reconstruct something which is totally destroyed."

The story also captures the haunted lives of those who had fled Germany before the war (to London, Switzerland or America) and returned in 1945 to face a much different nation than what they'd left.

"They were feeling guilty, because they were not 'survivors'; they had rescued themselves," said Petzold. "Also, they had the wish to come back after the war into a country which was a little bit like the country they had left. [But] they came back to a totally destroyed country."

The film's setting is definitely of a piece with the darkly-tinged movies that expatriate filmmakers like Billy Wilder, Robert Siodmak, Fritz Lang and Edgar Ulmer created in Hollywood after fleeing the Nazis themselves. "They made hard movies," Petzold said. "I said to the cameraman, 'We need that light.' Because it's the light of totally disappointed and nihilistic people who tried to come back to something that was life."

Petzold said that deadness was a difficult mood for some of his cast ["German actors don't like to play dead!"], so he used as inspiration the performances of Robert Mitchum in "Out of the Past," and Burt Lancaster in "The Killers," who embodied "extraordinarily tired men who don't believe in anything, they just live through the days."

Hoss' beautiful performance is emotionally wrenching, as she gets into the skin of a woman reborn, in a way, yet desperate to return to her past life. Then, a tragic twist forces Nelly to wake up to her situation.

"That is where for me Nelly can't pretend any more that she could ever be the same again," Hoss said. "You can't just say, 'No matter what he did, I can forget it, let us have our life back and let them not win and let love survive,' which are all these things that are so human and understandable."

One of the most moving scenes of recent cinema is when the tortured psyche of the survivors of the Nazi regime is laid bare by the number tattooed on a former concentration camp inmate's arm -- a moment, Hoss says, when "you can't deny what humans are able to do to others."

Exploring the humanity of the characters and the dehumanizing struggle they'd undergone is a fascinating journey for Hoss. "There is this weirdness about this job, putting yourself into this emotional space or into these situations with your imagination, that in a weird way is deeply fulfilling," she said. "Day after day, this character comes together. Although of course the whole period of time being with Nelly was very exhausting, as an actress you love those kinds of characters, where you can explore and understand so much about humans.

"This is the fascinating thing about acting, that I can live so many lives and get an idea of certain things and [what] experiences do to you and why people are the way they are and why you can't change them, and why it's sometimes not easy for people to open up and just tell you a story. In that sense I've really, really in a weird way enjoyed working on Nelly."

"Phoenix" is the sixth film on which Hoss and Petzold have collaborated. "With all the movies I made with Nina, I don't know why, I've always had the feeling that she's in exile," Petzold said. "It depends not so much from my script, it has something to do with herself. She's going through our world a little bit like she's not part of this world. Not a ghost -- ghost is the wrong word. She's like a little bit on the outskirts. We are good friends, but when the camera stars and she's moving, I'm always totally surprised by what she's doing there. She's not part of my imagination, she's really a stranger."

And while the director has been working on the story for many years, Hoss believes it came at the right time in her life for her, "where I was stable enough to be with Nelly for three months!"

"Phoenix," distributed by Sundance Selects, is now playing in New York City, and opens on Friday in Los Angeles, and in other cities in August. In German with English subtitles. Rated PG-13.