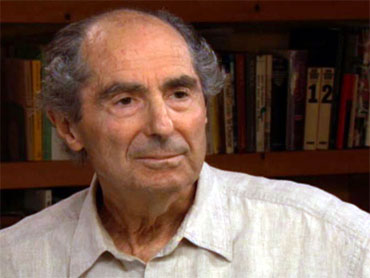 Some believe American novelist Philip Roth could win the Nobel Prize for Literature when it's announced this coming Thursday. Rita Braver caught up with the author in his old hometown:

If it's true you can't go home again, don't tell that to Philip Roth.

The legendary writer's childhood house in Newark, New Jersey, still stands - with a plaque in his honor.

"It's amusing," he admitted.

"Yeah, I wanted to be a famous baseball player!" he laughed.

Instead, he had to settle for "America's greatest living novelist," as he's been called many times.

And one of his greatest subjects is the town where he grew up. In his latest book, "Nemesis," he imagines a polio epidemic in 1940s Newark.

"It was, I think, the single-greatest menace," Roth said. "The cause was unknown. There was no treatment. So, it was pretty terrifying."

"By my count, this is around your 30th novel, 'Nemesis'?" Braver asked.

"A lot of writers take ten years to turn out one book," Braver said. "How do you write so quickly, so prolifically, and so well?"

His real secret may be solitude. Roth, now 77, has few distractions from his work on the sprawling rural Connecticut property where he lives alone.

He says it does get lonely sometimes.

"So, what do you do then? Just go back in the city?" asked Braver.

He may get over it, but many of his characters - like those in his latest book - are not so lucky.

"Do you not believe in 'happily ever after'?" Braver asked.

"No, I don't believe in that phrase," Roth said. "I'm interested in people when they're not happy."

His first book, "Goodbye, Columbus," about the guy who doesn't get the girl, grabbed the National Book Award.

Remember: This was some 40 years ago!

"There aren't a lot of writers who write with as much candor and humor about sex [as you]," raver said. "Why has that been such a recurring topic for you?"

Roth says, just before the book was published, he took his Mom and Dad out to lunch to prepare them for all the controversy that he confidently predicted would soon swirl around them and their son, the writer.

Roth recounts that years later, his father told him: "'You know what happened when we got in the taxi cab?' 'What,' I said. He said, 'Your mother began to cry. And she said, 'He has delusions of grandeur!'"

Roth insists his parents were NOT the models for Portnoy's unlikable Mom and dad. His loving mother, a homemaker, and his father, a successful insurance salesman, raised two sons.

Braver asked Roth what he was like as a kid: "Oh, adorable!" he laughed.

"When did you start wanting to be a writer?"

"I think in college," Roth said. "I began to write very bad, very sensitive stories. And I wrote those through college."

His writing has evolved, but one central theme remains constant:

"You are a secular writer, but religion or people of the Jewish faith just seem to be characters in your books," Braver said. "Why is that?"

"Do you consider yourself a religious person?"

"No, I don't have a religious bone in my body," Roth said.

"So, do you feel like there's a God out there?" Braver asked.

"You know that telling the whole world that you don't believe in God is going to, you know, have people say, 'Oh my goodness, you know, that's a terrible thing for him to say," Braver said.

Roth replied, "When the whole world doesn't believe in God, it'll be a great place."

Blunt talk from a guy who himself has been bluntly assessed by his ex-wife, British actress Claire Bloom, who described Roth as "a hostile man" in a scalding memoir after their 1995 divorce.

"Your former wife, Clara Bloom, claimed that you don't even like women," Braver said.

"You don't want to talk about her?"

"That was a bad episode in your life?"

Even during rocky personal times, Philip Roth has kept writing, at the surprising pace, he told us, of only one page a day. But they've been good pages.

In the 1990s, four of his novels won major American writing awards, including the Pulitzer Prize for "American Pastoral."

"That must have impressed even you?" Braver asked.

"No, it felt good. It's good. It's nice to win prizes, yeah. The child in one is very excited."

Yet, though he says he will never stop writing, the chronicler of Newark insists he's unconcerned about how he'll be remembered.

"What would you hope that your legacy would be, with all of these books that you've written over these many years?"

"Oh, gosh! When does the legacy begin?" Roth said.

"I think when you're gone. Way down the line."