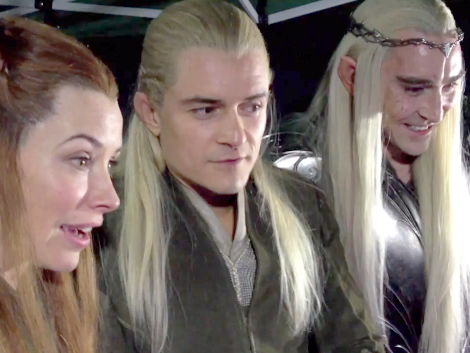 (CBS News) Turns out elves just wanna have fun.... and so does Peter Jackson, who has played a prank on some of his biggest "Hobbit" fans, with a video of the three main elves from "The Hobbit: The Desolation of Smaug" (Orlando Bloom, Lee Pace, and Evangeline Lilly in full elven gear and makeup) watching a video of two very zealous young girls reacting to the recently-released teaser for their film. Check out all of the shenanigans that unfold in the very playful video above.

It's not just the girls squirming and screaming with excitement that makes this clip so hilarious (though that would be fun in itself), but seeing how happy these stars are watching them watch them is totally meta (does that make sense?) -- they seem genuinely into it, and pumped to see their fans so psyched. And in under two and a half minutes we get more of a feeling for these actors, than any pre-taped TV interview could ever give us. At one point one of the girls exclaims that she may pee from excitement -- to which Lily can be heard sarcastically muttering, "Please don't." It may be my favorite moment.

Plus, just imagine what these girls did when they discovered that they were being watched by their favorite elves? I'm thinking a sedative might have been in order after that tidbit came to light. To check out the trailer for the film that has these uber fans peeing in their pants with glee, be sure to click here. (The film comes out Dec. 13, and you can bet these girls will be at the first showing.)

Oh, and "hi," it's nice to meet you. I'm Lesley, and I'll be contributing to The Feed from now on. I hope we can all have some laughs together at the Internet's expense.

UPDATE: The fans being reacted to by the stars in the video above have let us know in the Comment section below that they have created their own reaction to the reaction video which we are now including. (Yes, it's all become very complex and "meta" now.) Thanks for letting us know!