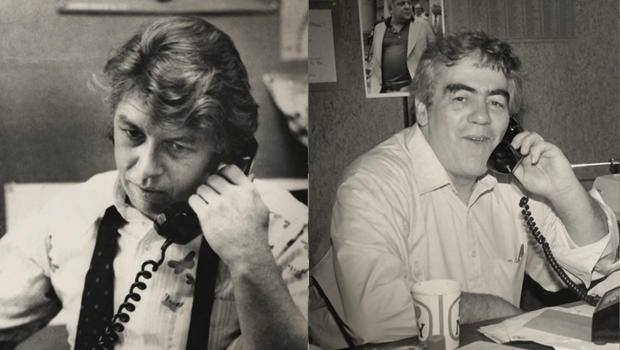 There was a time when every great American city had a great American newspaper. "City Room was the room where all the reporters had a desk," said Pete Hamill, who's worked for decades in city rooms around Manhattan. "They'd all be in there, working on big, standard Royal or Remington typewriters. And you would hear this great metallic roar: Ba-ba-top-bop-bop-Boom! Deadline! And laughter. A few curses!"

His career included stops at the old New York Herald Tribune, the New York Post, and the New York Daily News, which used to be America's largest-circulation newspaper. Used to be.

In fact, some 1,800 metropolitan and community newspapers have gone out of business or merged since 2004, pushing thousands of reporters out of a job.

But the city room roars again in the HBO documentary "Breslin and Hamill: Deadline Artists," about two "princes of print" in an era when newspapers were still king.

Filmmaker Spike Lee remarked, "Back in the day, I mean, you would buy the paper to see what Jimmy Breslin's saying. You know, what Pete Hamill [says]. I mean, those guys were like superstars."

Jimmy Breslin, who died in 2017, and Hamill, now 84, grew up Irish-American, more familiar with the corner bar than a college campus.

In "Deadline Artists," when asked if he defined himself as a journalist, Breslin replied, "Reporter. Not a 'journalist.' I don't know what those words mean. That's a college word. I just go out and report, chase news. And in the chasing, you always run into something."

Pete Hamill had a different approach. According to journalist Mike Barnicle, "Hamill was, I always thought, like a poet. He gave you the poetry of New York."

"Once there was another city here, and now it is gone. There are almost no traces of it anymore, but millions of us know it existed, because we lived in it: the Lost City of New York."
– Pete Hamill in New York Magazine, December 1987.

These days, it can be hard to fathom just how famous these guys could be. Breslin even sold breakfast cereal on TV ("Nothing gets my Irish up more than a soggy, wishy-washy cereal!"), while Hamill attracted much more than just readers. "The guy had another side, beyond the journalism," writer Gay Talese said of Hamill. "He had this almost movie star life. You know, with Miss Kennedy or Onassis, Shirley MacLaine. They were together for years."

Hamill said, "Fame was never the goal. You can't do any writing while you're trying to be famous."

"CBS This Morning" co-host Tony Dokoupil asked Hamill, "Do you remember what made you want to add your voice to the newspaper?"

"The sense of possibility," he replied.

Hamill was born in Brooklyn. "This is an immigrant nation, and Brooklyn was a capital of immigrants." Everybody there, he said, "had an old country."

Hamill's mother was a homemaker, and his father worked in factories.

Dokoupil asked, "Would you say you grew up poor?"

"Oh, we grew up poor, but not impoverished," Hamill said.

What's the difference? "The library."

Yes, the public library. He became a library regular before he could even read. If not for the library, where would Hamill be today? "I wouldn't be alive today if it wasn't for the lessons I learned in this place. It gave me a sense that there was a world beyond the limits of where I lived here in Brooklyn."

By the time he was invited to try out for a job at the New York Post, Hamill had read enough stories to start writing them, and with style.

Jimmy Breslin's sentences, by contrast, landed more like hammer blows. As the city was jolted by the shooting of two youths by "Subway Vigilante" Bernard Goetz in 1984, Breslin wrote:

"They burned down something irreplaceable in New York this week, and there were people who looked at the ashes and termed them beautiful. A man in the subway took out a gun and shot four people - two of them in the back - and then ran away. One of the two shot in the back was 19 and he will be a wheelchair for the rest of his life. And there were people who praised the gunman. As lawlessness was applauded, we in New York arrived at the sourest of all moments - when people become what they hate."

But while he cultivated a gruff reputation, Breslin was a reader, too. Hamill recalled: "One day he needed to find something in his desk. And he asked me to go to his desk, open the drawer and it'll be on the right-hand side. Lying in front of me is 'The Collected Poetry of W.H. Auden.'"

"So, here we have the difference between the mask and the man," said Dokoupil.

Over the years, both men branched into magazines and books, enough to fill a shelf at Hamill's old haunt, the Brooklyn Public Library.

Dokoupil asked, "Does it get easier from book one to book twenty?"

"I had to make the next one something new for me," he replied.

Hamill is now working on another book, and still finding time to read them, too, with his wife, journalist Fukio Aoki.

"I understand deadline is most important for both of us," Aoki said. "So, he has a deadline, I just try to be away from him. And you need help? You need a drink? (LAUGHS) Let him work. This is it."

Hamill said, "To have someone like her, to hold your hand, get you through the night, and the day, I've been lucky. The luckiest bastard alive."

The newspaper industry, of course, hasn't been so lucky. Today's staff at their old New York Daily News is about 1/10th of the size it was in 1988.

"Journalism, if it's any good, becomes history," Hamill said.

But with the recent documentary, Hamill hopes to inspire others to look for national success exactly where he and Jimmy Breslin found it – in local reporting.

When asked for his best, boiled-down advice for a young journalist today, Hamill replied. "Read. You can't write unless you read. Read the classics. If you've never read 'Madame Bovary,' it's a new book!"

And yes, he still has his library card. "I do, yes. I have it right here in my pocket in case somebody asks me!"

From Pete Hamill's introduction to his 1995 collection, "Piecework" (Back Bay Books):

"When I started writing for Dorothy Schiff's wonderful tabloid, I had no plans for the future, no certainties about a career. The Post was seventh in circulation among the city's seven dailies; we all knew it could fold the next morning, so it was imperative to live for tonight, for the next edition, even if that edition might be the last. I definitely wasn't there for the pension plan. Newspaper people were flamboyant, hard-drinking, bohemian anarchists, with a great gifts for obscenity and a cynicism based on experience. Or so I thought. I loved being in their company, in city rooms, at murder scenes, or standing at the bar after work.

"For me, the work itself was everything. I had grown up under the heroic spell of the Abstract Expressionist painters, and one of their lessons was that the essence of the work was the doing of it. At twenty-five, I thought I had started late and therefore had to hurl myself into the work – and the life that went with it. In my experience, nothing before (or since) could compare to walking into the New York Post at midnight, being sent into the dark, scary city on an assignment, and coming back to write a story for the first edition. No day's work was like any other's, no story repeated any other in its details. Day after day, week after week, I loved being a newspaperman, living in the permanent present tense of the trade. I had no idea as a young man that from my initiation into the romance of newspapers would flow novels, books of short stories, too many screenplays, a memoir, and millions of words of newspaper and magazine journalism. I didn't know that I was apprenticing to a trade that I would practice until I die."

Book excerpt: "The Queen of Tuesday" by Darin Strauss