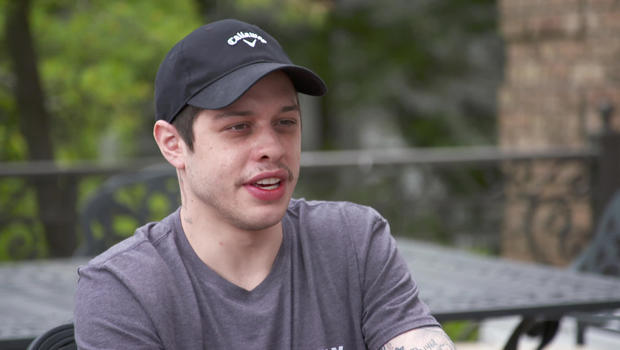 Pete Davidson is one of the most unlikely stars of "Saturday Night Live." Just 20-years-old when he made his debut, and the character he most frequently plays is himself.

But what really makes Davidson a longshot is that when he was asked to audition, he didn't even realize that "Saturday Night Live" was still on the air. "Yeah, I didn't know it was still around!" he laughed. "When you're 16 you're not, like, watching political, midnight shows."

"How did that change your life?" asked "CBS This Morning" co-host Tony Dokoupil.

"Oh, drastically. I started getting taken seriously as a comic. It really changed my life."

Now, at 26, Davidson's life may be about to change all over again. He is co-writer and star of his first major film, "The King of Staten Island," about a drifting twenty-something from New York's least-celebrated borough. It's a film, he said, that's about 75% autobiographical.

Showing Dokouopil his house, the SNL star said, "I live in the basement."

"I'm exactly what Staten Island is – someone living in their mom's basement!"

In the movie, Davidson's character is struggling after his father, a firefighter, dies in the line of duty. And if that doesn't exactly sound like a comedy – not even with Marisa Tomeii as mom, and Bill Burr as the guy trying to date her – Davidson has had a lifetime to find the humor in it.

"I just always wanted to show where I'm coming from," he said. "Pretty much like how a tragedy affects a family. And I think, like, there hasn't been many of those movies that are, like, really honest and transparent."

Davidson's own father died responding to the attacks on the World Trade Center when Pete was just seven.

Dokoupil asked, "Do you remember the moment you found out?"

"I don't remember the moment I found out, but I remember when I started to get curious, because a lot of his friends would be coming over. And he wasn't over," Davidson said. "I started to put two and two together that maybe something was wrong."

"Oh, yeah, absolutely. One of my best friends is forever gone."

But comedy became a way to cope, and as a teen he started doing open-mic nights in Manhattan, which lead to what he was sure would be his only season of "Saturday Night Live."

"How confident were you then as a comic?" Dokoupil asked. "It sounds like you were but then also you weren't?"

"I was really confident as a comic because, like, you have to be. When you're on stage, it's where I feel my most comfortable. But, like, off-stage, I never really thought I was – I don't think I'm a great comic or, like, anything like that. I'm very self-hating."

Judd Apatow co-wrote and directed "The King of Staten Island," after already helped the careers of some of comedy's biggest names, including Ben Stiller, Amy Schumer and Seth Rogen. He says Davidson has that kind of talent.

"Pete's just one of those guys, you see him and right away you think that he's gonna do great things," Apatow said. "The most important thing about Pete is he's just insanely funny.

"I always say to him, 'You know, me and most of my friends, we had to make 12 really goofy movies before attempting to do something like this.' I think there's really no limit to what Pete can do. I mean, he's a fantastic actor. He's a really fantastic writer. He was a great producer. And so, I do think it's just the beginning for Pete."

But as Davidson's career took off, his personal struggles deepened. And by 2017, he said, he was at his lowest, even at times suicidal.

Dokoupil asked, "How close did you get?"

"I got as close as you can get. I mean, just, like testing the waters. And until I met the right treatments and met the right doctors and did all the work that you need to do to, like, not feel that way, it got pretty dark and scary."

"So, that scene in the movie where you close your eyes on the road, was that based on something that really happened?"

"Yeah, that's true. I used to do that. That's horrible to say. But yeah, I used to close my eyes on a closed road, usually at night. And I would drive without a seatbelt."

But if 2017 was the worst year of his life, it was also the best, the year he found help, and – through the writing and making of his new movie – a possible way forward.

"I really wanted this to be, like, cleansing for me," Davidson said.

Cleansing how? "I feel like I got to speak about it in the biggest way possible, and I could get my story out there. So I feel like, now I could, like, let it go."

When asked if he thinks he'll ever leave Staten Island, Davidson replied, "Maybe one day. But right now I feel really comfortable here."

Whatever happens with the movie "The King of Staten Island," Pete Davidson said the work itself has been worth it, and always will be.

"I made a tribute to my mom and dad. And I got to face, you know, these things I've been avoiding for a really long time head-on. And I couldn't ask for, you know, anything more, really."

To watch a trailer for "The King of Staten Island" click on the video player below: