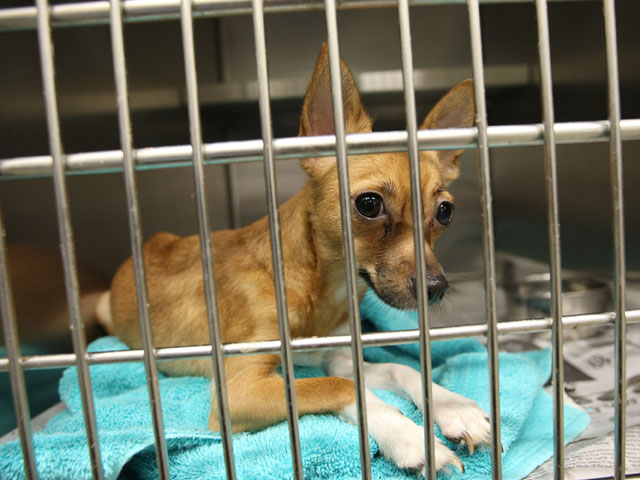 LOS ANGELES - Seven in 10 pet owners say they believe animal shelters should be allowed to euthanize animals only when they are too sick to be treated or too aggressive to be adopted.

Only a quarter of the people who took part in a recent AP-Petside.com poll said animal shelters should sometimes be allowed to put animals down as a population control measure.

Gisela Aguila, 51, of Miramar, Fla., believes shelter animals should only be euthanized when there is no chance they'll be adopted, for example, if they are extremely ill or aggressive. "I don't think shelters should be euthanizing animals to control the population," she said.

She'd like to see an end to shelters destroying animals when they run out of room, saying, "We are way too civilized of a society to allow this."

But Leslie Surprenant, 53, of Saugerties, N.Y., believes shelters should be allowed to control populations. She says no-kill shelters that only accept animals with good prospects for adoption or that turn away animals once the shelter reaches capacity do not solve the problem.

"That doesn't truly mean no-kill shelters. It means there are more animals out on the streets being hit by cars and starving and living in dumpsters," said Surprenant, who has two dogs and a cat. "It does not mean the general population is lower; it just means that they've opted not to kill."

Surprenant believes spaying and neutering is the way to go. In fact, higher rates of spaying and neutering in recent decades have cut the number of abandoned puppies and kittens, which in turn has cut euthanasia rates. Before 1970, about 20 million animals were euthanized each year in this country. In 2011, fewer than 4 million abandoned animals were euthanized.

Younger pet owners are most likely to favor no-kill policies, with 79 percent of those under 30 saying shelters should only euthanize animals that are untreatable or too aggressive, compared with 67 percent of those age 50 or over saying that.

The poll results are encouraging to leaders of the nation's no-kill movement, who'd like to see the U.S. become a "no-kill nation" with homes for every adoptable pet, and euthanasia reserved only for extremely ill or aggressive animals.

Any plan will take teamwork between shelters with government contracts that must accept every animal and the no-kill shelters that often only take animals they can help, said Ed Sayres, president and CEO of the American Society for the Prevention of Cruelty to Animals.

Rich Avanzino, president of Alameda-based Maddie's Fund, pioneered no-kill in San Francisco in the early `90s through a pact between the open-admission city shelter and the local Society for the Prevention of Cruelty to Animals.

"We are just a breath away from doing what is right for the animals," Avanzino said.

He believes the country can achieve no-kill status by 2015, partly due to corporate giving to animal causes, which totaled about $30 million in 2010 and is expected to reach $70 million by 2015. That money can help with spaying, neutering and outreach, he said.

Public attitudes are also changing, with more people saying it's unacceptable for pets to languish or die in an animal shelter, Avanzino said.

Avanzino pioneered the no-kill concept in San Francisco. Sayres succeeded him and nurtured it, then went to New York and implemented it there in a much bigger way. The model is the same, but instead of two partner agencies like in San Francisco, New York has 155, Sayres said.

About 44,000 animals enter New York City shelters each year. Since Sayres has been there, the euthanasia rate has dropped from 74 percent to 27 percent.

The ASPCA has also teamed up with 11 communities from Tampa, Fla., to Spokane, Wash., in no-kill efforts, Sayres said.

He believes he will see a no-kill nation, at least for dogs, in his lifetime. Cats may take a little longer because of the large feral population, he said.

The euthanasia issue attracted some attention this week when it was reported that a stray cat being held at a West Valley City, Utah, animal shelter survived two trips to the shelter's gas chamber. The shelter has stopped trying to kill the cat, named Andrea, and she has been adopted. Shelter officials are investigating why the gassing failed.

More than 800 grass-roots rescue organizations belong to Best Friends' No More Homeless Pets Network and are working to make their communities no-kill, Castle said. Attendance at an annual conference for network members has grown from 250 in 2001 to 1,300 last year.

The sanctuary's newest venture is a groundbreaking effort involving what Castle believes is the largest public-private partnership ever forged in the no-kill movement.

Best Friends is going to operate a shelter for the Department of Animal Services in Los Angeles as an adoption and spay and neuter center, he said. All animals will come from six open-admission Los Angeles city shelters.

Differences in the varying no-kill campaigns are mostly a matter of nuance, Castle said, and how you define sick and aggressive.

Nathan Winograd, director of the Oakland-based No Kill Advocacy Center, believes 95 percent of all animals entering shelters can be adopted or treated. And even though the other 5 percent might be hopelessly injured, ill or vicious, he said they should not all be doomed.

Some, if not most of them, can be cared for in hospice centers or sanctuaries, he said. As for pit bulls and other dogs with aggressive reputations, he said shelters need to do a better job of trying to find them homes.

The AP-Petside.com Poll was conducted Oct. 13-17, 2011, by GfK Roper Public Affairs and Corporate Communications. It involved landline and cellphone interviews with 1,118 pet owners. Results among pet owners have a margin of sampling error of plus or minus 3.6 percentage points.