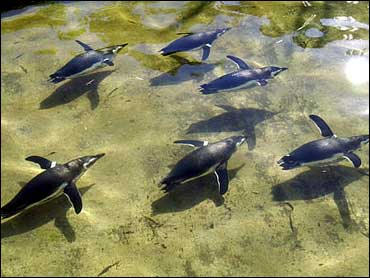 They've got a penguin problem at the San Francisco Zoo. Specifically, the penguins are swimming in circles. All day, every day.

"We've lost complete control," said Tollini. "It's a free-for-all in here. My old geezers have swum more in the last three months than they have in five and a half years. They're putting on frequent flyer miles."

For some reason the Penguins, which have spent most, if not all their lives in captivity, suddenly have come to believe they are back home in South America and its time to migrate to Brazil.

It all started in November when six newcomer Magellannic penguins, formerly of Sea World in Aurora, Ohio, were brought in.

Since then the penguin pool at the San Francisco Zoo has been a daily frenzy of circle swimming by all of the 52 birds at once.

The penguins start swimming in circles early in the day and rarely stop until they stagger out of the pool at dusk.

The six penguins from Ohio started it all, Tollini said, apparently convincing the others to join them for the watery daily circuit.

The new birds jumped in and started swimming. Soon everybody had embarked on a two thousand mile migration.

"I can't figure out how the Aurora penguins communicated and changed the minds of the other 46," Tollini said.

Some penguin experts point to the highly social animals as being open to new ideas fostered by newcomers in to the zoo's so-called Penguin Island.

"Penguins are extraordinarily social birds," said Christina Slager, associate curator at Monterey Bay Aquarium. She has studied Magellanics in the wild in Patagonia and Chile.

"And they're very, very inquisitive. If you combine those facts and put in a new stimulus, like the six new penguins, they have to check it out."

"Genetically, they're designed to swim," Schaller said. "I'd be more amazed if the six had learned to do something not in penguin nature and showed the other 46 how to do it - like if the birds were trained to jump through a hoop."

Still, the penguins may be swimming for a quite a while. The trip from Argentina to Brazil equals 26 thousand laps of their pool.