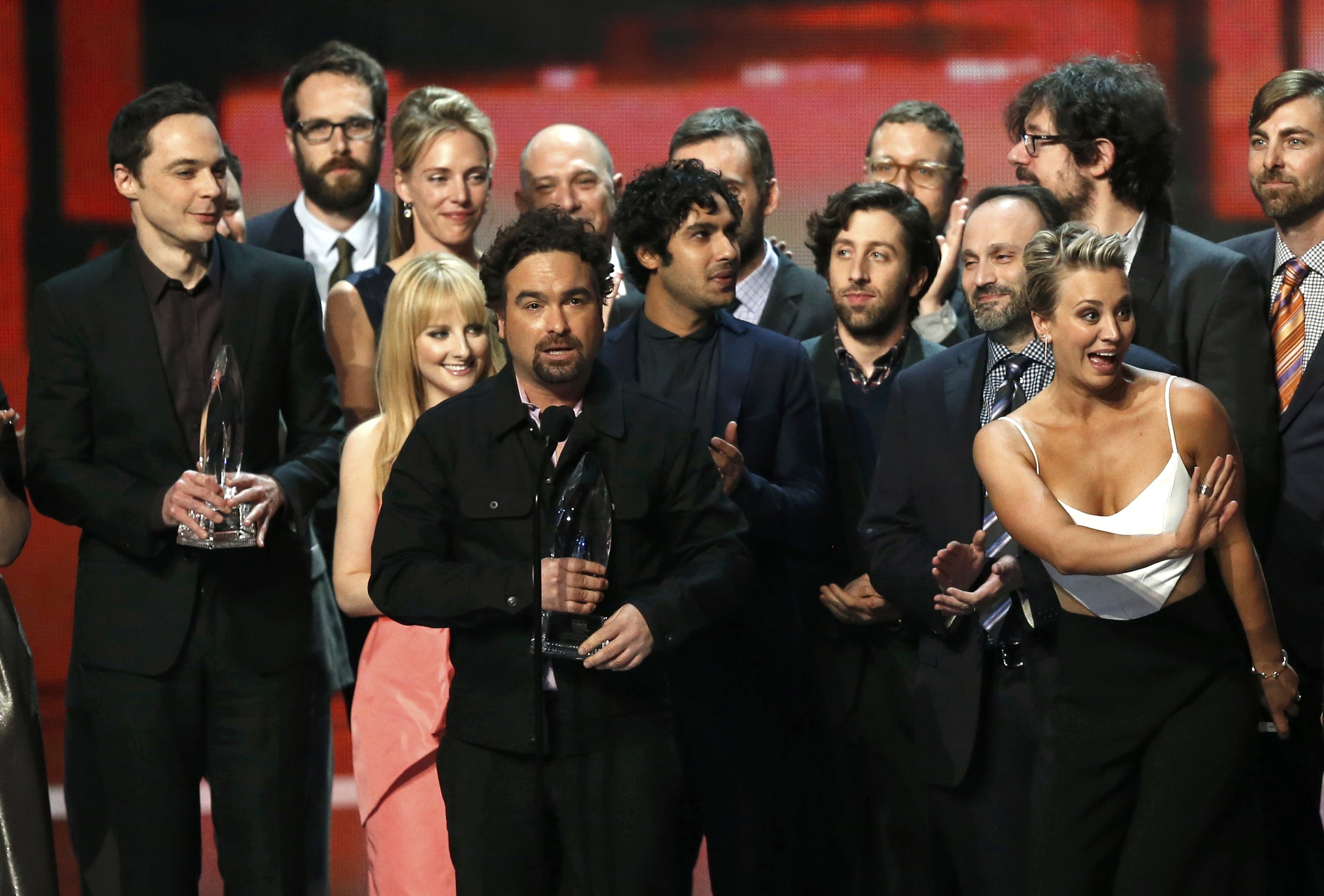 Some of the biggest names in TV, film and music stepped out in Los Angeles Wednesday for the 2015 People's Choice Awards -- a ceremony where winners were hand-picked by fans.

Throughout the night, stars hit the stage expressing their appreciation for fans and talking about longevity in show business.

CBS' "The Big Bang Theory" won big -- taking home best television show. "We truly have a love and passion for making this show together," said co-star Johnny Galecki. "Honestly, it's a dream come true every day, and it's never lost on any of us for a split-second that it's entirely due to your love and support."

"Big Bang:" co-star Kaley Cuoco-Sweeting nabbed favorite comedic TV actress. "I know most of the votes are probably from my parents, thank you," she joked. "I love playing Penny, and I hope to play her for many more years."

Anna Faris and Allison Janney, the show's co-hosts, kicked off the evening with a pre-taped sketch featuring Faris' husband, actor Chris Pratt. They soon hit the stage with a batch of jokes.

"We are completely live, so keep everything clean -- especially you Betty White," said Janney.

The first award of the night went to Melissa McCarthy for favorite comedic movie actress. "I want to thank the fans that go out and buy movie tickets and allow me to do what I do. Thanks for the job," the "Mike and Molly" actress said. "Without you I would not have a job and I'm going to stick around as long as you have me."

When White hit the stage later to accept the honor for favorite TV icon, she referenced McCarthy's speech from earlier, saying, "When Melissa McCarthy said she said that she'd stay as long as you let her...Well, you've abused the privilege with me...Can you imagine the People's Choice at 93 [years old]?" She topped Katey Sagal, Mark Harmon, Tim Allen and Tom Selleck.

The favorite movie actor honor (and favorite dramatic movie actor) trophies went to Robert Downey Jr. "Well this is perfect...because I love people. I'm crazy about movies and I prefer people who are crazy about my movies," said the "Iron Man" star, later adding, "I want to eat you up. And you're not going anyway."

Adam Sandler walked away with favorite comedic movie actor. "This really means a lot to me," said Sandler, who added, "Thanks for all these years -- for being so nice to me."

USA Network's "White Collar" went off the air at the end of 2014, but that didn't stop fans from voting for series star Matt Bomer, who won favorite cable TV actor.

The "Grey's Anatomy" cast -- other big winners of the night -- thanked fans for tuning in every week, keeping their ABC show on for so long.

And Viola Davis, star of ABC's "How to Get Away with Murder," took home favorite actress in a new TV series. "You know, we actors -- we do it for you...we do it to move you, to provoke you...Thank you so much for this...I'm so happy that people have accepted me in this role...at this stage in my career," she said.

Music was recognized, too, with the favorite hip-hop artist honor going to rapper Iggy Azalea. "This is an amazing way to start the year...I didn't expect this, so I wrote nothing. It's not wasted on me."

"I've been called a lot of things in my life, but I'm not sure that humanitarian has been one of them until recently," he said before honoring the "real humanitarians" in the Congo, where he has focused a lot of his charitable work. "Sometimes the world is just a terrible and scary place...But one thing I learned by watching people...is trying to do just a little bit...the one way to combat the sad things we see...is to try to bring a little bit of kindness into the world."

An array of additional celebrities were also in attendance, including Patricia Arquette, Jon Cryer, Portia de Rossi, Emily Deschanel, Donald Faison, Billy Gardell, the cast of "Grey's Anatomy," Kristen Johnston, Katharine McPhee, Olivia Munn, Chloe Grace Moretz, Eric Christian Olsen and Daniela Ruah, among others. The cast of HBO's "Entourage" reunited onstage at the ceremony ahead of their upcoming movie, due out this year.

In between awards and performances were several pre-taped segments featuring Janney and Farris -- some of which got a laugh from the crowd.

"We don't know what we're doing," Janney told The Associated Press prior to the ceremony. "We've never hosted a show before. I think they're crazy for having picked us. And we're going to prove it."

Now in its 41st year, winners of the People's Choice Awards, which aired on CBS, were voted on entirely by the public.

Tell us: What did you think about this year's People's Choice Awards?

Will Smith was asked to leave the Oscars but refused, the Academy says
More
Lauren Moraski