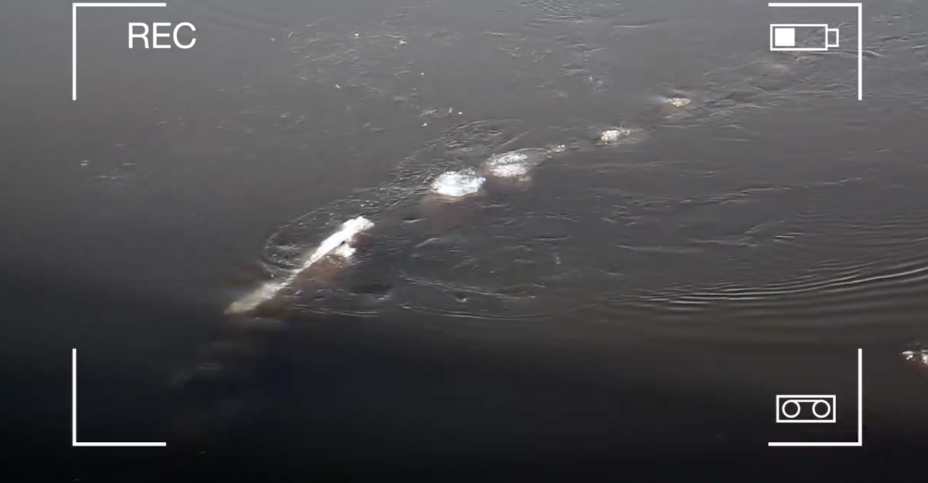 A short video of a “strange thing” spotted in the Chena River in Fairbanks, Alaska, is spurring lots of wild theories online.

Some are calling it an “Ice Monster,” citing the legend of Scotland’s Loch Ness Monster, while others suggest it could be anything from a “giant arctic crocodile” to a “zombie salmon.”

An Alaska Bureau of Land Management employee in Fairbanks was checking out ice on the river last week when he noticed something moving up the river, and pulled out a camera to record the unusual sight.

It looked like ice chunks but moved together in a side-to-side motion. A dark shadow cast underneath the icy surface caused some to wonder: is it a creature?

“Our employees did not investigate. It’s kind of far out in the middle of the river,” the Bureau of Land Management - Alaska explained on its Facebook page. “Video was taken right by our BLM Fairbanks District Office facing downstream. We’re not sure what it is. We’re letting you all be the judge.”

The video has been viewed more than 380,000 times and shared by nearly 4,000 people since it was posted last week.

Employees at the Alaska Bureau of Land Management had fun with footage, adding eery music to the nearly 25-second video clip.

Some guessed it could be an Alaskan sturgeon, a “beavegator” or maybe a bull shark. Others believe it wasn’t an animal of any kind.

“Covered in ice, so it’s NOT a fish. Likely a chunk of moose hide, or other debris caught up on something and waving in the current,” one commenter guessed.

“I had a natural science professor from Paul Smiths College, who’s also a zoology and geology graduate from Duke tell me its slush caught in 2 adjacent currents,” another said.

Officials at the Alaska Bureau of Land Management enjoyed reading people’s wild guesses, but admitted they don’t expect to find an answer any time soon.

“Like you all, we honestly don’t know exactly what it is,” the group said. “But all the guesses are great!”

Know the rules for taking photos, videos on planes
Thanks for reading CBS NEWS.
Create your free account or log in
for more features.
View CBS News In
CBS News App Open
Chrome Safari Continue
Be the first to know
Get browser notifications for breaking news, live events, and exclusive reporting.