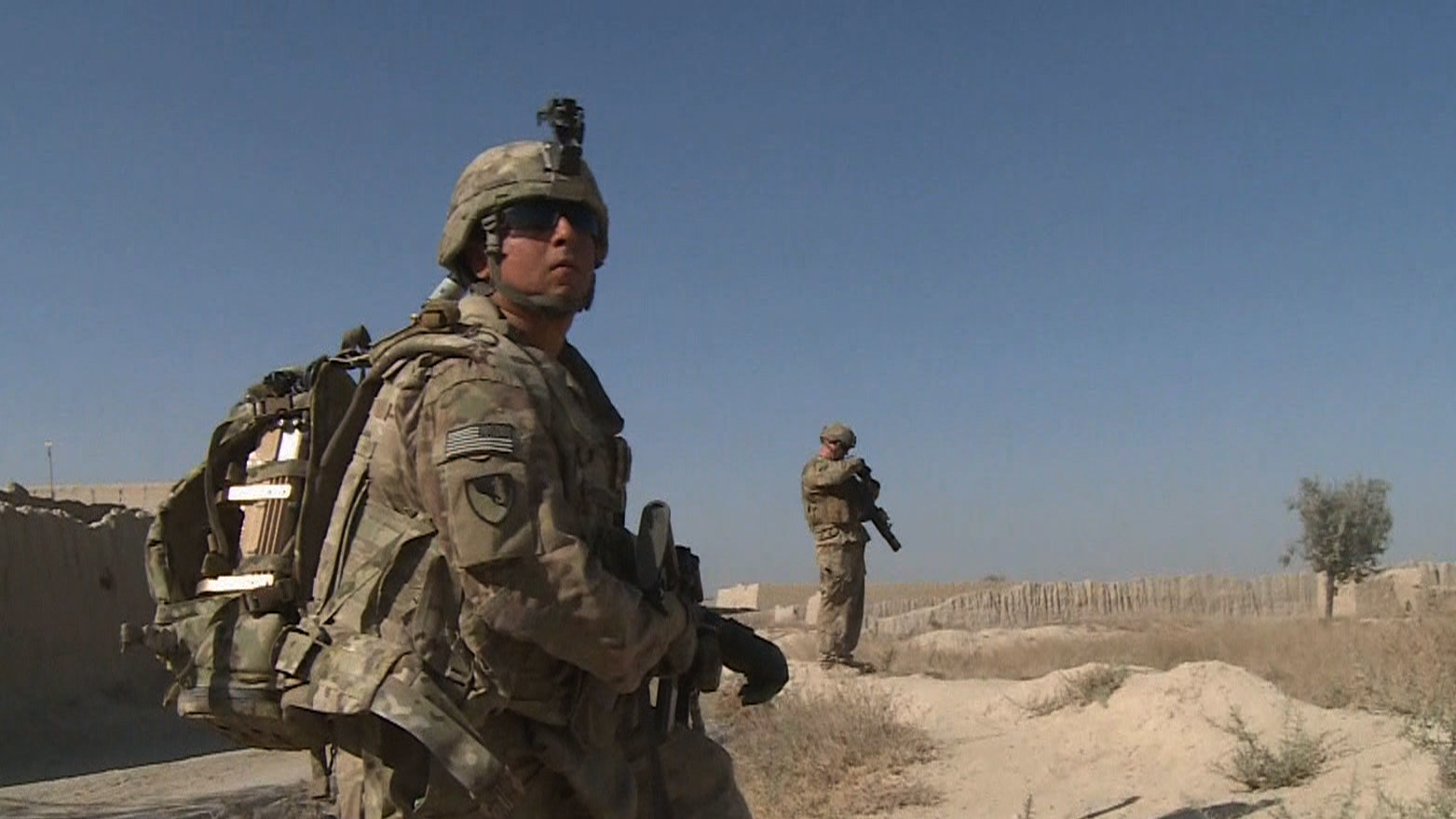 WASHINGTON -- The Pentagon is making plans to send additional U.S. troops to Afghanistan. While the number is currently expected to be between 3,000 and 5,000 troops, the number is still being worked on, reports CBS News' national security correspondent David Martin.

The decision by Defense Secretary Jim Mattis could be announced in the next several days or couple of weeks. It follows Trump's move to give Mattis the authority to set troop levels and seeks to address assertions by the top U.S. commander in Afghanistan that he doesn't have enough forces to help Afghanistan's army against a resurgent Taliban insurgency. The rising threat posed by Islamic State extremists, evidenced in a rash of deadly attacks in the capital city of Kabul, has only fueled calls for a stronger U.S. presence, as have several recent American combat deaths.

The bulk of the additional troops will train and advise Afghan forces, according to the administration official, who wasn't authorized to discuss details of the decision publicly and spoke on condition of anonymity. A smaller number would be assigned to counterterror operations against the Taliban and IS, the official said.

Chief Pentagon spokesperson Dana W. White said no decisions have been made.

"Secretary Mattis has made no decisions on a troop increase for Afghanistan," White told CBS News in a statement. "As he said throughout the week in testimony, the revised Afghanistan strategy will be presented to the president for his approval in the coming weeks. The president has delegated force management authority for Afghanistan to the secretary. The secretary will continue to follow the president's guidance on our overall strategy. Any decisions about troop numbers will be made only after consultation with the interagency, the Afghan government, NATO allies and coalition partners."

The Trump administration's strategy for Afghanistan was supposed to be finalized before the NATO meeting in Brussels, Belgium, last month. The Trump strategy is now expected to be complete by mid-July, as Mattis testified before Congress earlier this week. But the justification to lift the cap on troop numbers ahead of an actual strategy was that Afghan President Ashraf Ghani's government was shaken by recent bombings in the country, and additional U.S. support will help stabilize the situation.

The White House has dismissed the idea that U.S. domestic politics play a role in the timing of the timing of additional troops. President Trump was presented with the idea of allowing additional trainers on Monday, and signed off on it on Tuesday, in efforts to help out Ghani sooner rather than later. The president met with Ghani briefly in Saudi Arabia last month. There are currently no scheduled visits for Ghani to visit the White House, considered a snub by many Afghan officials, given that there are more than 8,400 U.S. troops serving in Afghanistan.

Daulat Waziri, spokesman for Afghanistan's defense ministry was reluctant to comment on specifics Friday but said the Afghan government supports the U.S. decision to send more troops. "The United States knows we are in the fight against terrorism, " he said. "We want to finish this war in Afghanistan with the help of the NATO alliance."

An Afghan lawmaker, Nasrullah Sadeqizada, however, was skeptical about additional troops and cautioned that the troop surge should be coordinated with the Afghan government and should not be done unilaterally by the United States. "The security situation continues to deteriorate in Afghanistan and the foreign troops who are here are not making it better," he said.

Although Trump has delegated authority for U.S. troop numbers in Afghanistan, the responsibility for America's wars and the men and women who fight in them rests on his shoulders. Trump has inherited America's longest conflict with no clear endpoint or a defined strategy for American success, though U.S. troop levels are far lower than they were under Presidents Barack Obama and George W. Bush. In 2009, Obama authorized a surge of 30,000 troops into Afghanistan, bringing the total there to more than 100,000, before drawing down over the rest of his presidency.

Trump has barely spoken about Afghanistan as a candidate or president, concentrating instead on crushing the Islamic State group in Syria and Iraq. His predecessors both had hoped to win the war. Bush scored a quick success, helping allied militant groups oust the Taliban shortly after the Sept. 11, 2001, attacks, before seeing the gains slip away as America's focus shifted to the Iraq war. In refocusing attention on Afghanistan, Obama eliminated much of the country's al-Qaida network and authorized the mission that killed Osama bin Laden, but failed to snuff out the Taliban's rebellion.

Mattis' deployment of more troops will be far smaller than Obama's.

While military leaders have consistently said more forces are needed, a decision had been tied up in a lengthy, wider debate about America's long-term military, diplomatic and economic strategy for ending the war. Gen. John Nicholson, the top U.S. commander there, has said the troops are necessary to properly train and advise the Afghan military and perform work handled at greater cost by contractors. Afghan leaders endorse the idea of more U.S. troops, having lost significant ground to the Taliban in recent months.

But despite repeated questions from Congress this week, Mattis wouldn't reveal his thinking on a troop increase. He said that while counterterrorism efforts in Afghanistan are making progress in weakening al-Qaida and IS, "their defeat will come about only by giving our men and women on the ground the support and the authorities they need to win."

Obama set a cap a year ago of 8,400 troops in Afghanistan after slowing the pace of what he hoped would be a U.S. withdrawal.

Nevertheless, there are at least another 2,000 U.S. troops in Afghanistan not included in the official count. These include forces that are technically considered temporary even if they've been in the war zone for months.

Trump's decision Tuesday to give Mattis authority to set force levels in Afghanistan mirrored similar powers he handed over earlier this year for U.S. fights in Iraq and Syria. The change was made public hours after Sen. John McCain, the Senate Armed Services Committee's Republican chairman, blasted Mattis for the administration's failure to present an overarching strategy for Afghanistan. McCain said the U.S. is "not winning" in Afghanistan, and Mattis agreed.

The finality of the decision isn't entirely clear. While Trump has handed over the troop level decision-making, there is nothing preventing him from taking it back.

Mattis has repeatedly stressed that increasing the number of U.S. troops in Afghanistan would take place within a broader, long-term strategy for stabilizing Afghanistan. In congressional testimony this week, he said the strategy will take into account regional influences, such as Pakistan's role as a Taliban sanctuary. Regional powers Iran, India and China, which all have political stakes in the fate of Afghanistan, also must be considered.

While the new troops could raise fears of mission creep, Mattis told lawmakers this week he didn't envision returning to the force levels of 2010-11, when Obama thought he could pressure the Taliban into peace talks. Despite heavy losses, the Taliban fought on.

"We're not looking at a purely military strategy," he said. "All wars come to an end. Our job is to end it as quickly as possible without losing the very mission that we've recognized, through several administrations, that was worth putting those young Americans on the line for."

There have been almost 2,400 U.S. military deaths in Afghanistan since 2001. Three U.S. soldiers were killed and another was wounded in eastern Afghanistan this weekend in an attack claimed by the Taliban.

TikTok CEO to testify before Congress in March