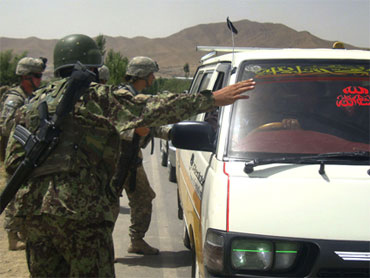 The Pentagon has released the name of a sailor who went missing last week in Afghanistan and is presumed to be in the hands of the Taliban.

The Pentagon lists Petty Officer 3rd Class Jarod Newlove as "whereabouts unknown." The Pentagon is not confirming that Newlove was captured.

The Taliban has said militants captured a U.S. sailor after a fire fight in a Taliban-controlled area. Newlove is 25 years old and from Renton, Washington.

The Pentagon also confirmed the name of a sailor who was killed in the same incident. He was Petty Officer 2nd Class Justin McNeley. He was 30 and from Wheatridge, Colorado.

One of two U.S. sailors missing in Afghanistan since last week has been confirmed dead and his body recovered, a NATO spokesman said Tuesday.

The search continues for the other missing sailor, said Lt. Col. Todd Breasseale, a spokesman for NATO and U.S. forces in Afghanistan.

The two Navy sailors went missing Friday in the eastern province of Logar, after an armored sport utility vehicle was seen driving into a Taliban-held area. NATO officials were unable to say what they were doing in such a dangerous part of eastern Afghanistan.

The Taliban have said previously that they killed one of the two men in a firefight and captured the other.

On Monday, the Taliban claimed to have killed two more U.S. troops with a landmine attack on a tank in the area where the massive search was underway for the missing sailor, but that claim appeared to have been a fabrication as NATO and Afghan officials were unaware Tuesday of any such attack.

Jim Kerr, a Colorado legislator from the south-Denver suburb of Littleton, said the Navy sailor killed was his wife's nephew, Justin McNeley, 30. He said the family learned of his death Monday. He said McNeley's mother is in Kingman, Arizona, but declined to give her name.

Kerr told The Denver Post that McNeley, a non-commissioned officer and father of two sons, was due to return to the U.S. in August.

The Taliban have said the captured sailor is in a "safe place" where he will not be found.

In a statement, the NATO-led command said the body was recovered Sunday after an extensive search and that the coalition "holds the captors accountable for the safety and proper treatment of our missing service member."

The only other American service member in Taliban captivity is Spc. Bowe Bergdahl of Hailey, Idaho, disappeared June 30, 2009, in Paktika province, also in eastern Afghanistan. That area is heavily infiltrated by the Haqqani network, which has deep links to al Qaeda. He has since appeared on videos posted on Taliban websites confirming his captivity.

Hundreds of fliers, with reprinted photos of the two missing sailors, have been distributed throughout Logar province where NATO troops were stopping vehicles, searching them and those inside. The fliers say a $20,000 reward is being offered for information leading to the sailors' location.