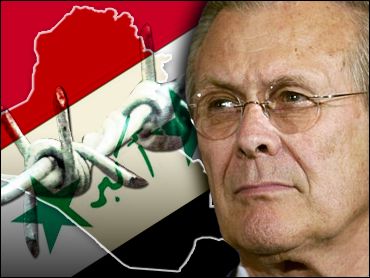 The story, written by reporter Seymour Hersh, said Rumsfeld decided to expand the program last year, broadening a Pentagon operation from the hunt for al Qaeda in Afghanistan to interrogation of prisoners at Abu Ghraib prison in Baghdad.

"And the goal was to use a couple of very harsh means, one, sexual humiliation, another, a more physical force," Hersh told CBS News Face The Nation host Bob Schieffer. "That -- and I'm not saying Rumsfeld authorized what we saw in the last few weeks, but he did authorize these guys to come into the prison system and jack it up, get better stuff."

Also speaking on Face The Nation, top Democrat on the Senate Armed Services Committee, Sen. Carl Levin of Michigan said the Armed Services panel will do everything it can to find out what happened -- and whether there's any validity to the report.

"A full-blown investigation was required before this most recent article by Seymour Hersh, and I have assurance from Senator (John) Warner that there is going to be -- there are going to be extensive hearings with extensive numbers of witnesses called. He's already given that indication," Levin said.

Warner is the chairman of the Senate Armed Services Committee.

Levin also said that there's clear evidence that the abuse wasn't just the work of a few soldiers -- and that the policy went up the chain of command.

He told "Fox News Sunday" that photos that haven't been released indicate that there are "many people" in the room, helping to organize the prisoner abuse.

Seven soldiers are facing military charges related to the abuse and humiliation of prisoners captured by the now-infamous photographs at the prison. Some of the soldiers and their lawyers have said military intelligence officials told military police assigned as guards to abuse the prisoners to make interrogations easier.

According to the story, which hits newsstands Monday, the initial operation Rumsfeld authorized gave blanket approval to kill or capture and interrogate "high value" targets in the war on terrorism. The program stemmed from frustrating efforts to capture high-level terrorists in the weeks after the start of U.S. bombings in Afghanistan.

The program got approval from President George W. Bush's national security adviser, Condoleezza Rice, and Bush was informed of its existence, the officials told Hersh.

Under the program, Hersh wrote, commandos carried out instant interrogations — using force if necessary — at secret CIA detention centers scattered around the world. The intelligence would be relayed to the commanders at the Pentagon.

Last year, Rumsfeld and Stephen Cambone, his undersecretary for intelligence, expanded the scope of the Pentagon's program and brought its methods to Abu Ghraib, Hersh wrote.

Critics say the interrogation rules, first laid out in September after a visit to Iraq by the then-commander of the prison for terror suspects at Guantanamo Bay, Cuba, amounted to a green light for abuse.

Defense Department officials deny that, saying prisoners always are treated under guidelines of the Geneva Conventions.

"No responsible official of the Department of Defense approved any program that could conceivably have been intended to result in such abuses as witnessed in the recent photos and videos," Di Rita said in his statement. "This story seems to reflect the fevered insights of those with little, if any, connection to the activities in the Department of Defense."

Di Rita also said Cambone has never had any responsibility for any detainee or interrogation programs.

The intelligence sources told the magazine photos of the sexual abuse were used to intimidate prisoners and detainees into providing information on the insurgency. It was thought that some prisoners would do anything — including spying on their associates — to avoid dissemination of the shameful photos to family and friends.

One intelligence official said the CIA ended its involvement with the program at Abu Ghraib prison by last fall.

"They said, 'No way. We signed up for the core program in Afghanistan — pre-approved for operations against the high-value terrorist targets — and now you want to use it for cabdrivers, brothers-in-law, and people pulled off the streets,"' the source said.

Rumsfeld paid a one-day visit to Iraq on Thursday to look into the prison scandal and boost the morale of U.S. troops.

Meanwhile, President Bush sought to shift the focus from the prisoner abuse in his weekly radio address Saturday, insisting those who beheaded American businessman Nicholas Berg must be hunted down as part of a strategy ultimately designed to bring peace to Iraq.

In the Democrats' weekly radio address, presidential candidate and Mass. Sen. John Kerry said the United States "has a duty to guarantee that, when mistakes are made, those responsible are held accountable whether they are at the bottom of the chain of command or at the top."