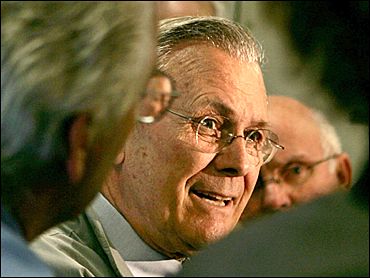 Defense Secretary Donald H. Rumsfeld on Thursday visited Abu Ghraib prison, the facility at the center of the detainee abuse scandal, and dismissed as "garbage" any suggestion the Pentagon tried to cover up the mistreatment of prisoners.

He also said lawyers are advising the Pentagon not to publicly release any more photographs of abuse.

"As far as I'm concerned, I'd be happy to release them all to the public and to get it behind us," Rumsfeld told reporters. "But at the present time I don't know anyone in the legal shop in any element of the government that is recommending that."

The government lawyers argue that releasing such materials would violate a Geneva Convention stricture against presenting images of prisoners that could be construed as degrading, Rumsfeld said while en route to Baghdad on a trip that was not announced in advance due to security concerns.

Members of Congress viewed fresh photos and videos of Iraqi prisoner abuse on Wednesday, and said they included disturbing images of torture and humiliation.

Several senators, speaking on condition of anonymity, said the photos showed military dogs snarling at cowering prisoners, as well as shots of Iraqi women commanded to expose their breasts.

Some key senators thought the pictures should remain secret — and not just because they are evidence in a criminal investigation, reports CBS News Correspondent David Martin.

"It diminishes these photos from inspiring the enemy from inflicting further damage, harm, otherwise on the members of the armed forces of the United States," said Sen. John Warner, R-Va.

Maj. Gen. Geoffrey Miller, who runs the prison system in Iraq, on Thursday defended his role in advising U.S. authorities last fall on how to set up a detention and interrogation system that would produce useful intelligence on people involved in the insurgency.

Before taking charge of Iraq prisons, Miller had commanded the U.S. prison compound at Guantanamo Bay, Cuba, where hundreds of suspected terrorists are still detained from the war in Afghanistan.

In a report last fall, before he took over Abu Ghraib, Miller recommended that military police guards in Iraq help "set the conditions" for interrogation. The Army investigator who probed the Abu Ghraib abuse, Maj. Gen. Anthony Taguba, has criticized Miller's recommendation.

Miller said Thursday, "I'm absolutely convinced we laid down the foundations for how you detain people humanely."

Rumsfeld fiercely defended the Pentagon's response to the revelations.

"The garbage that you keep reading — about cover-up and the Pentagon doing something to keep some information from people — is unfair, inaccurate and wrong," he said. "And if I find any evidence that it's true, I'll stop it."

Rumsfeld also predicted that the abuse scandal would get worse in the days ahead.

"More bad things will come out, unquestionably," he said without being specific. "And time will settle over this and we'll be able to make an assessment of what the effect has been" on the effort to stabilize Iraq. "It clearly has not been helpful. It has been unhelpful."

Among his first responses to the international outcry over the abuse photos, Rumsfeld sent Vice Adm. Albert T. Church, the Navy's top investigative officer, to the Guantanamo prison camp last week. Church, who accompanied Rumsfeld on his trip to Iraq, told reporters that he found no major problems at that prison.

Church found eight violations. Four were violations by military police soldiers who guard the detainees at Guantanamo, three were violations by interrogators and one was a barber who gave a detainee an "unauthorized haircut" — a Mohawk-style cut that Church said amounted to humiliating the prisoner.

One of the violators, who punched a detainee in handcuffs, was punished by having his rank reduced, Church said.

Church said he felt confident in saying there currently are no major lapses in the humane treatment of Guantanamo prisoners, but he added that he could not be 100 percent sure because he took sworn testimony from only 43 people there, in addition to reviewing medical records of 100 detainees.