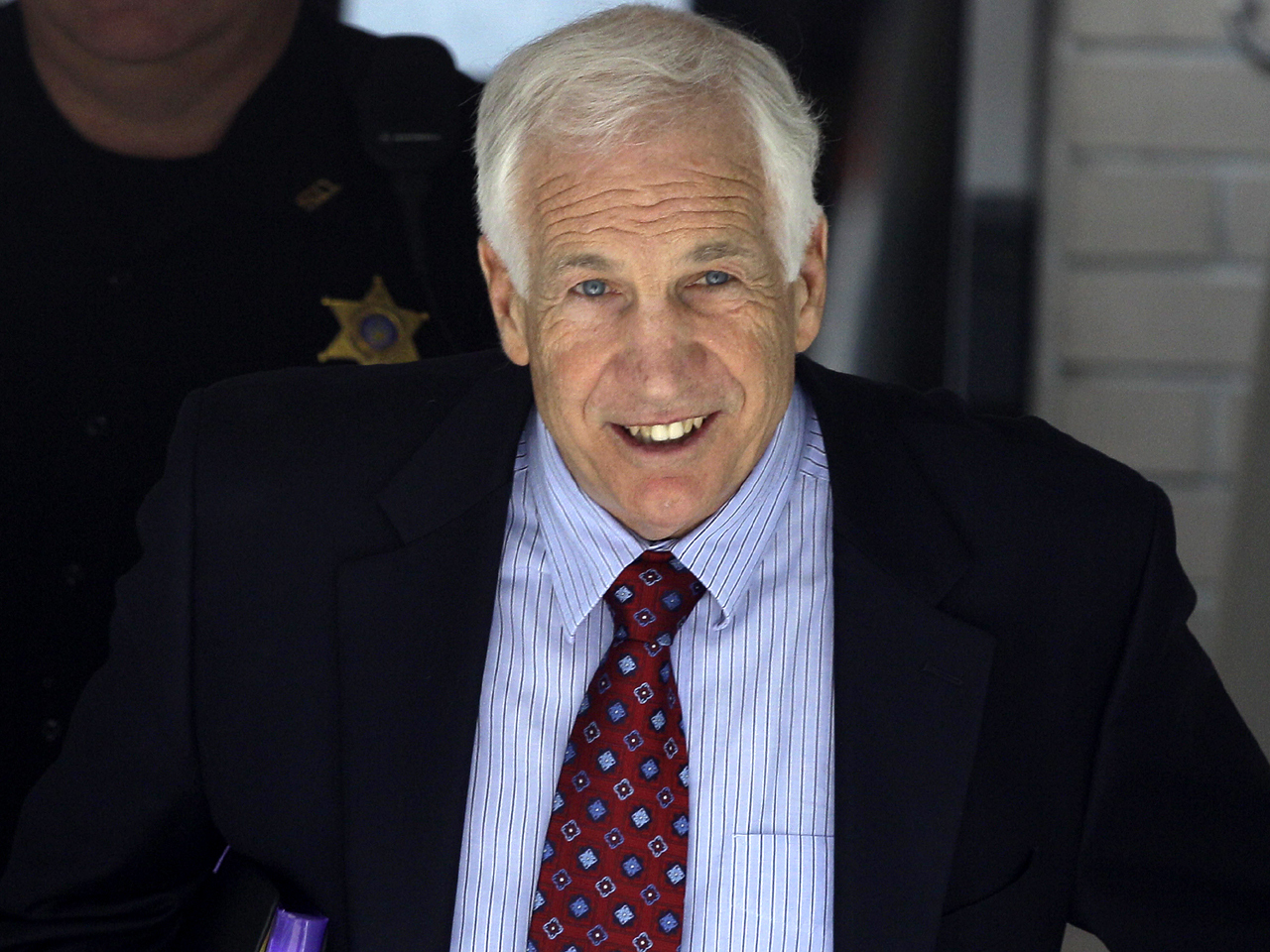 (CBS/AP) Penn State's internal investigation into the Jerry Sandusky scandal found that senior leaders at the university displayed "total disregard" for the children victimized by the former assistant football coach, according to a report released Thursday.

A team led by former federal judge and FBI director Louis Freeh interviewed hundreds of people to learn how the university responded to warning signs that its once-revered former defensive coordinator -- a man who helped Hall of Fame football coach Joe Paterno win two national titles while touting "success with honor" -- was a serial child molester.

Video: Jay Paterno: My father reported what he knew

"Our most saddening and sobering finding is the total disregard for the safety and welfare of Sandusky's child victims by the most senior leaders at Penn State," Freeh told reporters during a morning press conference. "The most powerful men at Penn State failed to take any steps for 14 years to protect the children who Sandusky victimized."

After an eight-month inquiry, Freeh's firm produced a 267-page report finding that Paterno, athletic director Tim Curley, university vice president Gary Schultz, who oversaw the campus police department, and university president Graham Spanier "never demonstrated, through actions or words, any concern for the safety and well-being of Sandusky's victims until after Sandusky's arrest."

The May 1998 complaint by a woman whose son came home with wet hair after showering with Sandusky didn't result in charges at the time. The report says Schultz was worried the matter could be opening "Pandora's box."

Officials later did bar him from bringing children to campus.

Karen Peetz, the chairwoman of Penn State's board of trustees, said the panel believes Paterno's "61 years of excellent service to the university is now marred" by the scandal and how he handled the accusations. Peetz also said the board"accepts full responsibility for the failures that occurred," but that no board members would be stepping down. Another trustee, Kenneth Frazier, said, "Our hearts remain heavy and we are deeply ashamed."

Inside Penn State's decision not to report Sandusky abuse
Freeh: Paterno failed in "actions and words"
Penn State trustees: "We are accountable"

Freeh also said Sandusky's conduct was in part a result of the school's lack of transparency, which stemmed from a "failure of governance" on the part of officials and the board of trustees. He said the collective inaction and mindset at the top of the university trickled all the way down to a school janitor who was afraid for his job and opted to not report seeing sex abuse in a school locker room in 2000.

The report also singled out the revered Penn State football program for criticism. It says Paterno and university leaders allowed Sandusky to retire in 1999, "not as a suspected child predator, but as a valued member of the Penn State football legacy, with future 'visibility' at Penn State,'" allowing him to groom victims.

Investigators, however, found no evidence linking his $168,000 retirement package in 1999 to the 1998 police investigation. Freeh called the payout unprecedented but said there was no evidence it was an attempt to buy Sandusky's silence.

In 2001, Mike McQueary, a graduate assistant, told Paterno he saw Sandusky with a young boy in the football team shower. Paterno, in turn, alerted Curley, who investigated the report along with Schultz. Curley and Schultz ultimately decided not to alert law enforcement or child welfare authorities.

Curley, who's on leave, and the now-retired Schultz, are awaiting trial on charges they lied to a grand jury investigating Sandusky and failed to report the McQueary complaint to civil authorities as required.

At left, watch how the Freeh report could impact future criminal or civil litigation surrounding the Sandusky sex abuse case.

Curley and Schultz declined to be interviewed by the investigators on the advice of counsel, according to the report. They stated through their attorneys that the "humane" thing to do in response to the incident McQueary witnessed was to "carefully and responsibly assess the best way to handle vague but troubling allegations," according to the report.

The report found that Curley, Schultz and Spanier initially planned to report the 2001 shower incident to the state Department of Public Welfare only to back off after Curley had a conversation with Paterno. The three officials then agreed to tell Sandusky "we feel there is a problem" and offer him "professional help." The officials also agreed to report Sandusky if he didn't cooperate.

"I didn't know exactly how to handle it and I was afraid to do something that might jeopardize what the university procedure was," Paterno told The Washington Post after the scandal broke, according to the report. "So I backed away and turned it over to some other people, people I thought would have a little more expertise than I did. It didn't work out that way."

More than 430 current or former school employees were interviewed since November, including nearly everyone associated with the football program under Paterno. The Hall of Fame coach died of lung cancer in January at age 85, two months after being fired as coach following Sandusky's arrest, without telling Freeh's team his account of what happened.

The report concluded that "in order to avoid the consequences of bad publicity," Curley, Paterno, Schultz and Spanier "repeatedly concealed critical facts related to Sandusky's child abuse" from the authorities.

"Although concern to treat the child abuser humanely was expressly stated, no such sentiments were ever expressed by them for Sandusky's victims," the report says.

Lawyers for several of the victims said the report showed that Penn State officials knew of the abuse "but made the deliberate and reprehensible decision to conceal his abuse. They chose to protect themselves, Penn State's brand and image, and their football program instead of children."

"We intend to demonstrate that Penn State and The Second Mile were aware of the abuse decades earlier and failed to take action to stop it," Andrew Shubin and Justine Andronici, who represent Victims 3, 7, 10 and also Sandusky's adopted son, Matt, said in a statement.

Trustee Anthony Lubrano, a critic of the board's dismissal of Paterno in November, said the board was still formulating a response.

Paterno's family released a statement in response to the report, calling Sandusky "a great deceiver" who "fooled everyone."

"Joe Paterno wasn't perfect," the statement says. "He made mistakes and he regretted them. He is still the only leader to step forward and say that with the benefit of hindsight he wished he had done more. To think, however, that he would have protected Jerry Sandusky to avoid bad publicity is simply not realistic. If Joe Paterno had understood what Sandusky was, a fear of bad publicity would not have factored into his actions."

The statement is the latest to come from the family in a week where they conducted damage control. On Wednesday, the family released a document, purportedly a future op-ed column written by Paterno less than a month before his death. In the piece, he defends the football program's integrity and rejects the notion that Sandusky's sexual abuse of boys amounted to a "football scandal" or in any way tarnished the accomplishments of his players or Penn State's reputation as a whole.

The Paterno family said the letter was given in draft form to a few former players around December. One of the ex-players circulated it to other former players this week.

"Over and over again, I have heard Penn State officials decrying the influence of football and have heard such ignorant comments like Penn State will no longer be a 'football factory' and we are going to 'start' focusing on integrity in athletics," Paterno wrote. "These statements are simply unsupported by the five decades of evidence to the contrary -- and succeed only in unfairly besmirching both a great university and the players and alumni of the football program who have given of themselves to help make it great."

Paterno also wrote, "This is not a football scandal and should not be treated as one."

From the moment the sex scandal broke back in November, the specter of a cover-up by high-ranking university officials hung over Happy Valley like a shroud, CBS News chief investigative correspondent Armen Keteyian reports. In response, the board of trustees hired Freeh, who promised to conduct "a thorough, fair, comprehensive" investigation "without fear or favor."

The board has already acted on five initial recommendations made by Freeh, including revising its policy overseeing the treatment of minors, Keteyian reports.

Sandusky was convicted on 45 criminal counts last month at a trial that included gut-wrenching testimony from eight young men who said he abused them as boys. By contrast, the Freeh report focused on Penn State.

After a 50-minute meeting in Harrisburg with the judge overseeing their case, Schultz's lawyer said Wednesday he won't be among those who call up the Freeh report the minute it is posted.

"I don't expect I'll be reading it for a while," said Pittsburgh attorney Tom Farrell. "I've got other things to do."

With the report now complete, the NCAA said Penn State now must address four key questions concerning "institutional control and ethics policies," as outlined in a letter sent to the school last fall.

"Penn State's response to the letter will inform our next steps, including whether or not to take further action," said Bob Williams, the NCAA's vice president of communications. "We expect Penn State's continued cooperation in our examination of these issues."

The U.S. Department of Education is examining whether the school violated the Clery Act, which requires reporting of certain crimes on campus, including ones of a sexual nature. The report said Penn State's "awareness and interest" in Clery Act compliance was "significantly lacking."

Only one form used to report such crimes was completed on campus from 2007 through 2011, according to the Freeh findings. And no record exists of Paterno, Curley or assistant coach Mike McQueary reporting that McQueary saw Sandusky in a shower with a boy in 2001, as they would be obligated to do under the Clery Act.

As of last November, Penn State's policies for Clery compliance were still in draft form and had not been implemented, the report found.

U.S. Department of Education said it was still examining whether Penn State violated the Clery Act, but declined to comment on Freeh's report.

Mary Krupa, an 18-year-old Penn State freshman who grew up in State College, said the conclusion that the school's highest officials were derelict in protecting children didn't shake her love of the town or the school.

"The actions of five or six people don't reflect on the hundreds of thousands" of students and faculty who make up the Penn State community, she said while walking through the student union building on campus.

Freeh said he regretted the damage the findings would do to Paterno's "terrific legacy" but there was no attempt to pin the blame on the late coach.

"What my report says is what the evidence and the facts show," he said.

Christian Beveridge, a masonry worker who grew up near Penn State, said the findings will ruin Paterno's legacy but not the closeness that people in town and fans feel for him.

"He built this town," said Beveridge, 40, resting in the shade on campus during a break. "All of his victories, he'll be remembered by everyone in town for a long time, but there will be that hesitation."