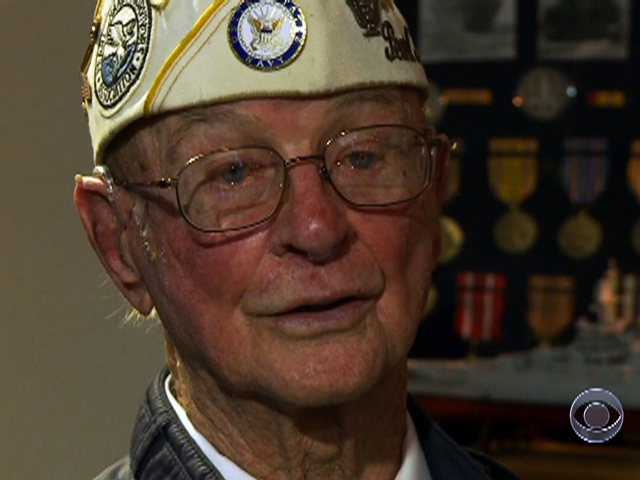 UNION CITY, N.J. - It was 70 years ago today that Japan attacked Pearl Harbor. The anniversary was observed near the memorial to the USS Arizona, one of 12 ships sunk on that day of infamy. About 120 survivors attended.

"I still see the planes," Manoney said. "I still see everything, and to see those bodies, that's, that's no good."

"My ship was an inferno. Four decks all the way up to the boat deck were on fire," he said.

In a faded photo, a Japanese bomber is seen diving into Mahoney's ship, the USS Curtis. "He plunged right into our boat deck from 10,000 feet," Mahoney said. Then came a 500 pound bomb.

"They said all hands stand by to abandon ship, but us sailors, kids we were, we ignored them and we stayed at our fire stations," Mahoney said. On the USS Curtis that day, 29 were killed, 59 were wounded and two missing.

That was just the first day of a war which Tom Mahoney -- except for one ten day leave -- fought every day of -- and recorded in his diaries. He was all over the South Pacific: Fiji, Pango Pango, Christmas Island, Wake Island, Midway Island and Corrigador.

He transferred to the Destroyer O'Bannon, which fought its way north toward the Japanese home islands. Of the 15 ships in his squadron, only the O'Bannon and two others were still in action when the atom bomb fell on Hiroshima.

Mahoney said that for the first time the crew felt they might actually survive the war. "No one yelled, screamed or anything. We just sit there and cried like babies and I mean we bawled," he said

With Mahoney still aboard, the O'Bannon escorted the Battleship Missouri into Tokyo Bay for the surrender ceremony. There are only a few more diary entries after that. One read, "Sept. 14, 1945 - the war is over."

After arriving back in the United States after the war, Mahoney married Claire, and they've been together for 65 years.

But every December the nightmares come back. "If you saw what I saw at Pearl Harbor, your friends mutilated and nothing but ashes, it stays with you."

Pearl Harbor will always stay in the history books but with the passing of Tom Mahoney's generation it will no longer be part of our living history.