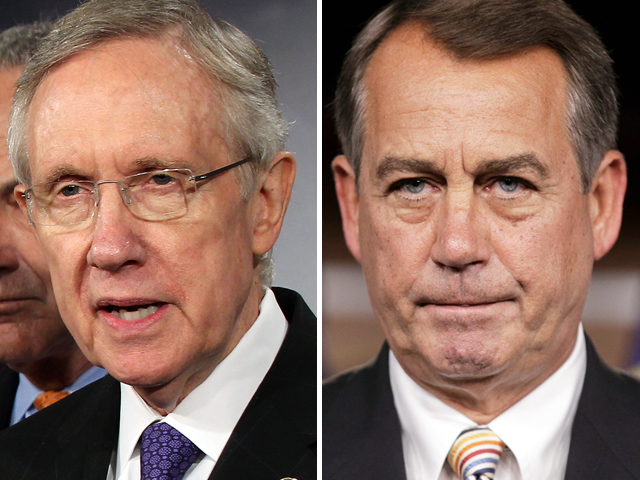 Both the House and the Senate on Friday passed a two-month extension of the payroll tax, bringing an end to the political brinkmanship that delayed progress on the popular bill for weeks.

The bill passed is similar to the bill the Senate passed last week -- it will prevent a 2 percent increase in the payroll tax, extend unemployment benefits and prevent doctors from taking a cut in Medicare payments. House Republicans initially opposed the two-month extension -- arguing in favor of a full, one-year extension -- but after taking a political beating for holding up the bill, they struck a deal on Thursday to accept the Senate bill with added language to benefit small businesses.

"I hope this Congress has had a very good learning experience," Senate Majority Leader Harry Reid said after today's vote. "Everything we do around here does not have to wind up in a fight."

Shortly after the bill passed, President Obama signed it into law, freeing him to join his family in Hawaii for Christmas.

In remarks delivered at the White House after he signed the bill, Mr. Obama commended Congress for breaking the stalemate "just in the nick of time for the holidays," but he urged Congress to pass a full, one-year extension "without drama, without delay."

Extending the payroll tax cut will give Americans more money to spend, which will boost the economy, Mr. Obama said -- "a boost we very much need right now."

Republicans and Democrats now have two months to work out their differences over a longer-term payroll tax cut extension -- namely, differences over how to pay for it. Reid today said Congress "can pay for it in many different ways" but will have to be "somewhat inventive."

Reid announced the four Democratic senators he is appointing to a conference to negotiate the terms of the longer-term bill with the House: Sens. Ben Cardin on Maryland, Bob Casey of Pennsylvania, Max Baucus of Montana and Jack Reed of Rhode Island.

Friday's votes -- which could have been derailed by any one member objecting to the unanimous vote -- were conducted in nearly-empty congressional chambers.

Had Congress failed to act, some 160 million Americans would have seen the payroll tax, which funds Social Security, increase from 4.2 percent to 6.2 percent. That increase would have meant a typical family making $50,000 a year would have lost about $40 from each paycheck. The White House launched an aggressive campaign using that piece of trivia to drum up public support for extending the tax cut, asking citizens in an email, "What Does $40 Mean to You?"

Though House Republicans ultimately relented to the Senate on this issue, they won some significant concessions in the overall fight. For instance, the two-month extension includes a provision requiring President Obama to make a quick decision on whether or not to approve the controversial Keystone XL oil pipeline. Environmentalists adamantly oppose the transcontinental pipeline, and the president had intended to put off the decision until after the 2012 election.

The temporary extension passed in spite of continued grumblings from some Tea Party Republicans. "It seems the politics of demagoguery have won over policy and principle with the concession to enact tax policy on two-month basis," Republican Rep. Allen West of Florida said in a statement on Facebook. "This is a sad day for America and further evidences our continuing decline."

In his remarks today, Reid thanked Senate Republican leader Mitch McConnell for sticking to the compromise agreement Republicans and Democrats reached in the Senate, even after the House initially rejected the Senate's two-month extension. He also chided freshmen House Republicans for keeping up their objections to the bill.

"People wonder why the approval rating of this Congress is so low -- I don't wonder," he said. "Everything we've done this Congress has been a knock-down, drag-out fight."

What Biden's new travel restrictions mean for you
Stephanie Condon