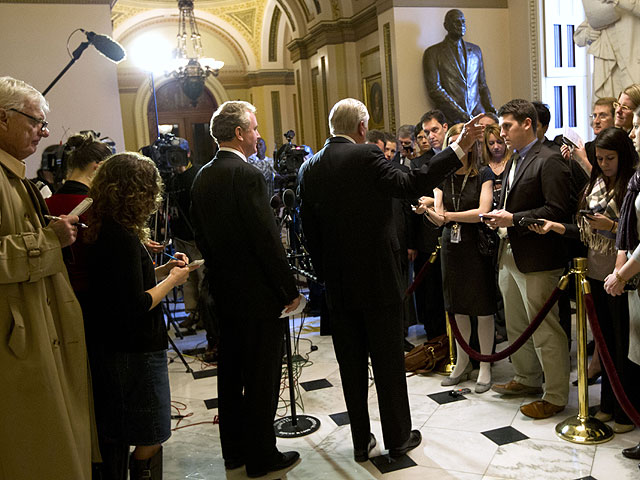 Congressional leadership has reached a tentative agreement over a deal on language for extending a payroll tax cut extension, multiple sources have confirmed to CBS News.

According to a House GOP aide, the House would accept a new bill reflecting the two-month extension previously passed in the Senate, but would add language protecting small businesses from costly new reporting requirements in the Senate bill. Senate Majority Leader Harry Reid, D-Nev., will appoint conferees to work with Republicans in the coming weeks on a year-long extension of the tax cuts if the deal comes to fruition.

The agreement, however, is pending a House Republican conference call, scheduled to take place at 5 p.m. ET on Thursday. In that call, House members must sign off on the deal.

House Speaker John Boehner met with House conferees and Rep. Eric Cantor, R-Va., Thursday afternoon, and they gave the speaker their blessing for him to reach an immediate resolution with Reid.

This afternoon, Boehner informed House leaders over the phone that he intended to reach out to Reid for a possible deal, and proceeded with steps aimed at setting up the conference call with House Republicans.

Reid accepted Boehner's proposal, and the House is scheduled to be in pro forma session at 10 a.m. Friday -- which means the House could pass it by unanimous consent if House Republican members don't balk at the proposal.

President Obama on Thursday continued to campaign on behalf of a short-term extension of the tax cut, blasting House Republicans for holding up a Senate-passed bill and wondering, "Has this place become so dysfunctional that even when people agree to things we can't do it?"

"It doesn't make any sense," he told reporters in a press conference. "Enough is enough."

House Republicans had argued that the Senate bill - which was negotiated in a bipartisan effort by leaders Mitch McConnell, R-Ky., and Harry Reid, D-Nev., and which sailed through the chamber last weekend with broad bipartisan support - is a short-term fix for a long-term problem.

As late as Thursday morning, Boehner appeared to be sticking to his guns on the matter, even while fellow Republican McConnell urged House lawmakers to pass the Senate bill.

"Everybody has already agreed that the best policy is a one-year extension," Boehner told reporters on Capitol Hill. The speaker instead called on Democrats to appoint lawmakers to work with the Republicans to hammer out differences between a House bill and the Senate bill.

Mr. Obama, however, pointed to House Republicans' refusal to yield as an exemplification of Washington's problems.