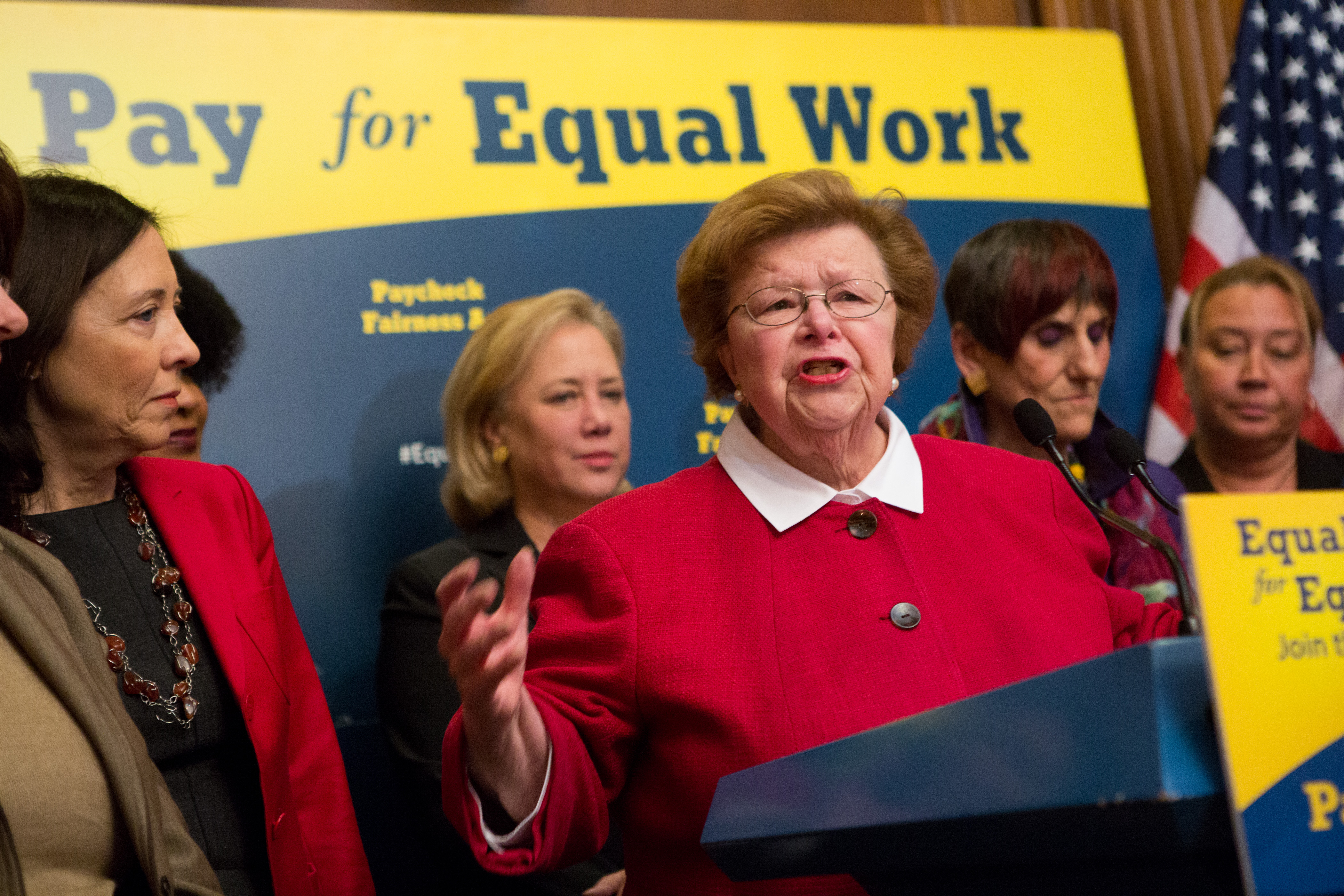 Democrats' push for a bill they say would help close the gender wage gap lasted all of a day before it was shot down in the Senate.

Republicans joined together Wednesday to block the Paycheck Fairness Act, ignoring Democratic warnings that they would suffer at the ballot box this November. The bill, sponsored by Sen. Barbara Mikulski, D-Md., closely mirrors two executive orders signed by President Obama Tuesday: it would have barred employers from retaliating against employees who discuss their salaries, and given businesses only a small list of reasons they can legally cite for paying women less than men. It also would have made it easier for women who feel they have faced discrimination to being class-action lawsuits against their employers.

Mr. Obama's executive order, in coordination with Senate Democrats, bars federal contractors from retaliating against employees who discuss their salaries and mandates that the Labor Department collect data on compensation, organized by race and sex.

In addition to the Senate Republicans, Maine Sen. Angus King, an independent, voted no. Majority Leader Harry Reid, D-Nev., also changed his vote to a no at the last minute, which will allow him to bring up the bill again in the future.

Republicans say the bill wouldn't do anything to help women, and the Democrats are just offering it for show. In particular, they have warned that the provisions relating to class-action lawsuits will become little more than a "giveaway" to trial lawyers, in the words of Sen. Kelly Ayotte, R-N.H.

On the Senate floor Wednesday morning, Minority Leader Mitch McConnell, R-Ky., argued that the economy during the Obama presidency has taken a far worse toll on women than any employment discrimination might have.

"That's the story Senate Democrats don't want to talk about. Perhaps that's why for weeks now they blocked the efforts Republicans have made to improve the picture," he said. "It would appear, as some have put it, that they have no interest in solutions or any concern for the consequences for their actions."

But the Republicans were also prepared with their own alternative to the Democratic legislation. On Tuesday, McConnell left the white, male leadership of the Senate Republicans out of a weekly press conference and instead brought Sen. Deb Fischer, R-Neb., to outline her amendment to the Democrats' bill.

Fischer also has a non-retaliation clause in her amendment, but also pushes for enforcement of current laws banning gender-based discrimination in pay by ensuring that employers notify employees of their rights. She would also consolidate job-training programs to eliminate duplicative or ineffective ones.

Other Republican lawmakers planned to offer measures that they say would boost job creation, such as a proposal from Sen. Susan Collins, R-Maine, to said Tuesday. He said that Democrats would bring up the bill again and again to continue to force Republicans to justify their opposition.

"Though we lost the vote, we refuse to lose the battle. We are going to continue the fight to get equal pay for equal work," Mikulski said after the bill failed. "For the women, put your lipstick on, and let's fight on."

A few hours after the vote, Mr. Obama added to Democratic criticism of the GOP.

"Republicans in Congress continue to oppose serious efforts to create jobs, grow the economy, and level the playing field for working families. That's wrong, and it's harmful for our national efforts to rebuild an economy that gives every American who works hard a fair shot to get ahead," he said in a statement.