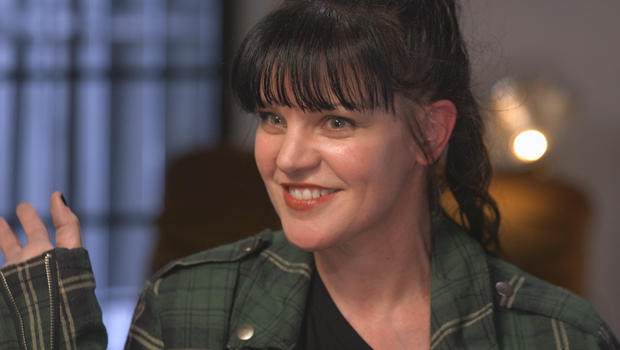 For her fans, it's no mystery why Pauley Perrette is a star in the hit series "NCIS." What they may find a bit mysterious is why she's decided to walk away. Tracy Smith has our Sunday Profile:

She's the forensic scientist with the neck tattoo. Actress Pauley Perrette's goth-girl character Abby Sciuto on "NCIS" is one of the best-loved crimefighters on TV.

But now, Perrette's decided to leave the show — Perette bows out in an episode airing on Tuesday May 8 — and after 15 years, she's having a tough time letting go.

"It makes me sad to imagine a world without Abby in it," she said. "It really makes me sad."

"Did you go through that whole grieving process?" Smith asked.

"I'm still grieving. And it's sad. I, like, usually cry in my car every single day when I drive to work. And I usually cry on my way home at some point. And then I take a deep breath, and I go, 'All right,' you know?"

As a character, Abby really is something of an institution -- a young female scientist who's often the smartest person in the room. "Abby made science cool and attainable for young women," Perrette said. "And this television character did more than encourage it. It made it cool. It made it exciting. It made it fun."

She also looks fun, with her raven braids and body art. Of course, not much of it is real; Turns out Pauley Perrette is actually a natural blonde, so the black hair comes from a bottle. ("I end up with blonde roots!" she said.)

And the famous neck tattoo is a fake, carefully applied in the makeup trailer before every taping.

Abby's all fiction. But Perrette herself nearly became a crimefighter for real.

Growing up in Alabama, young Pauley was fascinated by police work. She studied criminal science in college, and then moved to New York City to finish her master's degree.

Smith asked, "So, you're headed down this criminal science path, and bartending to put yourself through school? What happened?"

Did he ever: Before long, Perrette was doing commercials of her own, like this Sprint ad:

She played a DJ opposite the late Philip Seymour Hoffman in 2000's "Almost Famous":

And three years later, she took her place in the "NCIS" lab, black bangs and all.

She says she's always loved the job, but not the spotlight that goes with it. So Perrette -- who's now divorced -- spends a lot of her free time at her Hollywood home with her four-legged companions.

Smith asked, "What is it about the fame that bothers you?"

"It's being a commodity," Perrette said. "It's just very dehumanizing. I hope I'm not wrong, but I think that I have earned a little bit of time to myself. Just stay home. Go to church."

"What about a love life?"

"And you've been happier since you figured that out?"

She wasn't kidding about going to church, either. Perrette is a regular at Hollywood United Methodist. But her celebrity can sometimes be a problem.

Of course that celebrity thing cuts both ways: Pauley Perrette has been able to speak out on a number of causes.  She wrote the song, "Beautiful Child," for suicide prevention among LGBT kids:

By her own count she's supported more than two dozen charities, personally and financially.

Smith asked, "Do you have any sense of how much money you've given away?"

"There's no telling," Perrette replied. "I have a business manager that handles all of my money. Unlike any other client he has, I'm not allowed to have my money, because I'll just give it away."

For instance, she's created a scholarship for girls who want to follow in Abby's footsteps: "In honor of Abby, and in honor of young women that want to pursue science and math and forensics."

So, in that sense, Abby lives forever? "That's the way I thought of it, yeah."

But you might say her "pet" charity is the Amanda Foundation, a non-profit animal rescue place in Beverly Hills.

"Like, my dogs are my happiness," Perrette said. "They're my reason for living."

"Is that true?" Smith asked.

"They're so totally my kids! My whole life is about them. Everybody's, like, 'Hey, you wanna gonna out?' And I'm, like, 'No.' 'Cause that would take me away from my dogs!"

Pauley Perrette knows what makes her happy right now. What comes next is still a mystery.

"I have a feeling there'll be more out there," Smith said.

"So, it's figuring out what the right one is?"

"I'm being offered a lot. There's a lot of conversations going on, yeah. And there's me sittin' at home on the couch, drinkin' beer with my dogs. And I'm really good at it!"