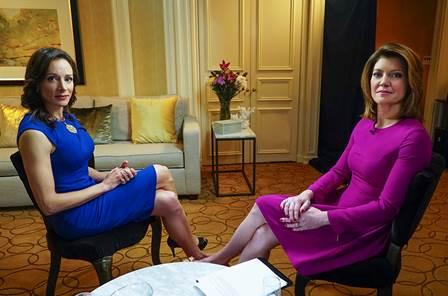 The woman whose affair with David Petraeus ended his career as CIA director has a message: She also deserves a second chance.

“I need to fight back for my life,” she told CBS News’ Norah O’Donnell in an interview that will air Thursday on “CBS This Morning.”

In the first national television interview she’s given since news broke in 2012 of her relationship with Petraeus, Broadwell talked with CBS News’ Norah O’Donnell about how she continues to suffer privately and publicly, while Petraeus has largely been redeemed in the public eye.

Broadwell says the U.S. military recently reprimanded her for her role in the case. She only learned of the disciplinary action just before Thanksgiving -- 10 months after the Army and Defense Secretary Ash Carter recommended no additional action against Petraeus.

“I’m really just asking on principle to be treated with dignity and also to be treated by the same standard with the military. And to be able to move forward and not have this sort of potential cancer hanging over my head,” Broadwell said. “I mean, it’s really been what it’s like for the last five years, thinking and living with cancer, and I don’t know if it’s going to metastasize and get worse or will it go away. It’s probably a very poor analogy, but when you don’t know -- when there’s uncertainty, constant uncertainty, it’s -- it’s kind of soul-eating.”

The affair was revealed when the FBI inadvertently found emails between the two during another investigation. Subsequently, Petraeus admitted that he had removed classified information that he turned over to Broadwell, who was at the time writing an authorized biography of him. Last year, after agreeing to a guilty plea, Petraeus was sentenced to two years’ probation and fined $100,000.

Since the scandal, Petraeus, whose military and political acumen is widely respected, has seen his stock rise -- to the point that he has been among the top candidates considered for secretary of state.

Meanwhile, Broadwell, who is a major in the Army reserves, says she’s still waiting for the Army to approve her resignation, which she requested over the summer. She told O’Donnell she’s upset with what she perceives as a double-standard.  And she also tweeted Tuesday that she’s determined to “set the record straight on a few things.”

And if anyone’s interested, she has an idea of the job she wants, too.