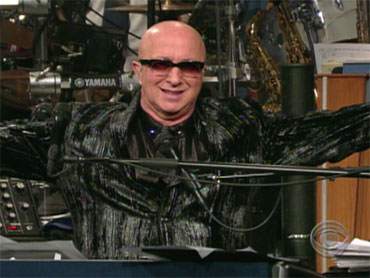 America knows Paul Shaffer as the bandleader on "The Late Show with David Letterman" - a show that has been much in the news this week after David Letterman's on-air admission of sexual affairs with co-workers and the arrest of a CBS News producer for an alleged extortion plot. But all that was still a few days in the future when Paul Shaffer and his boss talked with CBS News correspondent Anthony Mason for this Sunday Profile.


For 27 television seasons now and through more than 5,000 shows, Paul Shaffer has been the musical maestro, comedic foil and sidekick for David Letterman.

He is the piano-playing Tonto to Letterman's Lone Ranger, a job that Letterman says is very important.

"Paul is essential," Letterman said. "It's a long trip, and Paul is the funny flight attendant."

From behind a fortress of synthesizers, Shaffer leads the CBS Orchestra, an eight-piece band revered for its tightness and versatility. He has to add the melody as Letterman sets the tune, which means keeping an eye on the host throughout the show and reacting to his moves.

"God help me if I take my eyes off him," Shaffer said.

In a rare interview after a show early last week, and before Thursday night's revelations, Letterman talked about their partnership.

"It's not considered. It's not conjured. It's just more or less reflexive," Letterman explained.

Shaffer outfits his kitschy-cool Vegas persona in his dressing room on the third floor of the Ed Sullivan Theater. 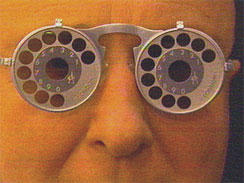 (CBS)
The band leader has amassed a collection of glasses over the years, keeping an eye out for a new pair wherever he goes.

He has so many by now that he's lost track of how many he owns.

"I said if I'm gonna entertain, I better look like an entertainer," Shaffer said.

In his new book, "We'll Be Here for the Rest of Our Lives," the second banana tells the story of his swingin' showbiz life.

"I don't know why this concept of what is hip became so important to me. But I, of course, I'd kind of send it up with this hipster persona," Shaffer said, adding that the persona is part real and part fake.

Shaffer's journey started in Thunder Bay, Ontario, where he's a local hero. There is a street named after him, and the first star on Thunder Bay's "Walk of Fame" has his name on it.

Even the police stop to ask him for an autograph.

He bought his first organ at Coran's Music Centre, where he used to spend a lot of his time, dreaming about owning the instruments he couldn't afford.

The Shaffer family lived on Selkirk Street, where Paul played the organ at his parents' go-go party in the Sixties.

"Played all night. At two in the morning, I go to my mother and said 'Can I go to bed now?' She says 'Just one more set, dear,'" Shaffer recalled.

Paul was the only child of Bernard Shaffer, a prominent attorney, and Shirley. He started music lessons when he was six years old.

"Right after my first lesson, I started to be able to figure out melodies myself by ear. And then chords and harmonies by ear," Shaffer said. "And all I liked to do was play songs, figure them out and play them. It was like unlocking some sort of magical kingdom."

Shaffer's big break came in 1972, when he played piano for a friend who was auditioning for the Toronto production of the musical "Godspell" and the show's composer, Stephen Schwartz.

"Stephen Schwartz just said, 'I've never heard anyone pound a piano like that,' and made him musical director," said actor Martin Short, who also won a part that day, and who has been Shaffer's friend ever since.

"A lot of people came in, Gilda Radner got up on stage, pigtails to the side and sang "Zippity Doo Da," and I thought, 'Oh, that poor thing. Look at her.' And they said, 'you're hired,'" Short remembered.

The cast also included Eugene Levy, Dave Thomas and Andrea Martin. Shaffer says he learned a lot just from hanging around people like them. Those connections helped bring Shaffer to New York, and to a new late night TV show called "Saturday Night Live," where he started out as the band's piano player and cocktail accompanist for Bill Murray's lizardly lounge singer:

But soon Shaffer began appearing in sketches. He was best known for his impression of the painfully stiff rock producer Don Kirshner.

When the "Blues Brothers" skit became a smash hit, Dan Aykroyd and John Belushi asked Shaffer to be the musical director for their records. But just as their movie was about to start shooting, Gilda Radner asked Shaffer to produce a record for her.

"And John said to me, 'Don't do Gilda's record. Just rest,'" Shaffer said. But he couldn't turn down Radner, a close friend. "There was friendly competition going on and everybody wanted the best for their own project. And I just said, 'John, I'll be able to do both.'"

But he was wrong. When Radner's record took longer than expected, Belushi pushed Shaffer off the Blues Brothers film.

"John put out sort of a statement among our group of 'Saturday Night Live' people saying Paul is out. Forget it. He is not a Blues Brother. He will never be a Blues Brother. And this was shattering to me. Oh my goodness, I was just shattered," Shaffer explained. 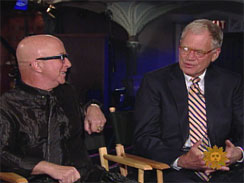 Shaffer was the only person they talked to.

The relationship grew organically from there.

Off the air, the cool cat becomes a family man. Shaffer has two kids with his wife, Cathy, a former booker for the Letterman show. Will and Victoria Shaffer describe their dad as "a character," albeit a loud one.

Letterman says he and Shaffer have become very close friends over the years.

"That's another surprising thing from the relationship that began all those years ago. I knew he was great musically. I didn't know he was so funny. And I didn't realize he would become one of my best friends," Letterman said.

The late night host describes his sidekick as easy to like, and says their friendship has grown in part because they are two of a few number of people who do what they do for a living.

Shaffer, who will be 60 in November, has brushed up against almost all the greats he's idolized.

"I think I've done it, you know?" Shaffer said. "I missed Elvis. I missed Sinatra. But otherwise, I did pretty well."

For more info:
"We'll Be Here for the Rest of Our Lives: A Swingin' Show-biz Saga" by Paul Shaffer and David Ritz (Random House)
"The Late Show with David Letterman"

Taking a flying car for a test drive
Anthony Mason