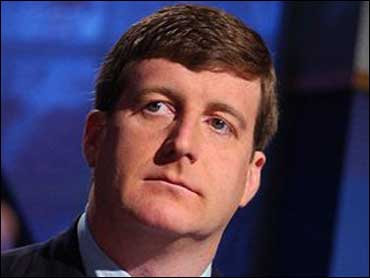 It wasn't alcohol, said Rep. Patrick Kennedy, in the first of two statements issued to explain an accident in which he crashed his car into a security barricade near the U.S. Capitol.

"I consumed no alcohol prior to the incident," said Kennedy, commenting on reports that he appeared to be staggering when he emerged from his green Mustang convertible at about 2:45 a.m. Thursday – insisting that he was late for a vote in the House.

That statement left many reporters with further questions about the incident and the way it was handled by police. Late Thursday night, the 38-year-old Rhode Island Democrat – son of Massachusetts Democratic Sen. Edward Kennedy – decided to release more details.

Patrick Kennedy says several hours before the accident, he had taken two prescription drugs prescribed by the attending physician of the U.S. Congress: Phenergan, to treat gastroenteritis, and Ambien, a sleeping pill.

"Following the last series of votes on Wednesday evening, I returned to my home on Capitol Hill and took the prescribed amount of Phenergan and Ambien," said Kennedy. "Some time around 2:45 a.m., I drove the few blocks to the Capitol Complex believing I needed to vote. Apparently, I was disoriented from the medication."

"At no time before the incident did I consume any alcohol," said Kennedy, going on to address questions about why he was not asked to take a sobriety test. "At the time of the accident, I was instructed to park my car and was driven home by the United States Capitol Police. At no time did I ask for any special consideration, I simply complied with what the officers asked me to do."

"I have the utmost respect for the United States Capitol Police and the job they do to keep Members of Congress and the Capitol Complex safe," he continued. "I have contacted the Chief of Capitol Police and offered to meet with police representatives at their earliest convenience as I intend to cooperate fully with any investigation they choose to undertake."

Kennedy says he now knows that Phenergan can cause drowsiness and sedation.

Ambien, a widely-prescribed sleep medication, has been blamed by many individuals for incidents involving driving, eating, cooking and other actions that happened when the patients were supposed to be asleep – actions they later said they could not remember.

Authorities investigating some of those incidents have said that blood tests prove the individuals involved did not follow instructions on how to take the drug – including dosage amounts and the need to set aside enough time for a full night's sleep after taking the drug.

Patrick Kennedy says his car – which has a broken headlight and is somewhat banged up - was the only one involved in the accident.

As reporters staked out Kennedy's office late Thursday, hoping for more answers, the congressman's chief of staff, Sean Richardson, emerged and made a point of saying that while Capitol Hill police were ready to kick out the reporters, Kennedy's office called off the cops, telling them the media was welcome to stay.

The statement mentioning Phenergan and Ambien was issued a short time later.

The report that Kennedy appeared to be intoxicated at the time of the crash came from Louis P. Cannon, president of the Washington chapter of the Fraternal Order of Police, who wasn't there but says officers at the scene were instructed by an official "above the rank of patrolman" to take Kennedy home.

A letter written by Capitol Police officer Greg Baird to Acting Chief Christopher McGaffin said Kennedy appeared to be staggering when he left the vehicle after the crash about 3 a.m. The letter was first reported by Roll Call, a Capitol Hill newspaper.

Capitol Police, who are investigating the incident, were at first circumspect and said nothing about Kennedy, stating only that they were investigating an early morning traffic violation.

Baird wrote McGaffin that two sergeants who responded to the accident conferred with the watch commander and were ordered to leave the scene.

He said that after the officers left, Capitol Police officials gave Kennedy a ride home.

Cannon says police, depending on the cirumstances do sometime take people to their homes but he believes "because of who he is, courtesies were extended... It it had been you or me, we would have left in handcuffs."

Kennedy spent time at a drug rehabilitation clinic before he went to Providence College. He has been open about mental health issues, including being diagnosed with bipolar disorder.

He has served in Congress since 1994, and was the youngest member of his family – the best-known of America's political dynasties – to win elective office, beginning his legislative career at age 21 in the Rhode Island Assembly.

House passes bill to crack down on alleged gas price gouging
Thanks for reading CBS NEWS.
Create your free account or log in
for more features.
View CBS News In
CBS News App Open
Chrome Safari Continue
Be the first to know
Get browser notifications for breaking news, live events, and exclusive reporting.