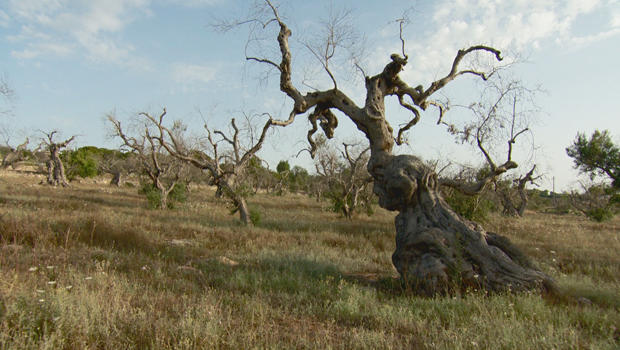 Olive trees don't just dot the landscape in Puglia, Italy; they define it.  They are so important here, in the heel of Italy's boot, that locals use words like "patrimony" and "cultural heritage" when describing them. But what is worrying olive growers here is a disease that's killing olive trees by the millions.

Paul Cappelli, who'd been an advertising executive in New York City until a few years ago, left his job and moved to a home on the ancient Appian Way surrounded by olive trees, and entered the oil business. "Not the Texas oil business; I'm in the real oil business!" he said.

Today, Villa Cappelli produces about 10,000 liters of olive oil, 95 percent of it sold in the U.S.

"It's a dream come true, with a nightmare behind me," he said.

"That's what it feels like, a nightmare?" asked correspondent Seth Doane.

Just a few hours' drive south of Cappelli's olive grove, in a part of Puglia called Salento, an Italian government scientist, Pierfederico La Notte, is trying to stop the spread of this disease called xylella fastidiosa.

The European Commission considers the plant bacteria one of the most dangerous in the world. It's carried from tree to tree by a little bug. Oil from an infected tree is still safe to consume, but the tree soon dries up, and is no longer able to produce olives.

"This epidemic has the potential, if we couldn't stop it in time, to destroy completely the olive oil industry of this region," said La Notte.

More than a third of America's olive oil comes from Italy, and Puglia produces about 40 percent of all of Italy's oil.

Of the roughly 60-million olive trees in Puglia, more than 10 million are already infected, including some of the oldest.

La Notte blames globalization for spreading the pathogen, which was likely carried to Italy from Central America only about five years ago. That was the first time xylella was detected in Europe.

"Oh, a little bit of every factor that you mentioned," La Notte said. "The research moved immediately, but a lot of people couldn't believe at the beginning that a dangerous disease could appear and move so quickly on the territory."

Today, they're taking drastic measures. The government is testing trees and destroying the sick ones, chopping them down by the thousands, and burning the leaves to try to stop the spread of the disease.

Ottavio Vincenti, a 75-year-old former olive farmer, abandoned his trees, nearly 700 of them – his life's work.  "It hurts my heart," he told Doane. "My grandparents raised and cared for these trees. I can't even look at them anymore.

Scientists, including Maria Saponari in the regional capital of Bari, are trying to understand the disease and how it's spread.

Saponari showed Doane plants which have been inoculated with the bacterium to infect them, in order to monitor the plant's reactions. But she explained, in greenhouse conditions the incubation period of the disease can be about a year.

Scientists are also on the lookout for new, resistant varieties of the bacterium. And time may be running out. So, La Notte is trying to graft disease-resistant olive varieties onto infected trunks, to try to save some trees. "It's growing very, very well," he said.

Doane asked, "You say trying to stop this is a race against time? Is it a race that you're losing?"

"At the moment I have to say, yes," La Notte replied.

Paul Cappelli has tested his trees, and there's no sign of xylella – yet.  "It's like the Black Death is coming," he said. "It feels like if I look over my shoulder and I see dark clouds, it's the Bubonic Plague coming towards the town."