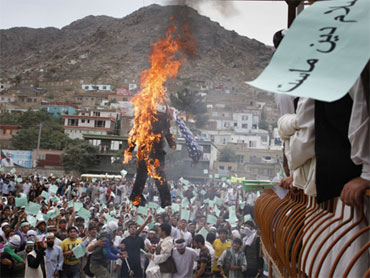 The top U.S. and NATO commander in Afghanistan warned Tuesday an American church's threat to burn copies of the Muslim holy book the Quran could endanger U.S. troops in the country and Americans worldwide.

"Images of the burning of a Quran would undoubtedly be used by extremists in Afghanistan - and around the world - to inflame public opinion and incite violence," Gen. David Petraeus said in an e-mail to The Associated Press.

His comments followed a protest Monday by hundreds of Afghans over the plans by Gainesville, Florida-based Dove World Outreach Center - a small evangelical Christian church that espouses anti-Islam philosophy - to burn copies of the Quran on church grounds to mark the Sept. 11, 2001 terrorist attacks on the United States that provoked the Afghan war.

Muslims consider the Quran to be the word of God and insist it be treated with the utmost respect, along with any printed material containing its verses or the name of Allah or the Prophet Muhammad. Any intentional damage or show of disrespect to the Quran is deeply offensive.

In 2005, 15 people died and scores were wounded in riots in Afghanistan sparked by a story in Newsweek magazine alleging interrogators at the U.S. detention center in Guantanamo Bay placed copies of the Quran in washrooms and flushed one down the toilet to get inmates to talk. Newsweek later retracted the story.

At Monday's protest, several hundred Afghans rallied outside a Kabul mosque, burning American flags and an effigy of Dove World's pastor and chanting "death to America." Members of the crowd briefly pelted a passing U.S. military convoy with stones, but were ordered to stop by rally organizers.

Two days earlier, thousands of Indonesian Muslims rallied outside the U.S. Embassy in Jakarta and in five other cities to protest the church's plans.

Petraeus warned images of burning Qurans could be used to incite anti-American sentiment similar to the pictures of prisoner abuse at Iraq's Abu Graib prison.

"I am very concerned by the potential repercussions of the possible (Quran) burning. Even the rumor that it might take place has sparked demonstrations such as the one that took place in Kabul yesterday," Petraeus said in his message. "Were the actual burning to take place, the safety of our soldiers and civilians would be put in jeopardy and accomplishment of the mission would be made more difficult."

The U.S. Embassy in Kabul also issued a statement condemning the church's plans, saying Washington was "deeply concerned about deliberate attempts to offend members of religious or ethnic groups."

Dove World Outreach Center, which made headlines last year after distributing T-shirts that said "Islam is of the Devil," has been denied a permit to set a bonfire but has vowed to proceed with the burning. The congregation's website estimates it has about 50 members, but the church has leveraged the Internet with a Facebook page and blog devoted to its Quran-burning plans.

A surge in troop deployments has brought the number of U.S. forces battling the Taliban insurgency in Afghanistan to about 100,000 and Petraeus is asking for 2,000 more soldiers to join the 140,000-strong international force here, NATO officials said Monday. It was unclear how many would be
Americans.

Coalition officials said nearly half will be trainers for the rapidly expanding Afghan security forces and will include troops trained to neutralize roadside bombs that have been responsible for about 60 percent of the 2,000 allied deaths in the nearly 9-year war.

The officials, who spoke on condition of anonymity because they were not supposed to talk about the issue with media, said the NATO-led command had been asking for the troops even before Gen. David Petraeus assumed command here in July.

Petraeus recently renewed that request with the NATO command in Brussels. The alliance has had trouble raising more troops for the war effort, with at least 450 training slots still unfilled after more than a year.

With casualties rising, the war has become deeply unpopular in many of NATO's 28-member countries, suggesting the additional forces will have to come from the United States. In Europe, polls show the majority of voters consider it an unnecessary drain on finances at a time of sharp cuts in public spending and other austerity measures.

Pool's bodyguard was also killed in the attack, and one militant died and two were wounded in the ensuing firefight with police, Haqmal said.