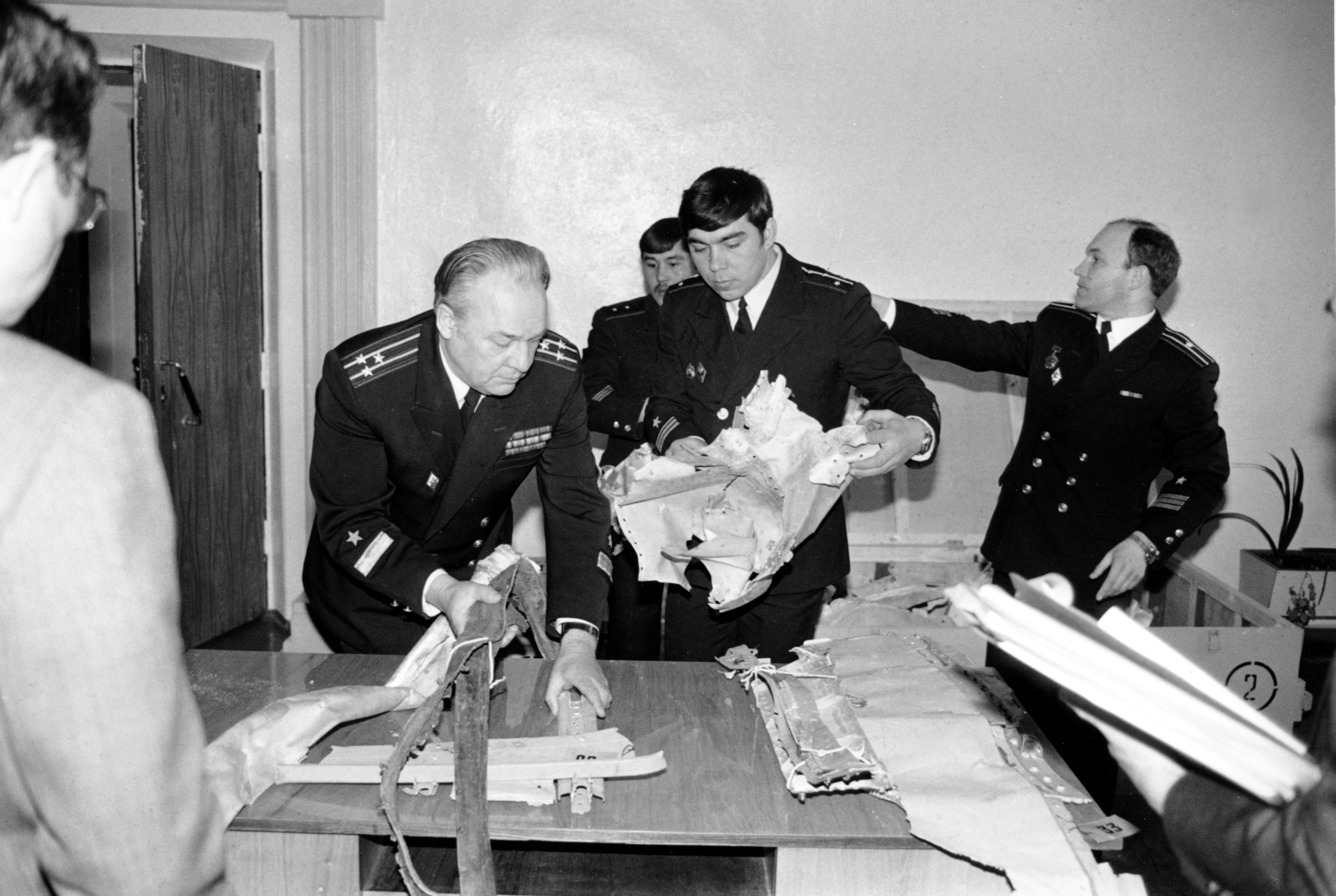 Pro-Russian separatists and Ukrainian government officials both deny responsibility in Thursday's crash of a Malaysia Airlines passenger plane carrying 295 people over eastern Ukraine. Government officials say the Boeing 777-200ER was shot down by a surface-to-air missile.

There is, sadly, a long history of commercial, civilian aircraft that have been shot down in and out of war zones.

During World War II, in 1940, a Finnish Junkers Ju 52 (a model which had seen service as both a civilian and military transport) was intercepted and shot down by Soviet bombers; nine people on board were killed.

In 1942 the Japanese shot down a KNILM Douglas DC-3, carrying war refugees from Java. The plane crashed in Australia; four of the 12 people on board died.

In 1943 British actor Leslie Howard was among the seven passengers killed when his BOAC flight from Portugal to England was shot down by the Germans.

During the 1950s, fighter planes from the People's Republic of China shot down a Cathay Pacific DC-4 flying from Bangkok to Hong Kong in 1954; 10 people were killed. And in 1955, an El Al Constellation strayed into Bulgarian air space on a flight from Vienna to Tel Aviv. Fifty-eight passengers and crew members were killed when it was shot down after refusing to land.

A sandstorm and mechanical problems combined to force a Boeing 727 flying from Tripoli to Cairo off-course, drifting east across the Suez Canal and over the Sinai Peninsula (then Israeli territory). Israeli interceptors were launched, and their pilots signaled to the Libyan plane to land; Flight 114's crew instead turned west.

The Israelis' cannon fire damaged the plane, forcing it to make an emergency landing in the desert. Out of 113 people on board, 108 died.

A Boeing 707 was ordered shot down after violating Soviet airspace. The damaged plane made an emergency landing on a frozen lake near the border of Finland. Only two of the 107 people on board died.

During the Rhodesian Bush War, guerrilla fighters used a surface-to-air missile to shoot down an Air Rhodesia plane shortly after the Russian-made Strela 2 airliner took off from Kariba. After the plane crashed and broke up into pieces, the guerrillas located 10 people who were still alive and executed them. Only eight people on board survived.

The following February, the same rebel group was responsible for another shoot-down of an Air Rhodesia Strela 2 airliner, Flight 827, which crashed near Lake Kariba. All 59 aboard were killed.

En route from New York City to Seoul via Anchorage, KAL Flight 007, a Boeing 747, deviated from its planned route shortly after takeoff from Alaska, possibly due to error in the setting of the autopilot control. The plane flew through air space normally off-limits to civilian aircraft, with the pilots unaware of the extent of their flight route's deviation.

Soviet defenses tracked the aircraft as it flew across the Kamchatka Peninsula -- into and then out of Russian air space. As the plane approached Sakhalin Island and re-entered Russian territory, three Soviet Su-15 fighters and a Mig-23 made visual contact with the Boeing. One fighter pilot fired warning shots.

As KAL 007 coincidentally climbed to conserve fuel, the Russian pilot mistook it as an attempt at evasive action. The Soviets' Combat Control Center gave orders to destroy the target before it exited Soviet air space again.

The fighter's missile struck KAL 007. The cabin experienced rapid decompression, and the plane arced upwards, reaching an altitude of more than 38,000 feet, before falling from the sky over Moneron Island.

All 269 people on board were killed.

International teams were not allowed within Soviet waters to search for KAL 007. Soviet divers located wreckage and some human remains off Moneron.

In an address to the nation, President Ronald Reagan said of the shoot-down, "This crime against humanity must never be forgotten, here or throughout the world."

It was not until the collapse of the U.S.S.R. that information from the flight data and voice recorders and transcripts of cockpit communications involving the fighter pilots became available. In 1992 Russian President Boris Yeltsin provided the government of South Korea with the recordings, which detailed the orders from military officials to target the aircraft.

Ten passengers and crew members were killed when a domestic civilian flight in Malawi ventured into Mozambique air space during that country's civil war and was shot down.

An August 1988 report from the Chairman of the Joint Chiefs of Staff called the shoot-down of an Iranian civilian airliner over the Persian Gulf by a U.S. guided missile cruiser "a tragic and regrettable accident," adding, "[A]s is so often the case in a combat environment, there were a number of contributing factors."

Those factors included the 1987 attack on the USS Stark during the Iran-Iraq War, by an Iraqi fighter jet whose pilot -- reportedly mistaking the U.S. warship for an Iranian oil tanker -- fired Exocet missiles at the Stark off the coast of Saudi Arabia, near the war zone. Thirty-seven American crew members were killed.

Other tensions in the waters off Iran, as well as reports of Iranian attempts to improve their ability to attack American ships, led to a change in the rules of engagement with perceived or possible threats to U.S. assets. The day before the Iran Air incident, on July 2, the USS Halsey warned away a potentially threatening Iranian F-14.

At the same time, Iran Air Flight 655, an Airbus A300 B2-203, took off from a joint civilian/military air field in Bandar Abbas, destination Dubai. There were 290 people on board, including 16 crewmembers.

Bandar Abbas was the same air field from which Iranian F-4s were launched in support of attacks on U.S. Naval forces in April.

"It is hard to overemphasize the fact that Bandar Abbas is also a military airfield," the Joint Chiefs of Staff report said. "The Air Bus was probably not informed of the surface action taking place in the Strait. Informed or not, Flight 655 logically appeared to have a direct relationship to the ongoing surface engagement."

The Vincennes was tracking an Iranian P-3 military aircraft, flying approximately 60 nautical miles northwest, when it saw the unidentified aircraft, flying within a known commercial air corridor, with a transponder signal that appeared to identify the craft as an F-14. It did not respond to radio warnings.

With the plane's distance at nine miles and coming closer, descending to an altitude of 13,000 feet, it was deemed a threat to the Vincennes. Surface-to-air missiles were fired.

The 290 victims included Iranian nationals as well as citizens of the United Arab Emirates, India, Pakistan, Yugoslavia and Italy.

The Joint Chiefs Chairman's report states, "I believe that the actions of Iran were the proximate cause of this accident and would argue that Iran must bear the principal responsibility for the tragedy. . . . It was especially reprehensible to allow an airliner to take off from a joint 'military/civilian' airfield and fly directly into the midst of a gunfight. As for the aircraft itself, its failure not to monitor the international air distress net and not to respond to challenges was significantly negligent."

On July 11, Press Secretary Marlin Fitzwater announced that President Ronald Reagan had directed that compensation be paid to the families of the victims. "This offer of ex gratia compensation is consistent with international practice and is a humanitarian effort to ease the hardship of the families. It is offered on a voluntary basis, not on the basis of any legal liability or obligation," said Fitzwater. "The responsibility for this tragic incident, and for the deaths of hundreds of thousands of other innocent victims as a result of the Iran-Iraq war, lies with those who refuse to end the conflict."

The Iranian government said the shoot-down was not an accident, and accused the U.S. of either intentional criminality or a grossly negligent act.

A final settlement was reached via the International Court of Justice in 1996, in which the U.S. agreed to pay $61.8 million to the families.

Unlike the case of most air disasters, in which airlines retired the flight numbers of planes that have crashed, Iran Air continues to use Flight 655 on its Tehran-Dubai route.

Over the course of three days, three airliners operated by Transair Georgia were struck by rebel gunfire in the former Soviet Republic. On Sept. 21, a Tu-134 aircraft was hit by a surface-to-air missile and crashed near Sukhumi-Babusheri Airport, killing 27. The next day a Tu-154, also attempting to land at Sukhumi, was shot down; 108 people died. On Sept. 23, rebel mortar fire hit an aircraft during the boarding process; one crew member was killed when the plane caught fire.

One month after the 9/11 attacks, a Siberian Airlines Tu-154 flying from Tel Aviv to Novosibirsk in Russia crashed into the Black Sea off the Crimean coast; 78 people perished. While initial fears were of terrorism, the Ukraine government admitted (following several days of denials) that a radar-guided S-200 missile launched during military exercises had struck the plane after missing its drone target.

The Tamil Tiger rebels were blamed for the crash of a Lionair Antonov An-24RV that crashed into the sea off Sri Lanka, killing 55.